DNA Exclusive: How many 'Ravanas' among farmers at Singhu border? Whither is this movement going?

Zee News Editor-in-Chief Sudhir Chaudhary on Friday (October 15) discussed the brutal killing of a Dalit man on the Singhu border. 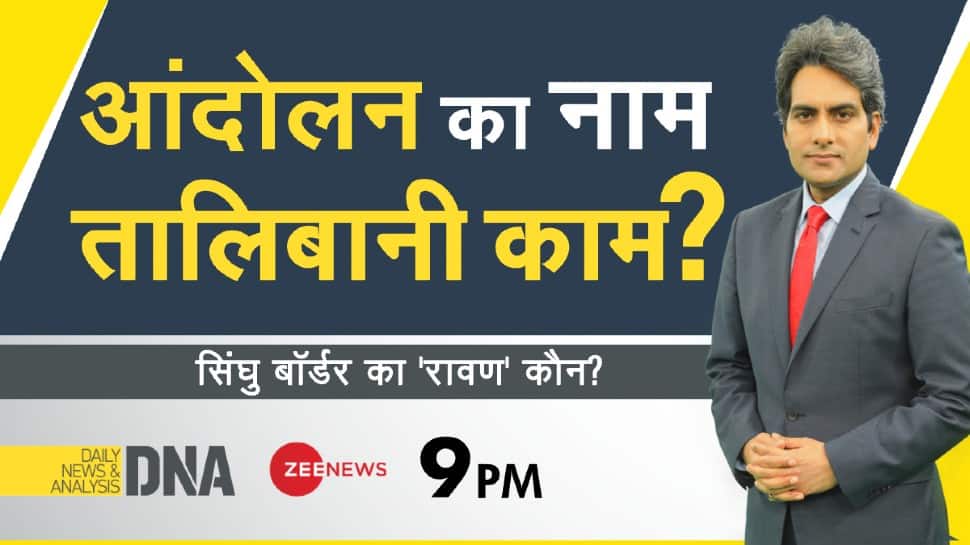 New Delhi: There are many Ravanas are roaming amongst us who are neither afraid of the police nor laws. This was evident from the incident that occurred at the farmers' protest site on the Singhu border. Shocking visuals of a man's body with his left wrist severed was witnessed this morning. The body was found tied to an overturned police barricade lying in a pool of blood on the ground. It seems that the farmers’ movement has now been hijacked by Taliban-like elements.

Zee News Editor-in-Chief Sudhir Chaudhary on Friday (October 15) discussed the brutal killing of a Dalit man on the Singhu border.

Hours after the incident, it came to light that some Nihang Sikhs were behind the heinous act over ‘sacrilege’. It was alleged that this person had insulted the Guru Granth Sahib. His arms and legs were chopped off and then was hanged and left to die.

The deceased was identified as Lakhbir Singh who was a resident of Tarn Taran in Punjab. He was a Dalit. Usually, there is a lot of politics in our country in the name of Dalits. The opposition leaders of our country do not miss a single opportunity to play politics on the pretext of violence against Dalits. But today, everyone is silent on Lakhbir Singh's murder.

The Nihang Sikh who can be seen in a video was repeatedly saying that those who insult their Guru will be punished like this. But the question is that even if this person had committed ‘sacrilege’, wouldn’t it have been appropriate to hand him over to the police. But in this case, the man was lynched on the spot.

The post mortem report revealed that Lakhbir Singh had more than 10 injury marks on his body and he died due to excessive bleeding.

After the incident, the dead body with severed hands and legs was left hanging in a public place. Was this an attempt to scare the common people? Such acts have often been witnessed in Afghanistan as the Taliban use similar tactics to instill fear among the people.

Haryana police have registered an FIR against some unknown people in this case and later a Nihang Sikh named Sarvjeet Singh was taken into custody.

The Samyukt Kisan Morcha has distanced itself from the incident. They said that they have nothing to do with the killers and the victim.

What happened on the Singhu border shows that now this farmers’ movement has been hijacked by violent people. It has been captured by people who consider a terrorist like Bhindranwale as their role model. So now the time has come to end this movement. Farmers should think about calling it off and the government should also take strict steps to put an end to this movement.

Uddhav Thackeray slams BJP, says Hindutva is under threat from those who used it to gain power