DNA Exclusive: Is killing of 'non-natives' justified in Kashmir? 'Toolkit' behind this conspiracy exposed

Zee News Editor-in-Chief Sudhir Chaudhary on Monday (October 18) discussed the targeted killings of civilians in Jammu and Kashmir and exposed the ‘toolkit’ behind the terror conspiracy. 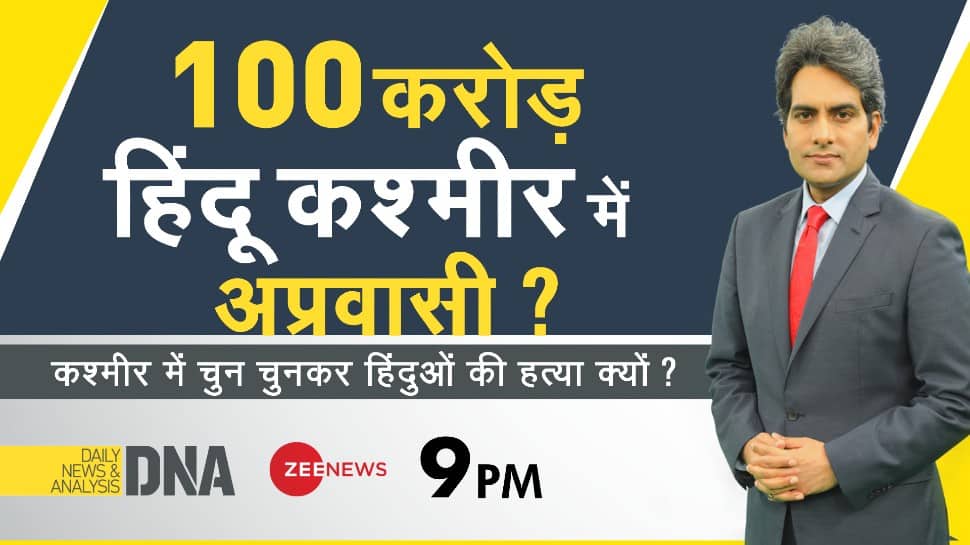 New Delhi: A disturbing pattern has emerged in Kashmir these days in which any person found to be non-Muslim, especially if they belong to another state, is being killed by terrorists. The footprints of Pakistan's ISI and Afghanistan's Taliban are clearly visible in this conspiracy.

Zee News Editor-in-Chief Sudhir Chaudhary on Monday (October 18) discussed the targeted killings of civilians in Jammu and Kashmir and exposed the ‘toolkit’ behind the terror conspiracy.

A large number of Hindus are migrating away from Kashmir's districts like Kulgam, Pulwama and Budgam due to fear of terrorists. However, a section of people is calling them “non-natives” i.e. citizens of other states of India.

The Constitution of India gives equal rights to the citizens of the country. It does not discriminate on the basis of religion, caste and state identity. But this discrimination is happening in Kashmir with people who have gone from other states of the country.

In Kashmir, when terrorists kill a person from another state, terms like “non-native” are used by some people. The question is: Should 100 crore Hindus be considered immigrants in Kashmir?

So far 11 people have been killed in Kashmir this month and most of them are those who came from other states in search of work. In all the attacks so far, the terrorists first checked the victim’s identities and then killed them.

While terrorists are targeting Hindus in Kashmir, a certain section of our country is silent on this. Imagine what would have happened if the workers of Bihar were killed in this manner in Gujarat. Many human rights organisations would have spoken up against it and called it an attack on democracy. But this has not happened in Kashmir so far. All opposition leaders and international organisations are silent on this. How can the killings in Kashmir be different from the murders that took place in Lakhimpur Kheri?

People should understand the pain of Hindus migrating from Kashmir.

After the Taliban captured Afghanistan, we had said that Kashmir would be the next target. It certainly seems to be happening. The footprints of the Taliban and Pakistan's intelligence agency ISI are clearly visible behind the killing of Hindus in Kashmir.

The recent attacks in Kashmir are being carried out according to a ‘toolkit’ through which the terrorists plan to turn Kashmir into Kabul.

As per the toolkit:

About a month ago, terrorist organisation Al-Qaeda had announced that after Kabul, they will establish Islamic rule in Kashmir. It looks like they have started making their move by killing the Hindus.