DNA Exclusive: The Great Wall of QUAD to corner China in Indo-Pacific, PM Modi's US visit, and India's global diplomacy; read all here

Zee News Editor-in-Chief Sudhir Chaudhary on Wednesday (September 22) discussed the significance of PM Modi’s US visit during which India will deliberate on a range of issues on the global fora. 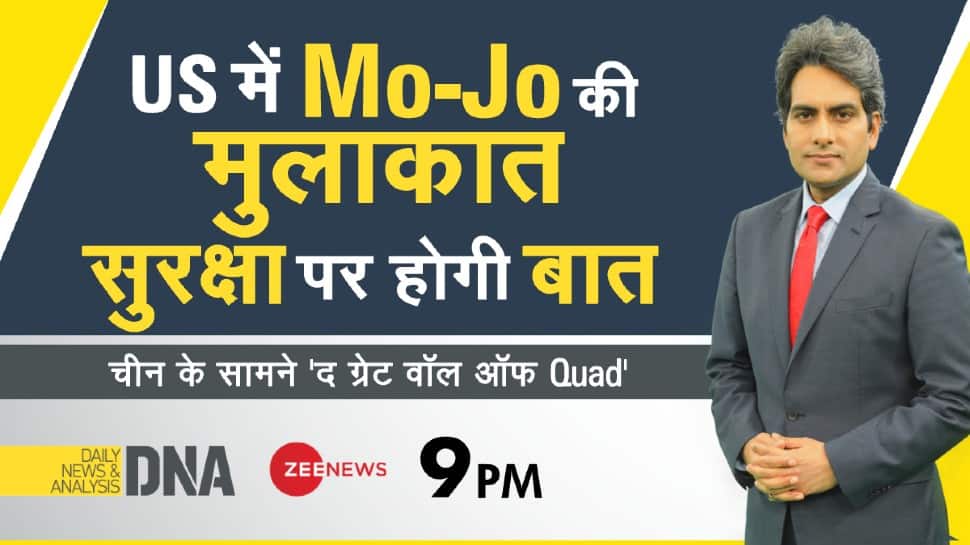 New Delhi: Prime Minister Narendra Modi has left for the United States on a three-day visit. During these three days, he will interact with many big leaders of the world including US President Joe Biden and will also give a speech at the United Nations. The QUAD meeting is also set to take place which will see the US, Australia, Japan and India discussing crucial issues including ways to limit China’s influence in the Indo-pacific region.

Zee News Editor-in-Chief Sudhir Chaudhary on Wednesday (September 22) discussed the significance of PM Modi’s US visit during which India will deliberate on a range of issues on the global fora.

Before leaving for the US, PM Modi said that he will discuss strategic partnership and global issues with US President Joe Biden on this visit. Among them may also be the issue of China and Afghanistan.

Modi will also meet US Vice President Kamala Harris. This will be his first meeting with Harris, in which both the leaders will discuss cooperation in the field of science and technology.

Modi will reach Washington DC at 6 pm on September 22 according to local time (9:30 am IST of September 23).

His first meeting will be with the CEOs of five big companies, after which he will meet the Australian Prime Minister Scott Morrison. He will then go on to meet Kamala Harris.

He will meet Joe Biden on September 24. This will be the first meeting between the two since Biden became the President. The same day, the four QUAD nations will hold a meeting.

On September 25, Modi will address the UN General Assembly.

QUAD is a grouping of four countries India, Australia, Japan and America and in terms of global diplomacy, it can become a big platform against China. Some of the most important issues to be discussed here would be related to China.

The first issue likely to be discussed would be to reduce the influence of China in the Indo-Pacific Region. The second issue could be COVID-19, which again is related to China. The third issue would be to create a new vaccine supply chain. This issue would also be a move to corner China.

At present, China is the country that is supplying COVID vaccines to maximum countries. The four QUAD countries want to counter that. For this, discussions could be held on manufacturing 100 crore doses of Johnson & Johnson vaccine in India. This will help weaken China’s soft power.

The fourth issue to be discussed could be Afghanistan, where China's control has increased after the withdrawal of the US forces. The QUAD countries would not that to happen. So there can be a discussion on chalking out a new strategy on this issue.

The biggest challenge for India on this tour is the new trilateral security pact between Australia, the UK and the US and which has been named AUKUS. The fact that it happened just a week before PM Modi’s tour is a cause for concern. Under this pact, the US will share Nuclear-Powered Submarines technology with the UK and Australia. This security pact also aims to reduce the influence of China in the Indo-Pacific region, just like QUAD. However, India has not been included in this grouping which could be an issue.

QUAD was formed in the year 2007, but after two years it was shelved. It was reactivated again in 2017, when China's interference in the South China Sea and Asia started increasing. In March this year, its first Leadership Summit was held, which was virtual. This shows that the rest of the QUAD countries want to counter China and they know in order to do that India would have a crucial role to play.

Also Read: International travel should be made easier through mutual recognition of vaccine certificates: PM Modi

International travel should be made easier through mutual recognition of vaccine certificates: PM Modi