Prime Minister Narendra Modi on Saturday advised the probationary civil servants to take decisions in the national interest by following the mantra of "minimum government and maximum governance". 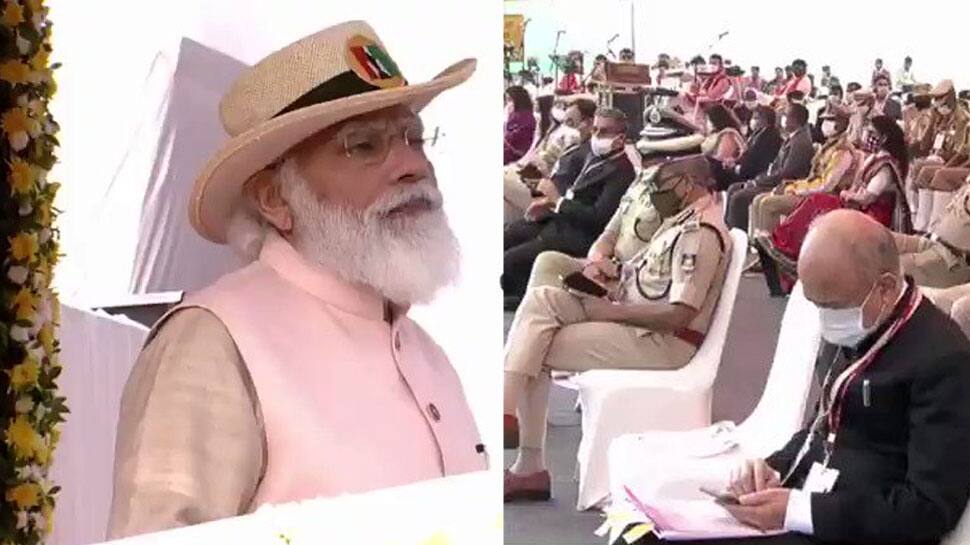 Ahmedabad: Prime Minister Narendra Modi on Saturday advised the probationary civil servants to take decisions in the national interest by following the mantra of "minimum government and maximum governance".

The PM also asked them to stay away from the limelight and go beyond their routine jobs to establish their identity.

PM Modi was addressing the probationers through video conference from Kevadiya in Gujarat's Narmada district, where he paid tributes to Sardar Vallabhbhai Patel at the Statue of Unity on his 145th birth anniversary earlier in the day.

"The turn at which the country stands today...The role of bureaucrats like you is of minimum government and maximum governance. You have to ensure that your interference in common people's lives is reduced and that they get empowered," he said.

"I would also request that whatever decision a civil servant takes should be in the national interest and aimed at strengthening the unity and sovereignty of the country and keeping India's constitutional spirit high," he said.

"Your area may be small, the limit of the department under you may be small, but there should be national perspective in your decisions," he said.

"A government does not run on policies alone. People for whom the policies are meant need to be involved. People are not the receiver of the government policies and programmes. They are the real driving force," he said, adding that the probationers should aim to move from government to governance.

"You will face two ways- one of comfort, name and fame, while another of struggle, difficulties and problems. But I can tell you from my experience that you will face real difficulties when you choose the easy way out," he said.

Modi said the probationers were entering the service at a crucial juncture when India is about to enter the 75th year of Independence.

"You will be at a crucial juncture of your career 25 years later when the country celebrates its 100th Independence Day. These 25 years between 75th and 100th years of Independence are a lot. And you are the people who will be part of the most important administrative system. You have a big responsibility in the coming 25 years to ensure the country's safety, security, the welfare of the poor and farmers, women and youth, and India's proper position at the global level," he said.

He said that Sardar Patel used to call bureaucrats the 'steel frame'. "The role of a steel frame is not just to support the system, but also to remind the country that they will fulfil the responsibility of taking the country forward successfully amid big crisis and difficulties like a facilitator," PM Modi added.

The Prime Minister said that achieving the big aim of nation-building and making India self-reliant may not be easy.

"When you go ahead facing all the challenges and work constantly to provide ease of living to people, then the results will be for the country to see," he said.
He said they should not work with the aim of coming into limelight but by remaining anonymous.

He asked them to stay away from "dikhaas aur chhapaas" (craving for getting published in newspapers and to be seen on TV) and not forget their own social roots.

PM Modi said they should do more than their routine job to establish their identity. He also asked the probationers to think about their role in fulfilling the dream of 'Aatmanirbhar Bharat'

"Sardar Patel dreamt of 'Ek Bharat-Shreshtha Bharat'. His dream was attached to the idea of 'Aatmanirbhar Bharat'," he said.

"During the coronavirus pandemic, we have learnt a big lesson of self-reliance," he said, adding that the country also became an exporter of defence equipment for which it was once dependent on other countries.