The police has removed the piece of cloth and registered an FIR. 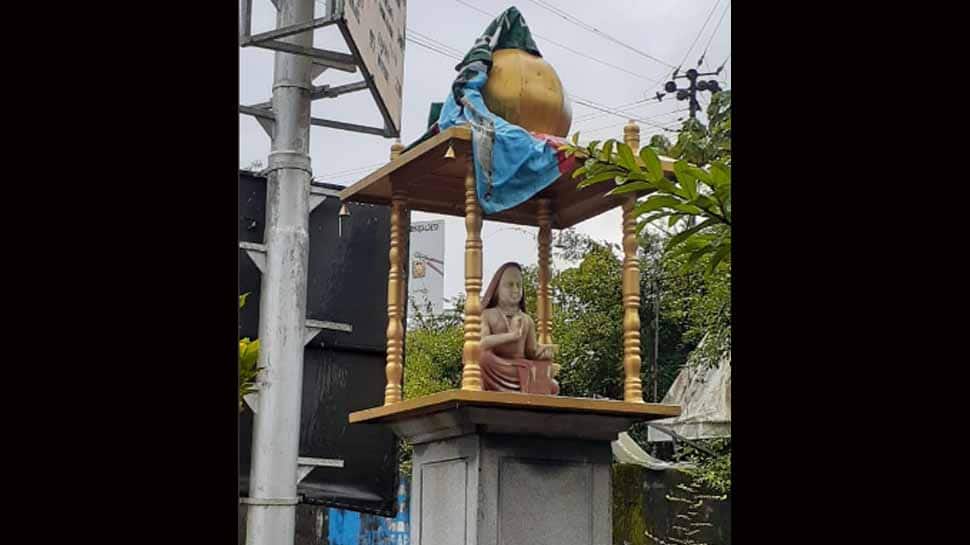 Bengaluru: Days after the riots in Bengaluru which left 3 people dead and over 50 injured, an incident of a flag cloth thrown over the statue of Shankaracharya in Sringeri taluk of Chikkamagaluru on Thursday morning has angered the locals. A special team has been formed to probe the incident, which has triggered tension in the district.

Meanwhile, BJP spokesperson S Prakash claimed that there was a connection between the violence in Bangalore and the incident in Chikkamagaluru and demanded answers from the Congress.

"There is a connection between the incident in Bangalore and Chikkamagaluru. Ever since the violence in Mangaluru, continuous efforts were being made to spread violence in the state. Got a chance this time. Now the husband of Congress councilor is arrested along with SDPI, Kalim Pasha is close to KJ George, Congress must answer. DK Shivkumar and Siddaramaiah must explain about their role in the riots."

Other BJP leaders have expressed their anger at the incident and have ordered an inquiry into the matter.

Kannada and Culture and Tourism Minister CT Ravi said, "It is learned that the SDPI flag has been placed on the statue of Sri Sankaracharya at Sringeri and I have instructed the District Police Chief to investigate and take action against the guilty. All must cooperate to maintain law and order."

She wrote, "Intolerance of SDPI is touching peak! Anti social elements are inciting people to propagate their sinister agendas. I condemn the incident of planting SDPI flags on Sri Shankaracharya's statue at Sringeri, serious action will be taken against those who are behind this incident!"

Intolerance of SDPI is touching peak!

I condemn the incident of planting SDPI flags on Sri Shankaracharya's statue at Sringeri, serious action will be taken against those who are behind this incident! pic.twitter.com/j1S337SR0Z

The locals are connecting this incident with the violence that took place in Bengaluru a few days ago. On August 11, an angry mob attacked the house of Pulakeshinagar MLA Akhanda Srinivas Murthy over an alleged derogatory social media post by the Congress leader's relative. The police opened fire at the unruly mobs and three people died in police firing while over 50 people were injured in the violent clashes.