Although the water level has receded to a large extent in most of the affected parts, the floods have left a trail of large-scale damage - from sludge and heaps of mud in the houses and roads to the loss of loved ones. 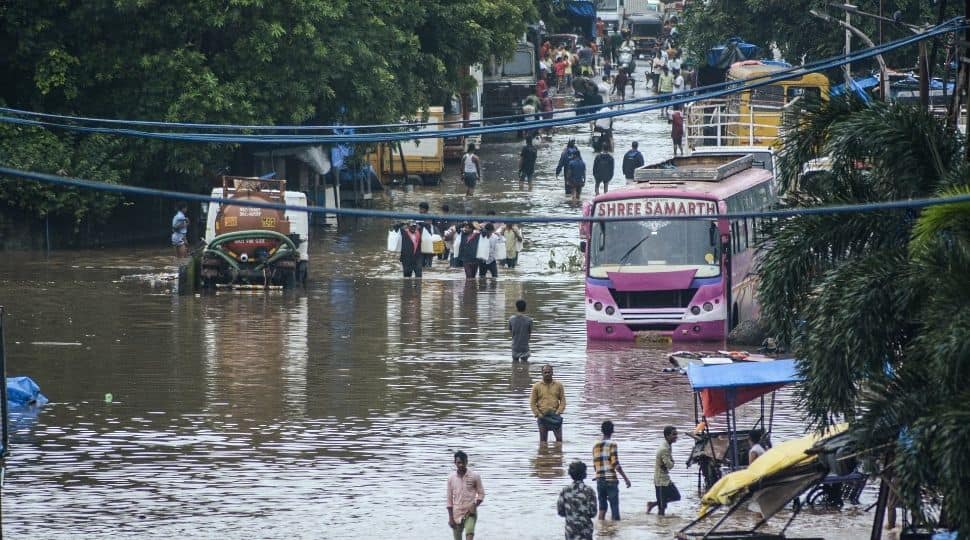 Mumbai: When heavy rains started pounding Chiplun town in Maharashtra's Ratnagiri district on July 21, little did Pragati Rane, who runs a small coaching centre there, think that things could escalate to the level that she, her family, and others would have to scale the sloped roofs of their houses and sit there precariously through the night amid the downpour, clinging on to hope.

Although their nightmare ended after the National Disaster Response Force (NDRF) rescued them hours later, an uphill task of rebuilding their own lives now awaits Rane and scores others like her.

Chiplun, Khed, and several other towns in Ratnagiri and parts of neighboring Raigad bore the brunt of the torrential rain and the subsequent floods over the last few days, with several rivers in the region flowing above the danger mark.

Although the water level has receded to a large extent in most of the affected parts, the floods have left a trail of large-scale damage - from sludge and heaps of mud in the houses and roads to loss of loved ones.

"It was raining heavily on 21 July. But I thought that the water level will rise for a few hours and then recede. However, due to the incessant downpour, the water level suddenly rose during the night and we all had to leave everything behind and reach the sloped clay-tiled roof of the house," Rane said.

"We were rescued by the NDRF team the next evening, It was a horrible experience for me" Everything we had in the house is permanently damaged. I have lost many kitchen utensils and other things," she said.
The situation in Khed and Mahad towns was no different.

Mujaffar Khan from Mahad, who runs a photocopy shop, said, "After running the shop till 4 pm, I went home by 5 on July 21. After that, the downpour was so heavy that I could not visit the shop after that. I could only go there today morning. The road to the shop was first under water and now there is a thick layer of mud."

"I have no idea how to remove the mud because it is not just the layer of soil, there are dead animals in it, like rats. The whole lane is stinking. We have approached the local authorities but everyone is burdened with work right now," he said.

The Maharashtra government has said that 76 people have died and 30 have gone missing in the flood-hit parts of the state.

After the floods, the major challenge before the administration is supplying drinking water, food and medicines to the affected people.

"Several schools, as well as some private properties, are currently used as shelters as well as primary treatment centres for the injured people. The real challenge is identifying missing people and helping them to trace their relatives," a senior official of the NDRF said.

Maharashtra minister Uday Samant, who hails from Ratnagiri, has been holding meetings with local officials in Ratnagiri to expedite the officials' works.

"Water has receded from some areas of Chiplun town, but some areas are still inundated. I have held a special meeting with the representatives of various insurance companies and asked them to expedite the claims of property damage as well as of loss of human lives," he told reporters.

A senior official from Ratnagiri district collectorate said, "The topography of Chiplun town is like a bowl. No matter where it rains around it, the water reaches the city streets. The local residents have experienced roads getting under water for a few hours. But this time it was different. At many places, the water level was way above 10-14 feet, due to which entire houses or ground floors got submerged in water."

The first challenge we faced was making drinking water available to people, who were rescued as well as stuck in their houses. With the help of rescue teams and some locals, this arrangement was made till we received official help by Friday morning, he said.