The flood situation has taken a critical turn in Assam and parts of Bihar after incessant rains lash the states. 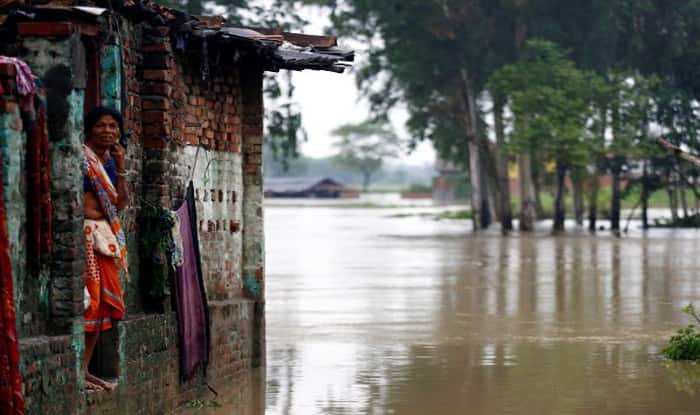 A woman looks out from her house at a flood affected area in Janakpur. (Image courtesy: Reuters)
Share:
Written By:

New Delhi: The flood situation has taken a critical turn in Assam and parts of Bihar after incessant rains lash the states.

The second wave of deluge on Sunday claimed lives of 10 more people and affected nearly 22.5 lakh people in 21 districts of the north eastern state. Assam State Disaster Management Authority today said,"With today's deaths, the toll in this year's flood-related incidents has gone up to 99. The situation is likely to worsen as waters of the Brahmaputra and 10 other rivers were flowing above the danger mark at 15 places."Reports state that most of the forest areas in Kaziranga National Park, Pobitora Wildlife Sanctuary and Lawkhua wildlife sanctuary were submerged under water. Nagaon Deputy Commissioner Shamsher Singh said the waters of the Brahmaputra river breached a crucial dyke at Hatimura inundating vast areas of the district.

Dhubri was reportedly the worst-affected with 3.98 lakh people affected, followed by Morigaon with 3.14 lakh people. Chief Public Relations Officer of Northeast Frontier Railway Pranav Jyoti Sharma said 22 trains have been cancelled while 14 others were stranded at various places as the tracks are flooded at places across the northeast.

Following the havoc in the state, Prime Minister Narendra Modi called up Assam Chief Minister Sarbananda Sonowal, who toured various flood-affected areas in Dibrugarh district, an official release claimed. "The prime minister expressed concern and assured all possible help and support to the state government in handling the situation," the release further said.

On the other hand, heavy rainfall in Trai regions of Nepal and Seemanchal since yesterday have deteriorated the situation in Kishanganj, Purnea, Araria and Katihar districts of Bihar. Darbhanga, Madhubani, Sitamarhi, Madhepura, Saharsa, Supaul, East and West Champaran are the other affected districts. If reports are to be believed, railway stations in Kishanganj, Katihar and Jogbani in Araria were flooded by water, leaving scores of passengers stranded.

As per the officials, 10 persons, including women and children, have been killed in the floods so far and nearly two million people have been affected by the floods. Thousands have been forced to evacuate their homes. Crops worth crores were damaged and road link to several places had been snapped.

Taking stock of the situation, PM Narendra Modi on Monday spoke to Bihar CM and assured all support to the state government.

"My thoughts are with all those affected by floods in parts of Bihar. The situation is being monitored closely. Centre assures all support to Bihar government to mitigate the flood situation. Teams of NDRF are in Bihar for rescue and relief work," the PMO quoted Modi as saying.

PM @narendramodi has spoken to Bihar CM @NitishKumar regarding the flood situation in parts of the state.

My thoughts are with all those affected by floods in parts of Bihar. The situation is being monitored closely: PM @narendramodi

Centre assures all support to Bihar government to mitigate the flood situation. Teams of @NDRFHQ are in Bihar for rescue and relief work: PM

Reports claimed that the flood situation in Bihar will continue to be grim following rising water levels in rivers and incessant rains. Major rivers in the state including the Koshi, Mahananda, Gandak, Bagmati and Ganga are in spate, officials said.