If not Om, then what: Defence Minister Rajnath Singh blasts Congress on Rafale 'shastra puja'

The Defence Minister also took a jibe on former Congres president Rahul Gandhi who was first among those who questioned the Rafale 'Shastra puja'. 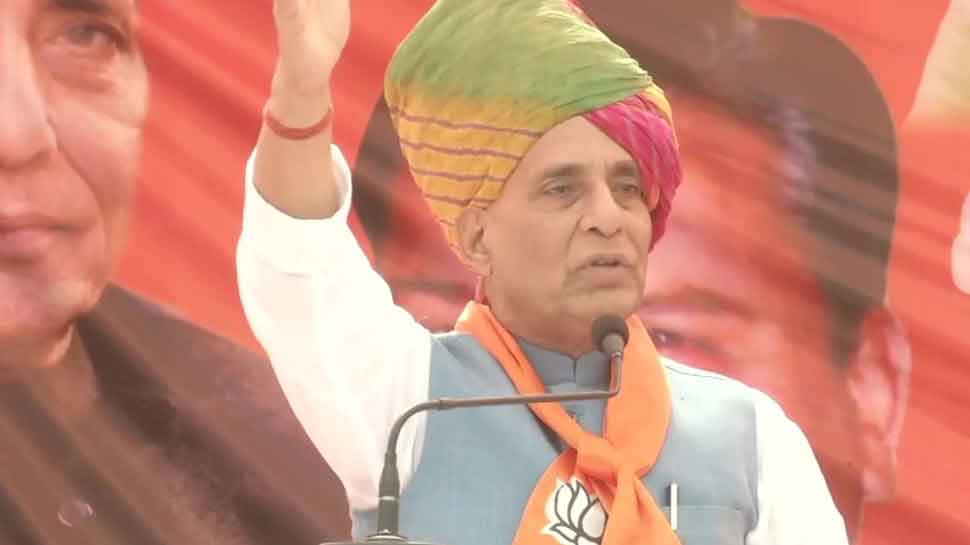 CHANDIGARH: Defence Minister Rajnath Singh on Thursday made a blistering attack on the Congress party and its leaders for questioning the 'shastra puja' (weapon worship) performed by him after receiving the first Rafale fighter jet in France recently.

The Defence Minister also took a jibe on former Congres president Rahul Gandhi who was first among those who questioned the Rafale 'Shastra puja'.

“When I wrote Om on the Rafale jet, people said why did he write. I would like to ask Rahul Gandhi if not Om what should I have written on the aircraft,” Rajnath said while addressing a rally in Haryana.

Hitting back at the Congress, the veteran BJP leader said that worshipping weapons during Vijayadashami has been a tradition.

It may be recalled that Rahul Gandhi had said that Rajnath Singh had gone to Paris to receive the first Rafale jet because there was “guilt” in the minds of BJP leaders over the multi-crore deal.

“It seems the Rafale deal is still hurting the BJP. Why else would Rajnath Singh go to France to receive the first jet?” the Gandhi scion had said.

In his speech, the Defence Minister Singh also slammed the Congress party over its stand on the Centre's recent Kashmir move.

Defending the government's move, Singh reiterated that Jammu and Kashmir is an internal matter of India and will;l always remain so.

''I want to ask the Congress party, do they want to internationalise the Kashmir issue?'' the Defence Minister said.

In the run-up to the 2019 Lok Sabha election, Congress led by Rahul Gandhi had attacked Prime Minister Narendra Modi over the Rafale fighter jet deal with France and alleged there were “irregularities” in it.

At the handover ceremony for the fighter aircraft, he said it was a “historic” moment for India and performed a puja on the jet, inscribed it with an 'Om' tilak and then took a 35-minute sortie in the two-seater aircraft.

The Congress-led Opposition, however, targeted him with several leaders, including Mallikarjun Kharge and Rahul Gandhi, calling it “theatrics”.

Nationalist Congress Party chief Sharad Pawar drew a parallel between the Rafale 'shastra puja' and the lemon and chilli hung by truck drivers to protect their vehicles from “evil eye”.