PM Narendra Modi once again launched a piercing attack against Congress and said the party has insulted voters by saying their own defeat in the Lok Sabha election was the defeat of the electorate. 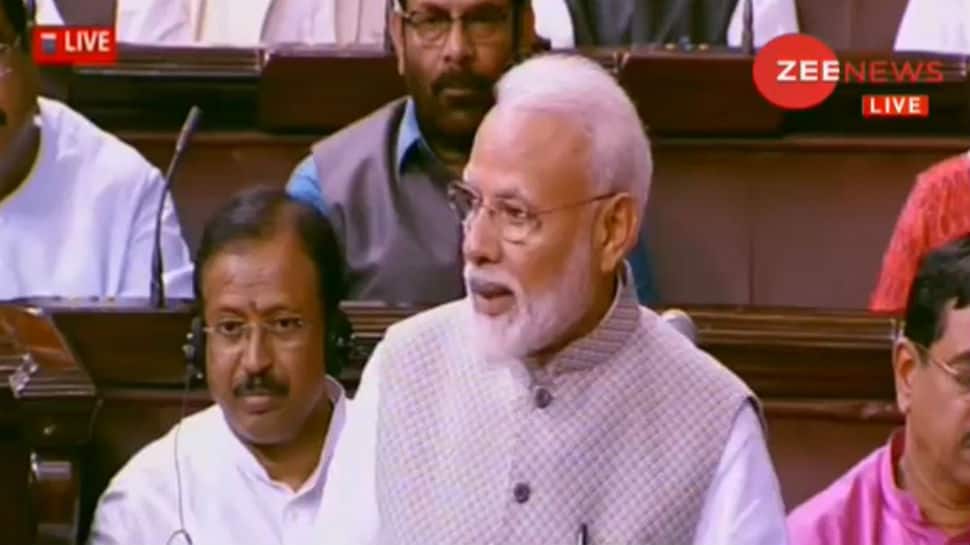 New Delhi: A day after launching an absolutely scathing attack against the Congress in Lok Sabha, Prime Minister Narendra Modi on Wednesday flayed the party during his speech in Rajya Sabha as well. Accusing Congress of being bloated with pride, he said that the party had insulted voters by saying their loss in the recent Lok Sabha election was the loss of the country.

In yet another unflinching assault against Congress, PM Modi said that the party is guilty of questioning India's democracy that is as vibrant as ever. "I was saddened when some (Congress) leaders said- the BJP and allies won the elections but the nation lost, democracy lost. I want to clearly say that such statements are unfortunate," he said. "Do our friends in the Congress Party feel if they do not win, India does not win? Are India and the Congress Party the same thing? No, they are not. It is important to respect our electoral process and democracy. I want to tell Congress that you have a problem. You cannot digest wins and cannot accept defeats."

My friends in the Congress:

They have not been able to digest victory.

They have not been able to accept defat.

I do not consider this to be a healthy sign in a democracy: PM @narendramodi

Saluting voters for exercising their franchises, PM Modi said that casting aspersions on the result and raising doubts on the election process is an insult to not just the electorate but also to countless Election Commission officials, polling agents as well as security forces who worked tirelessly for a free and fair election. "When you do not have faith in your own abilities, excuses are thought of. They blame EVMs because they are unwilling to find flaws within themselves," he said. "I want to tell them (political parties questioning EVMs) - there was a time when we were two MPs in the Parliament. People mocked us. But, we worked harder and won the trust of people. We did not make excuses and blame the polling booth."

PM Modi was replying to the 'Motion of Thanks on the President's Address' in which he also called for constructive suggestion from the Opposition towards the ultimate goal of nation-building. "Congress is in the habit of mocking everything. Stop mocking India's mandate. Let us come together, we welcome good suggestions from everyone."

Expressing his dismay over the recent mob lynching incident in Jharkhand, PM Modi said that while the death was extremely unfortunate, it was incorrect to slam the entire state for it. "Some of their leaders said that Jharkhand has become the adda of mob violence. In this way, they will never be able to see the good that also exists. Law must and will take its course. The entire country stands against mob lynching," he said, adding that he is also saddened by the death of children in Bihar due to Acute Encephalitis Syndrome.

The lynching in Jharkhand has pained me. It has saddened others too.

But, some people in the Rajya Sabha are calling Jharkhand a hub of lynching. Is this fair? Why are they insulting a state.

None of us have the right to insult the state of Jharkhand: PM @narendramodi

The attacks against Congress, however, formed the bulk of  PM Modi's speech in Rajya Sabha - his second - and equally intense - attack in as many days. In Lok Sabha on Tuesday, he had accused the party of being totally cut off from the roots. "It is tough to cure the disease of 70 years in five years," he had said.