While the situation in Kerala and Karnataka have improved to an extent, torrential rains and flood-like situation wreaked havoc in several other parts of India and threw the normal life out of gear. Many rivers and dams are overflowing and authorities have issued high alert. 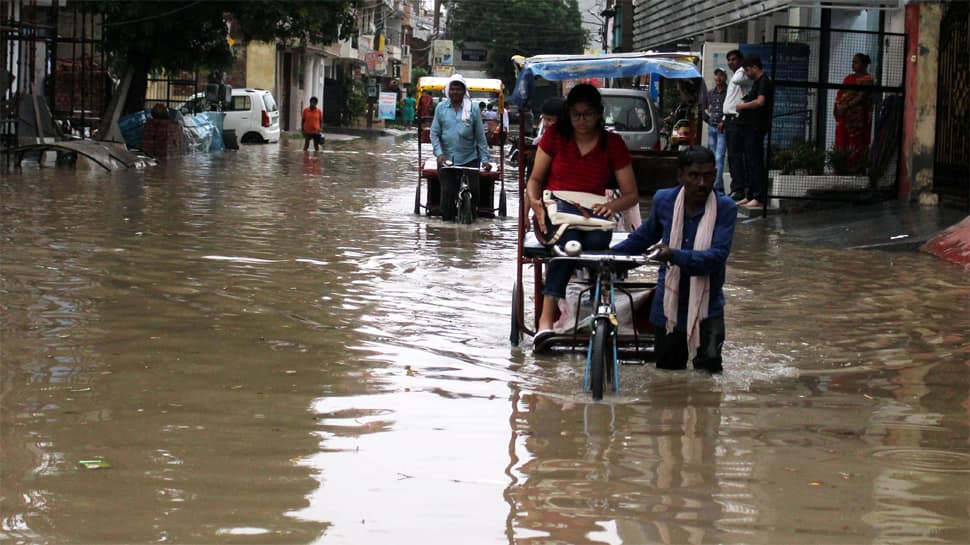 While the situation in Kerala and Karnataka have improved to an extent, torrential rains and flood-like situation wreaked havoc in several other parts of India and threw the normal life out of gear. Many rivers and dams are overflowing and authorities have issued high alert.

The India Meteorological Department (IMD) has issued a red alert in Himachal Pradesh in the wake of incessent rainfall observed in the state in last 24 hours. Meanwhile, the MeT department has also forecast that there are high chances of heavy showers in Delhi, West Bengal, Odisha, Jharkhand , Uttarakhand,  Punjab, Haryana and Chandigarh in next 24 to 48 hours and therefore, they have issued an orange alert to the authorities to prepare for necessary actions in these states.

"The Low Pressure Area now lies over central parts of Haryana. A constructive interaction between the monsoon low and the current Western Disturbance is likely to cause widespread rainfall with isolated heavy to very heavy falls over Jammu & Kashmir, Himachal Pradesh, Uttarakhand, Punjab and Haryana, Chandigarh & Delhi during next 24 hours," the weather department said.

"Under the influence of a cyclonic circulation lying over West Bengal and adjoining Bangladesh, fairly widespread to widespread rainfall with isolated heavy to very heavy falls likely over Gangetic West Bengal, Odisha, Jharkhand and Bihar during next 2 days," it added.

The national capital and its surrounding areas woke up to light to moderate rains on Sunday morning, providing some relief from the heat. The minimum temperature in the city was recorded at 24°C, while the maximum temperature is likely to reach upto 32°C.

However, the downpour caused waterlogging and affected vehicular as well as pedestrian movement in several parts of Delhi. Traffic was severly affected at several major junctions like AIIMS, DND Flyover, Dhaula Kuan, Pitampura and Kamla Nagar among others. Obstruction in traffic was also observed on Mehrauli-Badarpur Road due to waterlogging near Prahladpur.

Meanwhile, the water level of Yamuna river is constantly increasing due to continuous rainfall in the mountains. The administration recently released 2 lakh 57 thousand cusecs of water from Yamunanagar Hathnikund barrage in Haryana. People staying near adjoining areas along the Yamuna have also been issued alert by the administration.

The Irrigation department has declared a high flood in the area and informed the Delhi Irrigation Department about the same. The Yamuna water is expected to knock in Delhi in next 72 hours.

Meanwhile, Punjab Chief Minister Amarinder Singh has ordered a high alert and directed all the Deputy Commissioners to monitor the situation in the state closely amid a forcast of heavy rainfall.

Due to the realease of excess water from Bhakra dam through the spill gates in the wake of heavy rainfall since Saturday, water has entered many villages of Anandpur Sahib. The release of water has also resulted in waterlogging, thus affecting vehicular as well as pedestrian movement in the city.

The Bhakra Beas Management Board authorities have discharged 50,000 cusecs of water through the spill gates.The dam recorded a water level of 1,674 feet which is expected to raise to 1,682 feet.