India and Russia inked a deal for joint production of over six lakh AK-203 rifles in Uttar Pradesh, and also signed 28 MoUs and agreements including that on a programme of the Military-Technical Cooperation from 2021-2031. 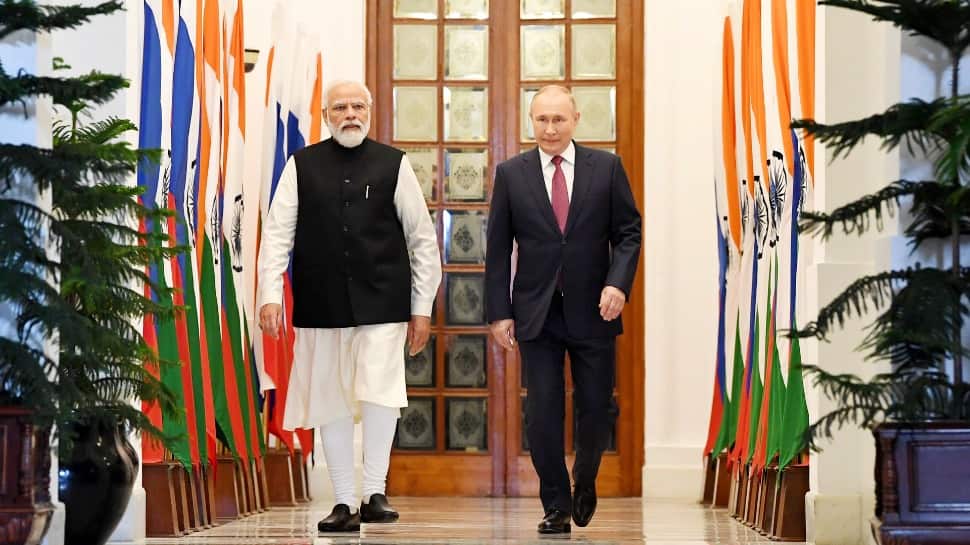 New Delhi: Hours after India and Russia held their maiden 2+2 dialogue, Prime Minister Narendra Modi and Russian Vladimir President Putin held the 21st annual summit on Monday. They also discussed the evolving situation in Afghanistan, especially the security situation and its implications in the region, besides condemning the cross-border movement of terrorists.

Both the nations inked a deal for joint production of over six lakh AK-203 rifles in Uttar Pradesh, and also signed 28 MoUs and agreements including that on a programme of the Military-Technical Cooperation from 2021-2031.

Here are the key points of Russian President Vladimir Putin`s "short but highly productive and substantive" visit for the annual summit. 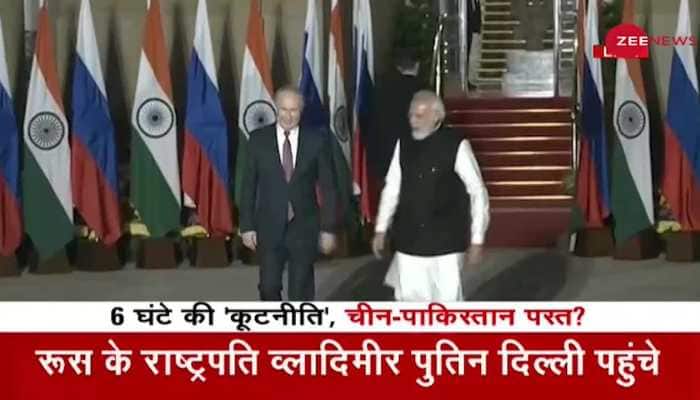 -The Prime Minister said the two countries are adopting a long-term vision to deepen the relationship in the economic sector and have set a target of $30 billion in trade and $50 billion in investment by 2025.

- Russian Putin, whose visit to India was only his second foreign visit since the outbreak of COVID-19, said Russia views India "as a major power, whose people have been very friendly to us", adding "Our relations proceed from a very positive foundation. They are developing and forward-looking."

- A 99-point comprehensive joint statement covering various aspects of the ties including cooperation in the space sector was issued after the talks that were held "in a warm and friendly atmosphere".

-Foreign Secretary Harsh Vardhan Shringla said at a media briefing after the summit, "There were excellent discussions between the two leaders. This is President Putin second visit out of Russia since the COVID-19 pandemic began. The only visit he has undertaken was the brief visit to Geneva for the Russia-US summit." "The fact that the Russian president has decided to visit India for the annual summit exceptionally is an indication of the importance he attaches to the bilateral relationship and also his personal rapport," he added.

- PM Modi and President Putin expressed satisfaction at the sustained progress in the `Special and Privileged Strategic Partnership` between both countries despite the challenges posed by the Covid pandemic. They welcomed the holding of the first meeting of the 2+2 Dialogue of Foreign and Defence Ministers and the meeting of the Inter-Governmental Commission on Military and Military-Technical Cooperation.

- The statement said the two sides positively assessed the multi-faceted India-Russia relations that span various areas of cooperation including political and strategic, economy, energy, military and security, science and technology, culture and humanitarian cooperation. They noted that while the traditional areas of cooperation are being further strengthened, new drivers of growth have led to diversification and expansion of bilateral cooperation.

- The role of connectivity through the International North-South Transport Corridor (INSTC) and the proposed Chennai - Vladivostok Eastern Maritime Corridor figured in the discussions.The leaders discussed regional and global developments, including the post-pandemic global economic recovery, and the situation in Afghanistan.They agreed that both countries share common perspectives and concerns on Afghanistan and appreciated the bilateral roadmap charted out at the NSA level for consultation and cooperation on Afghanistan.

- "The leaders reiterated strong support for a peaceful, secure and stable Afghanistan while emphasizing the respect for sovereignty, unity and territorial integrity and non-interference in its internal affairs. They also discussed the current humanitarian situation and decided to provide immediate humanitarian assistance to the Afghan people," the statement said.

- The leaders emphasised that Afghanistan`s territory should not be used for sheltering, training, planning or financing any terrorist groups including ISIS, Al Qaeda and Lashkar-e-Taiba."They reaffirmed their firm commitment to combat terrorism in all its forms and manifestations, including its financing, the dismantling of terrorist infrastructure and countering radicalization, to ensure that Afghanistan would never become a safe haven for global terrorism," the statement said.

- President Putin extended an invitation to Prime Minister Modi to visit Russia for the 22nd India-Russia Annual Summit in 2022.

Bihar Police Constable Result 2021 declared by CSBC at csbc.bih.nic.in, here's how to check