PM Modi and his British counterpart Theresa May held "fruitful discussions" on Wednesday on multiple aspects of the India-UK relations. 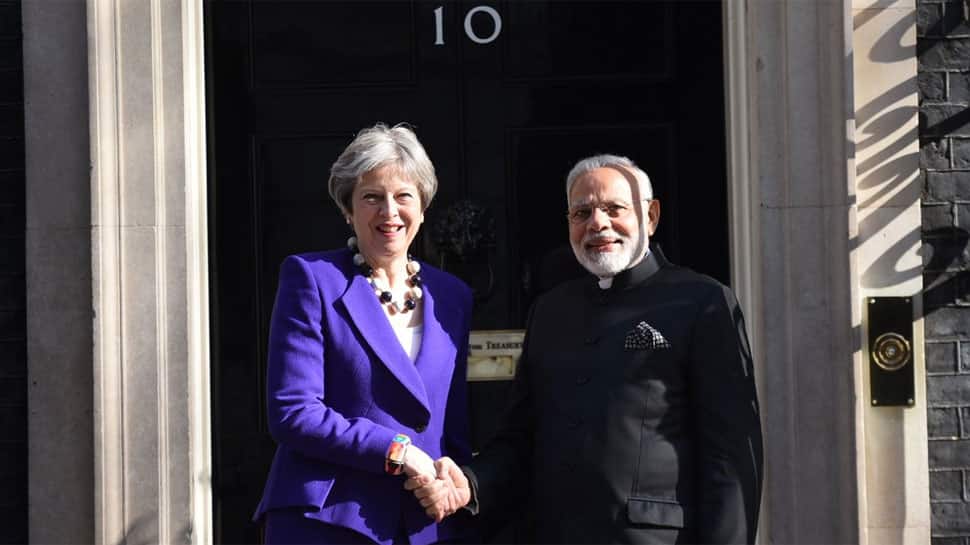 London: Prime Minister Narendra Modi and his British counterpart Theresa May on Wednesday agreed to infuse new energy into Indo-UK bilateral ties post-Brexit. They also vowed to strengthen cooperation in taking decisive action against globally-proscribed terror groups such as Pakistan-based Jaish-e-Mohammad and Lashkar-e-Taiba.

The two leaders reiterated their strong condemnation of terrorism in all its forms including terror-related incidents in both India and the UK. They affirmed that terrorism cannot be justified on any grounds whatsoever it may be and it should not be associated with any religion, creed, nationality and ethnicity.

The leaders agreed that terrorist and extremist organisations like LeT, JeM, Hizb-ul-Mujahideen, Haqqani Network, al-Qaeda, ISIS and their affiliates, need to be denied space to radicalise, recruit and conduct attacks on innocent people and for this all countries need to work together to disrupt terrorist networks, their financing and movement of terrorists, including foreign terrorist fighters, a joint statement said.

Also, a statement by Downing Street said that the two leaders "reflected on the progress made on bilateral defence and security cooperation since the Prime Minister’s visit to India in 2016 and the agreement to a number of Defence Capability Partnerships in key strategic areas, with closer military-to-military ties underpinned by a succession of high-level visits and exchanges."

Very good to welcome you to the UK and discuss the many areas where we can work together for the future. https://t.co/FuJaQpsCTq

A warm welcome and a fire-side discussion! PM @narendramodi welcomed by @theresa_may @10DowningStreet. The two leaders had wide-ranging talks on redefining and infusing new energy into our bilateral engagement post-Brexit. pic.twitter.com/mj1a4addM3

This morning the PM @theresa_may met with India’s Prime Minister @narendramodi, continuing the strong relationship between India and the UK #CHOGM2018 https://t.co/WSFb3dfFMU pic.twitter.com/xRjHwnrmd6

"PM Modi said there would be no dilution in the importance of the UK to India post-Brexit. He said the City of London was of great importance to India for accessing the global markets and would remain so," the statement added.

"The Prime Minister (May) updated PM Modi on the progress of the UK's withdrawal from the EU, saying the implementation period agreed in March gives Indian companies and investors the confidence that market access will continue on current terms until the end of 2020," it further said.

On the other hand, PM Modi said, "A secure, free, open, inclusive and prosperous Indo-Pacific is in the interests of India, the UK and the international community."

The UK and India will also work together to tackle threats such as piracy, protect freedom of navigation and open access, and improve maritime domain awareness in the region.