Speaking at the Kargil Vijay Diwas commemorative function at the Indira Gandhi International (IGI) stadium in the national capital, PM Modi recalled instances--1948, 1965, 1971--when Pakistan tried to trick and conspire against Kashmir but India did not allow them to succeed in 1999. 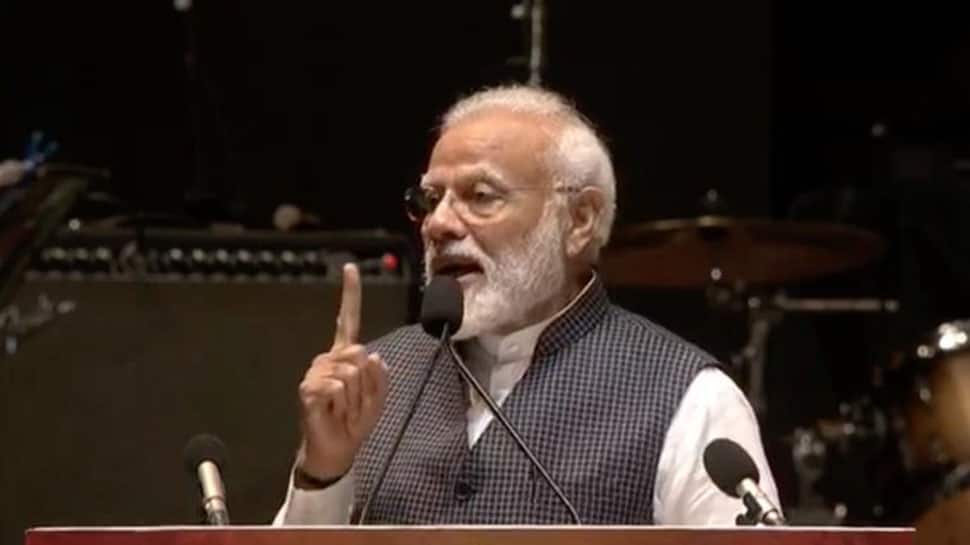 Prime Minister Narendra Modi on Saturday paid tribute to the martyrs of the 1999 Kargil War and said that when it comes to national security, India will not bow to pressure, or be found wanting in any manner. He also blasted Pakistan as it has repeatedly resorted to deceit in Kashmir.

Speaking at the Kargil Vijay Diwas commemorative function at the Indira Gandhi International (IGI) stadium in the national capital, PM Modi recalled instances--1948, 1965, 1971--when Pakistan tried to trick and conspire against Kashmir but India did not allow them to succeed in 1999.

PM Modi recalled the resolve of the then prime minister late Atal Bihari Vajpayee for an effective response to Pakistan, which the enemy had no answer to. He added that the earlier peace initiative of the Vajpayee government had created a better understanding of India's position, across the world.

The 20th anniversary of Kargil Vijay Diwas was on Friday observed across the nation to commemorate the success of ''Operation Vijay'' which was launched by the Indian Army to recapture the strategic Indian territories held by the Pakistani intruders in the Kargil-Drass sector in 1999.

The Prime Minister said conflicts have reached space, and the cyber world. Therefore, he added, the Armed Forces must be modernized. He said that when it comes to national security, India will not bow to pressure or be found wanting in any manner. In this context, he mentioned the establishment of India's nuclear triad through Arihant, and the testing of A-SAT (anti-satellite test).

He said the Armed Forces are being rapidly modernised, and efforts are being made to increase the participation of the private sector for "Make in India" in the defence sector. He stressed on the importance of "jointness" among the three wings of the Armed Forces. He said infrastructure is being strengthened in the border areas. He spoke of steps being taken for the development of border areas, and the welfare of people living there.

In his address, the Prime Minister said that every Indian is remembering today, an  inspirational saga of valour and dedication to the nation. He paid homage to the Martyrs, who laid down their lives, defending the heights of Kargil. He also appreciated the people of Jammu and Kashmir who fulfilled their duty towards the nation. He said the victory achieved in the mountains of Kargil, 20 years ago, will continue to inspire us for generations.

The Prime Minister asserted that wars are not fought by Governments alone, but by the entire nation. He said soldiers sacrifice their all, for future generations. He said the deeds of these soldiers are a matter of pride for the each and every Indian.

The Prime Minister said that he had visited Kargil just a few months after assuming office in 2014. He also recalled that he had visited Kargil 20 years ago, at the height of the Kargil war. Recalling the valour of the jawans in Kargil, he said that the entire country stood together with the soldiers. PM Modi said, "I had gone to Kargil 20 years ago when war was at its peak, the enemy was playing its games sitting on high peaks. Death was staring in the face yet our jawans carrying the tricolor wanted to reach the valley before anyone."

PM Modi expressed satisfaction that in the last five years, the Union Government has taken a number of decisions for the welfare of soldiers, and their families. In this context, he mentioned One Rank, One Pension; enhanced scholarship for wards of martyrs; and the National War Memorial.

The Prime Minister asserted that India has never been an aggressor, in history. The Indian Armed Forces are perceived as defenders of humanity and peace across the world. He recalled the liberation of Haifa in Israel by Indian soldiers, and the memorial in France for the Indian soldiers who laid down their lives during World War 1. He said over a lakh Indian soldiers were martyred during the World Wars; and even in UN peacekeeping missions, it is Indian soldiers who have made the supreme sacrifice in the highest number. He also mentioned the dedication and service of the Armed Forces in natural calamities.

PM Modi said that terrorism and proxy war pose a threat to the entire world today. He said those defeated in war, are resorting to proxy war, and supporting terrorism today, to achieve their political objectives. He said the need of the hour is for all those who believe in humanity, to stand in support of the Armed Forces. He said this is essential to effectively counter terrorism.

He called for a collective resolve to ensure, that these sacrifices do not go in vain, and seeking inspiration in the deeds of these martyrs, we make the India of their dreams.