With tensions between the two countries on a high, representatives from Indian Army, Air Force and Navy said that forces are on high alert and ready to thwart any Pakistani aggression. 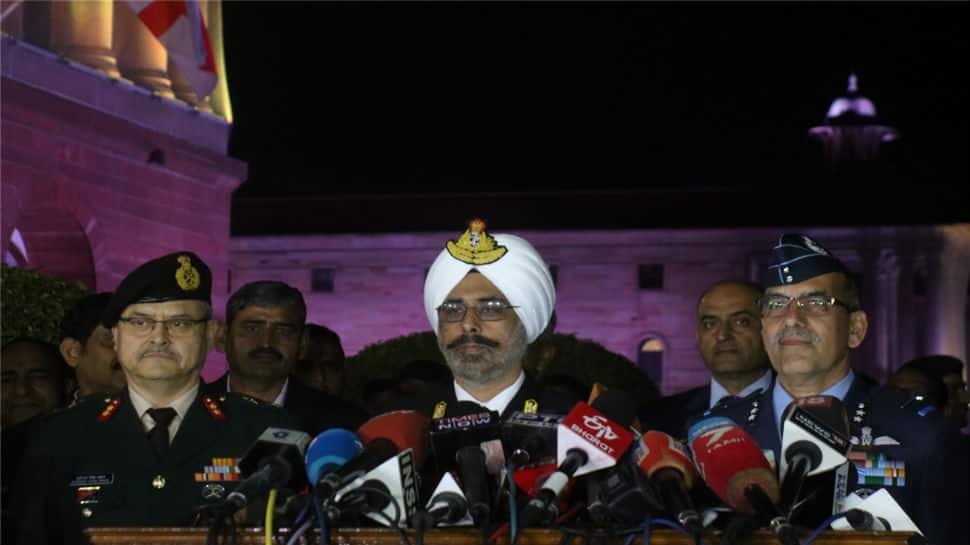 New Delhi: In a press briefing of all three wings of the Indian armed forces, Pakistan's numerous lies were busted with evidence even as the Indian Army, Air Force and Navy warned the neighbouring country to not attempt any misadventure.

With tensions between the two countries on a high, representatives from Indian Army, Air Force and Navy said that forces are on high alert and ready to thwart any Pakistani aggression.

On 27 Feb 19 at around 1000 hrs IAF radars detected a large package of  PAF aircraft heading towards the Indian territory towards general area Jhangar. They breached the Indian airspace west of Rajauri in Sunderbani Area.

The ingressing aircraft were observed to be at various levels. IAF fighters including MiG-21 Bison, Su-30 MKI, Mirage-2000 were tasked to intercept the PAF aircraft.

The PAF aircraft attempting to target military installations were intercepted by IAF fighter aircraft which thwarted their plans.  Although PAF bombs have fallen in Indian Army Formation compounds however they were unable to cause any damage to our Military Installations.

In the aerial combat that ensued one F-16 of PAF was shot down by an IAF MiG-21 Bison. The F-16 crashed and fell across the LOC in POJ&K.

The IAF lost one MiG-21 in the aerial engagement and though the Pilot ejected safely his parachute drifted into POJ&K where he was taken into custody by Pakistan Army.

a) The First blatant disinformation was that two IAF aircraft were shot down by Pakistan and three pilots were downed. This figure was later revised downwards to two IAF aircraft and two Pilots. The fact however, is that Indian Army units had reported sighting two parachutes falling in the POJ&K which were of two F-16 pilots shot down by the IAF MiG-21 Bison. Pakistan later in the evening changed its statement to say that one Indian pilot was in their custody. Therefore, it was only by late evening that Pakistan accepted the fact.

b) Secondly, Pakistan claimed that they intentionally dropped weapons in open space where there was no human presence or military posts. The fact is that the PAF aircraft targeted military installations. However they were intercepted by IAF fighter aircraft that thwarted their plans.  Although PAF bombs have fallen in Indian Army Formation compounds however they were unable to cause any significant damage to our Military Installations due to swift IAF response.

c) Pakistan also stated that no F-16s were used in the operation and no Pakistani Plane was downed by Indian Air Force. There is enough evidence to show that F-16s were used in this mission and Pakistan is trying to hide this fact. Also, parts of AMRAAM Air to Air Missile which is carried only on the F-16s in PAF were recovered East of Rajauri within the Indian territory. Therefore, the fact remains that one F-16 of PAF was shot down by an IAF MiG-21 Bison aircraft.

In response to the counter terrorist strike by the Indian Air Force, Pakistan Army first resorted to unprovoked ceasefire violations in Sundarbani, Bhimbar Gali, Naushera and Krishna Ghati Sectors on 26 Feb 19 with effect from 5 ‘O’ Clock in the evening and again during the night. This was responded to by the Indian Army in a befitting and appropriate manner.

As my Air Force counterpart has elaborated, on 27 Feb 19, Pakistan Air Force attempted to target military establishments in J&K. Specifically, they targeted a Bde [Brigade] HQ, a Bn [Battalion] HQ, forward defences and a Lgs [Logistics] Installation. However, given the high level of preparedness along the Line of Control and the immediate and punitive response by own forces. The Pakistan Air Force’s designs were foiled.

We continue to maintain strict vigil along the Line of Control and the IB [International Border] Sector. Our Ground Based Air Defence Weapon Systems have been put on alert on all along the Line of Control and some parts of the IB. Mechanised Formations too have been placed on Standby. I wish to assure the nation that we are fully prepared and in a heightened state of readiness to respond to any provocation by Pakistan.

Despite the present turn of events, the Indian Army is committed to maintaining peace and stability in the region and will continue to act against agencies who harbour inimical designs against India and citizens of our country.

The Indian Navy is deployed in high state of readiness and remains poised in all the three dimensions – on surface, under-sea and in air to deter, prevent and defeat any misadventure by Pakistan in the maritime domain. I can assure of a resolute, swift and strong response when needed. We stand as one with the Army and Air Force to ensure the safety and security of the nation and our citizens.