The first phase of the DDC election and panchayat bypolls will be held in Jammu and Kashmir on Saturday (November 28), with 1,427 candidates in the fray and seven lakh voters eligible to exercise their franchise. 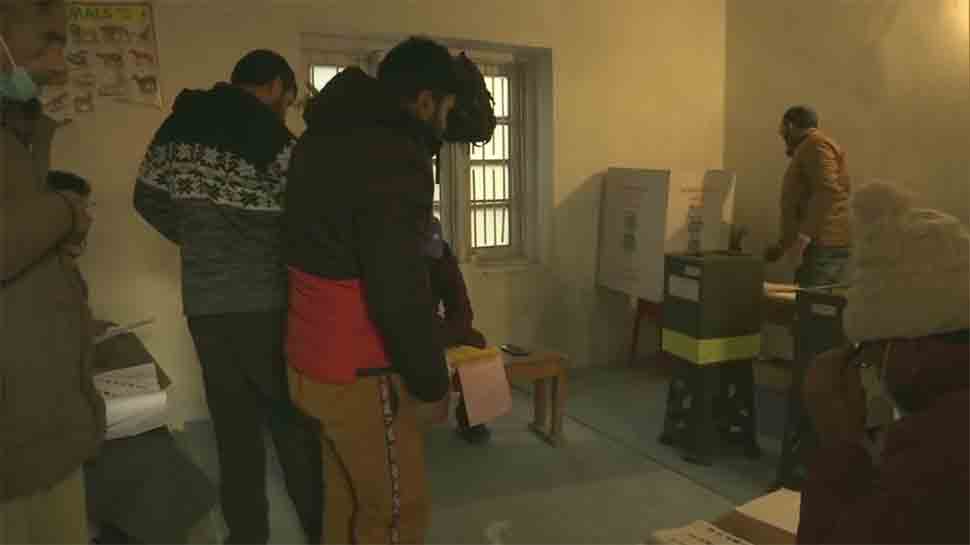 JAMMU: The first phase of the District Development Councils (DDC) election and panchayat bypolls in Jammu and Kashmir began on Saturday (November 28), with 1,427 candidates in the fray and seven lakh voters eligible to exercise their franchise. At least 40 out of 280 constituencies in the Union Territory are going to polls in the first phase of the DDC elections.

The DDC elections in Jammu and Kashmir, is the first major political activity to be held since the abrogation of Article 370 and bifurcation of the state into two union territories — Jammu and Ladakh.

Parties including the National Conference, People's Democratic Party, People Conference and CPI(M), formed the People's Alliance for Gupkar Declaration are fighting the maiden DDC elections together. National parties BJP and Congress are also in the fray.

Jammu and Kashmir: Voting underway for the first phase of District Development Council (DDC) elections in the Union Territory

Visuals from Shamasabad in Khansahib Tehsil of Budgam district pic.twitter.com/sh8MfYTzBK

Udhampur: Voting for the first phase of District Development Council (DDC) elections is underway in Jammu and Kashmir. Polling is underway in 43 constituencies - 25 in Kashmir and 18 in Jammu.

Polling underway in 43 constituencies - 25 in Kashmir and 18 in Jammu. pic.twitter.com/VNCTWQIO4P

State Election Commissioner KK Sharma told PTI that 2,146 polling stations have been set up for the smooth conduct of elections of phase-I. "As many as 7 lakh voters shall use their right to vote in phase I of polling tomorrow. Out of 7 lakh voters, more than 3.72 lakh are from the Kashmir division and 3.28 lakh are from the Jammu division," Sharma said.

On the District Development Council (DDC) elections, the SEC said a total of 280 constituencies are in the Union Territory of J&K (14 in each district), out of which voting will be conducted in 43 constituencies from 7 am to 2 pm in phase-I.

He said 296 candidates are in the poll fray, comprising 207 males and 89 females for DDC elections in Phase- I.

Sharma said the sarpanch election will be conducted in 94 constituencies and a total of 279 candidates (203 males, 76 females) are contesting in the first phase.

Similarly, in panchs bypolls, which are going to be held in 368 constituencies, 852 candidates are in the electoral fray out of which 635 are male and 217 are female, he added.

Sharma said all arrangements have been completed besides manpower, election material and adequate deployment of security forces have been put in place.

On the Standard Operating Procedures (SOPs) related to the COVID-19 pandemic, the SEC urged the people to follow the guidelines issued by the Election Commission, besides using face masks and maintaining social distance during polling.

He also said sanitizers and face masks shall be provided to the voters, in case they forget to carry their own.

The SEC appealed to the people to come forward to participate in the biggest festival of democracy and urged them to cast their votes.

The DDC election and the panchayat bypolls are being held in eight phases from November 28 to December 19. The counting of votes will be taken on December 22.