A family of six including three girl children aged 14, 12 and 10 were killed as their house was swept away in the landslide in the Kottayam district. 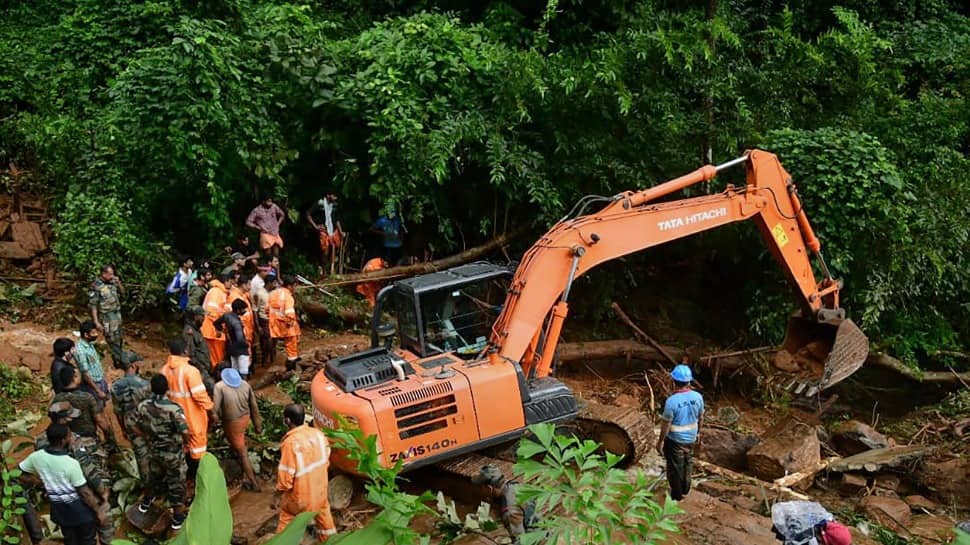 Rapid Action Force, Kerala Fire and Rescue personnel during rescue operations at the site of landslide at Kavali in Kottayam district (PTI photo)
Share:
Edited By:

Kottayam/Idukki: The death toll in incidents related to heavy rains, including landslides and flash floods in Kerala rose to 22 on Sunday while Prime Minister Narendra Modi offered assistance to the southern state to tackle the situation. Twenty two bodies, 13 from the Kottayam district and 9 from Idukki were recovered from various rain-hit areas while NDRF teams continued their rescue operations.

The casualties occurred on Saturday due to landslides and flash floods in the hilly areas of Kottayam and Idukki districts following heavy rains, officials said. In the high range Idukki district, where a travel ban is in place due to inclement weather, District Collector Sheeba George said two persons are still missing.

"Till now, we have recovered nine bodies. Two people are missing," she said.

"Spoke to Kerala CM Shri @vijayanpinarayi and discussed the situation in the wake of heavy rains and landslides in Kerala. Authorities are working on the ground to assist the injured and affected," Modi tweeted.

"I pray for everyone's safety and well-being," he said.

Spoke to Kerala CM Shri @vijayanpinarayi and discussed the situation in the wake of heavy rains and landslides in Kerala. Authorities are working on the ground to assist the injured and affected. I pray for everyone’s safety and well-being.

It is saddening that some people have lost their lives due to heavy rains and landslides in Kerala. Condolences to the bereaved families.

Union Home Minister Amit Shah said the Centre will provide all possible assistance to the people of Kerala, who have been affected by heavy rains and resulting floods.

He tweeted that the government was "continuously monitoring the situation in parts of Kerala in the wake of heavy rainfall and flooding."

We are continuously monitoring the situation in parts of Kerala in the wake of heavy rainfall and flooding. The central govt will provide all possible support to help people in need. NDRF teams have already been sent to assist the rescue operations. Praying for everyone’s safety.

State Revenue Minister K Rajan said an assistance of Rs 4 lakh will be given to the relatives of those who have lost their lives.

Officials said the bodies of three children buried under the slush were recovered in Idukki's Kokkayar after intense rescue efforts.

Children, aged eight, seven and four, were found holding each other. Kerala Leader of Opposition V D Satheesan, who visited Kokkayar and Koottickal alleged that the state government failed to launch rescue operations in time in the affected areas.

At Koottickal in Kottayam district, a family of six including three girl children aged 14, 12 and 10 were killed as their house was swept away in the landslide.

Bodies of three people were recovered Saturday and the remaining were found by the rescuers on Sunday.

Many hapless families in the high range hamlet were displaced and became inmates of rehabilitation camps. Several elderly villagers said it was for the first time in their lives they were experiencing such intense rainfall.

Meanwhile, a scientist at the Cochin University of Science and Technology (CUSAT) claimed that the brief, intense rain spells in some regions in Kerala indicated mini cloudbursts, a factor that also led to casualties, damage and loss of properties. Citing more than 5 cm rain received in two hours in worst affected areas of Idukki and Kottayam districts, S Abhilash of the Department of Atmospheric Sciences, CUSAT said it was a "mesoscale mini-cloudburst type of event".

Mini cloud bursts are marked by intense short spells which may not exceed 10cm in one hour - a classical definition by India Meteorological Department.

The Indian Navy said a helicopter from Naval Air Station, INS Garuda was launched in the morning to drop relief materials to the affected people.

The helicopter undertook aerial sorties to assess the status of the floods and landslides for authorities to plan any land-based search and rescue operations.

"At present, all Air assets, Rescue teams, and Team of Naval divers are kept on standby to assist civil administration at short notice", a Navy statement said.

Army said despite the harsh and inclement weather conditions, its personnel reached the affected areas within a few hours of requisition and have been employed in assistance to the civil administration in rescue and relief operations.

"Working since the late hours, the team was the first to reach the site at Kavali in Kottayam district and have been successful in recovering three bodies from the debris. The recovery operation became further difficult as the team had to clear the entire landslide only after the road was cleared for movement of the JCB", an Army release said.

During the process of recovery, the Army team had salvaged large quantities of gold and expensive accessories which were immediately handed over to the Civil administration for further accountability.

"The team is working in close coordination with the DC, Kottayam and the Tehsildar of Kanjirapally in the distribution of the much-needed relief material and in ensuring that normalcy returns in the area at the earliest", it said.

In its forecast, India Meteorological Department said Saturday's Low-pressure area over the southeast Arabian Sea and adjoining Kerala has become less Marked and now seen as a trough from south Interior Karnataka to south Tamil Nadu at lower levels.

"Under its influence, isolated heavy rainfall is very likely over Kerala and Mahe on 17th October 2021 and significant reduction thereafter," it said.

The Kerala State Electricity Board (KSEB) informed that it has incurred an estimated loss of Rs 13.67 crore due to the downpour in the state.

"The most damage happened in Pathanamthitta, Pala and Thodupuzha circles. A total of 3,074 distribution transformers stopped functioning out of which 60 were totally destroyed. 339 hi-tension posts were destroyed, 1398 low-tension posts damaged and 4.18 lakh electricity connections got snapped," KSEB said in a release.

Culture Minister Saji Cheriyan said families residing in the low-lying areas of Chengannur and Kuttanad areas have been shifted to relief camps as water from Pamba and Achankovil rivers began rising due to heavy rains in the eastern part of the state.

The Central Water Commission has issued an orange alert for the Manimala, Kallada, Achankovil, Neyyar and Karamana rivers of the state.

The IMD has withdrawn the red alert and currently, there is a Yellow alert sounded for the south-central districts of the state.

"NDRF teams have been deployed to Pathanamthitta, Alappuzha, Idukki, Ernakulam, Thrissur and Malappuram districts. Directions have been issued to deploy five additional teams to Idukki, Kottayam, Kollam, Kannur and Palakkad districts," he said.