Farmers who have been protesting at Delhi borders were permitted to hold a demonstration with limited numbers at Jantar Mantar in the national capital from 11 am upto 5 pm daily beginning Thursday. Delhi Police has put in place extensive arrangements to ensure that the protest programme remains peaceful. 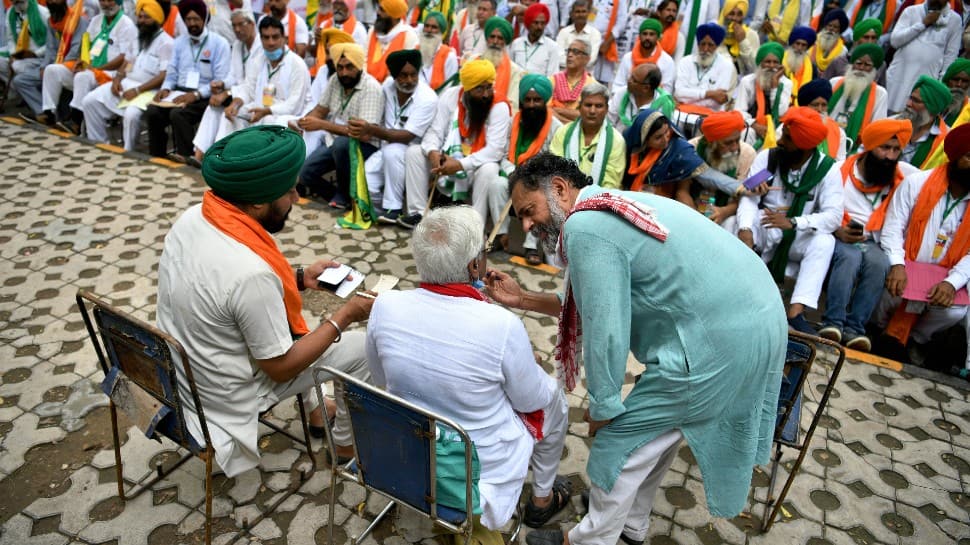 New Delhi: Farmers who have been protesting at Delhi borders held a demonstration with limited numbers at Jantar Mantar from 11 am upto 5 pm daily beginning Thursday. Delhi Police has put in place extensive arrangements to ensure that the protest programme remains peaceful.

The farmers' unions had announced that they will hold a 'Kisan Parliament' at Jantar Mantar during the Monsoon Session from July 22.

On Wednesday, the farmers were granted permission to stage a protest at Jantar Mantar, however, they are not allowed to go near the Parliament.

The police said they are not taking any chances after the January 26 Red Fort violence and have made suitable arrangements. Check posts and police barricades have been put up in multiple places.

Stay with Zee News for LIVE uodates on Farmers' Protest at Jantar Mantar:

Lok Sabha has passed the Insolvency and Bankruptcy Code (A) Bill, 2021. House adjourned till 3pm.

Protesting farmer leaders said that they intend to continue with the `Kisan Sansad` at Jantar Mantar till August 13, the last day of the ongoing Monsoon Session of the Parliament.

I strongly condemn the attack on the journalist. Action should be taken against the attacker, no matter which organization, be it police or govt, the person belongs to. We'll ensure that action is taken and such incidents don't happen again: Farmer leader Shiv Kumar Kakka

Some people were making videos and verbally abusing media (in Delhi today). After a scuffle, a man hit me on my head with a light stand. He had ID of some sort that said Kisan Media. Not sure if he was a farmer but it appeared he was biased towards farmers: Journalist Narendra Gosain

Congress MPs staged a protest inside the Parliament complex in support of protesting farmers and demanded that three new agriculture laws of the Centre be withdrawn.

We suspect that farmer leaders are among those being snooped upon by government: Shiv Kumar Kakka

Hooligans are the ones who have nothing. It is wrong to make such remarks for farmers. We are farmers, not hooligans. Farmers are 'anndatas' of the land: Rakesh Tikait, BKU leader

They are not farmers, they are hooligans. These are criminal acts. What happened on January 26 was also shameful criminals activities. Opposition promoted such activities: Union Minister Meenakshi Lekhi on the alleged attack on a media person at 'Farmers' Parliament' today

Farmers' representatives aren't allowed to raise the issue in Parliament. Ministers claim to discuss with farmers but they are not willing to do so. Shiromani Akali Dal will continue to fight for farmers: Harsimrat Kaur Badal

Farmers are protesting at Delhi border for 8 months. Over 500 farmers have died. Yet the govt did not see their condition at borders. They say that the laws will not be repealed. What's the point in talks?: Harsimrat Kaur Badal, Shiromani Akali Dal

"Every farmer Union will send three protesters daily to Jantar Mantar making it a total of 200 protesters. Farmers will come daily from today till August 13. Just like the Parliament, the 'Kisan Sanad' too will reject the farmers bill, a Speaker and Deputy Speaker will also be appointed," said Hanan Mollah, farmer leader.

"The purpose of coming here at Jantar Mantar is to inform that the farmers are against the three agricultural laws," Yogendra Yadav told Zee News.

Farmers will run their own Parliament. Members of Parliament (MPs), irrespective of their parties, will be criticised in their constituencies if they don't raise voice for farmers in the House: Bharatiya Kisan Union leader Rakesh Tikait

A cameraman at Jantar Mantar was attacked by a farmer using the former's camera stand. As per the victim, the farmer was abusing the media and when the protester was confronted he attacked the mediaperson. The cameraman received injuries on his arm, he is undergoing treatment at Delhi's RML Hospital.

There are reports that media persons have been attacked by farmers during the ongoing protest, though an official comfirmation is awaited.

Country has witnessed that these farm laws are beneficial & are in favour of farmers. We have had discussions about these laws. If they express their issues with the laws point-wise, we can discuss it: Union Agriculture Minister Narendra Singh Tomar

"We have held 11th round of talks with the farmers' union, now they have to decide what path they choose to take," Narendra Singh Tomar tells Zee News.

Parliament is just 150 metres away from Jantar Mantar. We will hold our own Parliament sessions there. What do we have to do with hooliganism? Are we miscreants?: BKU Leader Rakesh Tikait on being asked about arrangements to tackle situations like January 26 violence at Red Fort. (ANI)

We have placed preventive arrangements to avoid the entry of any miscreant at the Tikri border. The arrangement has been put in place as they (farmers) haven't received permission to hold protest here: Parvinder Singh, DCP, Outer District. (ANI)

Farmers gather to board the buses at Singhu (Delhi-Haryana) border, ahead of protest against three farm laws at Jantar Mantar in Delhi pic.twitter.com/S4JFHt6lv4

Our next stop will be Uttar Pradesh, BJP's heartland. Our UP mission will begin on Sept 5. We'll totally isolate BJP. There is no alternative other than to repeal three farm laws. We are ready for talks: Prem Singh Bhangu (in Pic 1), Farmer leader at Singhu (Delhi-Haryana) border. (ANI)

Delhi: Heavy security deployment at Tikri Border in view of farmers' protest against at Jantar Mantar amid monsoon session of Parliament pic.twitter.com/j3U71Z5w1s

Security tightens at Jantar Mantar ahead of a farmers' protest against three farm laws amid monsoon session of Parliament.

BKU leader Rakesh Tikait said he along with eight others (protesting farmers) will leave for Singhu border, and then will go to Jantar Mantar. "We will hold 'Kisan Sansad' at Jantar Mantar. We will monitor Parliament proceedings," he said. (ANI)