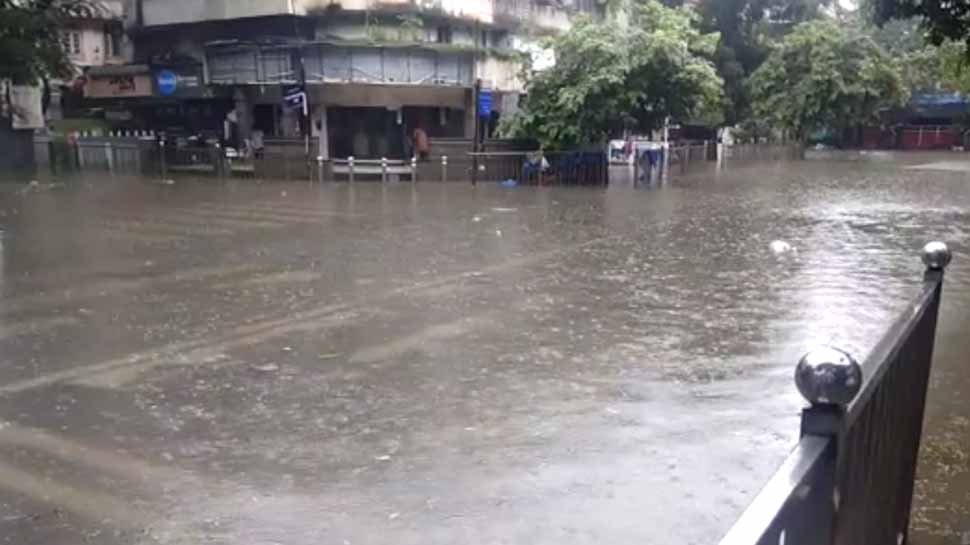 New Delhi: Mumbai has received the highest rainfall of the season within just 12 hours on Wednesday, the city civic body informed. According to the Brihanmumbai Municipal Corporation (BMC), the island city recorded 215.8 mm rain, followed by 101.9 mm in eastern suburbs and 76.03 mm in western suburbs. A high tide of 4.44 meters or 14.57 feet is likely to hit Mumbai today at 1.50 pm.

According to the Indian Council of Medical Research (ICMR), a cumulative total of 2,21,49,351 samples have been tested up to August 5 with 6,64,949 samples being tested on Wednesday.

With 1,034 new coronavirus cases recorded in the last 24 hours, Gujarat's tally crossed the 67,000-mark on Thursday, while 27 more patients succumbed to the infection, the state Health Department said. The tally of 1,034 took the number of positive cases in the state to 67,811, said a release by the Health Department.

Karnataka on Thursday reported its biggest single-day spurt of 6,805 COVID-19 cases and 93 related fatalities, taking the infection count in the state to 1.58 lakh, the health department said.
The day also saw 5,602 patients getting discharged after recovery. Out of the fresh cases reported on Thursday, 2,544 were from Bengaluru urban alone.

As of August 6 evening, cumulatively 1,58,254 COVID-19 positive cases have been confirmed in the state, which includes 2,897 deaths and 80,281 discharges, the health department said in its bulletin. It said out of 75,068 active cases, 74,397 patients are in isolation at designated hospitals and are stable, while 671 are in ICU.

Maharashtra Chief Minister Uddhav Thackeray on Thursday took stock of the state administration's preparedness in the wake of the incessant heavy rains in Mumbai and other parts of the state, including Kolhapur where the Panchganga river was flowing close to the danger mark. A statement issued by the Chief Minister's Office (CMO) said Thackeray asked the authorities to remain alert and ensure citizens do not face hardships. He spoke to the authorities concerned and officials of the India Meteorological Department (IMD), it said.

Heavy rains in Mumbai cause waterlogging in several parts of the city.

Mumbai, Thane and parts of Navi Mumbai received extremely heavyy falls (more than 200mm) at few places in the last 24 hours. Rest of the places it was heavy to very heavy. Colaba records 331.8 mm; Santacruz 162.3 mm. The next 24 hours could see gradual decrease in intensity of rainfall in the city.

BMC Commissioner Iqbal Chahal said that Mumbai has received 300 mm of rain within 4 hours on Wednesday evening, which was not anticipated. Chahal claimed that BMC had managed to draw out water from most places and that things had become normal by 10 pm on Wednesday.

At 8 am on Thursday, Thane recorded 164.29 mm of rain since the last 24 hours, water from Upvan Talaha and Pali Talao area overflowed to the roads.

A pipeline bursts has been reported from Mumbai due to a road collapse at Patkar road near Peddar road. The pipeline supplies water to Alta Mount Road, Taddev, Forget Hills, Forget Street, August Kranti areas burst.

As many as 34 roads including 9 state highways have been closed for traffic movement due to flooding in Kolhapur. Rajaram dam currently flowing above danger level: District Administration (ANI)

Ninety per cent of a sample group of coronavirus-recovered patients from a prominent hospital in China's Wuhan city where the pandemic broke out have reported lung damage and five per cent of them are again in quarantine after testing positive for the virus, according to a media report on Wednesday. Read more here

A cumulative total of 2,21,49,351 samples have been tested up to August 5 with 6,64,949 samples being tested on Wednesday, says Indian Council of Medical Research (ICMR).

RBI Monetary Policy to be announced today, may maintain status quo on lending rates. The six-member Monetary Policy Committee (MPC), headed by the RBI Governor, is scheduled to announce its decision on August 6. This is the 24th meeting of the MPC. Read more here

In view of evolving situation due to incessant rains, NDRF has prepositioned a total 16 teams in Maharashtra:

In Mumbai, a total of 112 trees fell including 29 in suburbs, as many as 6 houses collapsed and 10 incidents of short circuit were reported and some power cuts.

The wind speeds in South Mumbai averaged 70-80kmph, occasionally hitting 106kmph. Their intensity could be gauged from the fact that the normal wind speed ranges between 10-15 kmph in monsoon and the Nisarg Cyclone had hit Alibaug with the windspeed of 106kmph.

Meteorological Department’s Colaba centre recorded 293.8 mm of rain in 12 hours — incidentally, it is the highest rain received in a period of 24 hours for August since 1974.

Mumbai rain update: Radar image indicating intense clouds over north of Palghar district. In Mumbai and Thane not much clouds.

Radar image indicating intense clouds over N of Palghar. Mumbai, Thane not much clouds.
Night rains reduction observed, but Colaba is setting up another rerord for Aug RF.
Today could see reduction in day's RF. pic.twitter.com/3JZ47hPF3j

A high tide of 4.44 meter or 14.57 feet is likely to hit Mumbai at 1.50 pm today. Mumbaikars may face trouble if it rains during the high tide. Presently, there is dense cloud build up in Mumbai.

Lt Governor of Jammu and Kashmir Girish Chandra Murmu resigns, as per sources he may take charge as the new Comptroller and Auditor General (CAG) of India. Read more here