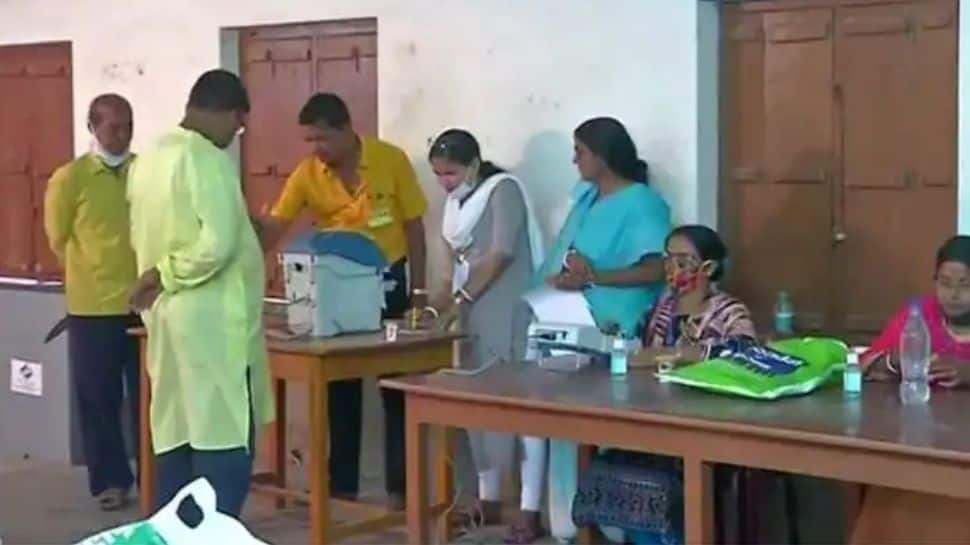 New Delhi: Six districts in the state of West Bengal will go to polls on Saturday (April 17).This will be the fifth phase of the Assembly elections and votes will be cast for 45 seats in the North and South of the state.

Over one crore voters in West Bengal will decide the political fate of 342 candidates on Saturday, when 45 assembly constituencies go to polls in the fifth phase, amid a raging second wave of COVID-19.

Security measures have been heightened for phase five in view of the violence in the previous phase, which witnessed the death of five people in Cooch Behar, including four in CISF firing.

The phase is crucial for the ruling Trinamool Congress, which is hoping to better its 2016 tally of 32 seats, even as a resurgent BJP looks to make inroads.

Elections have been held in 135 constituencies so far, and the remaining 159 seats are set to go to polls between April 17 and 29.

Thanks for staying tuned with Zee news

76. 77% voter turnout was recorded at 5.23 PM during the fifth phase of West Bengal Assembly polls, as per Election Commission website.

62.40% voter turnout was recorded till 3:15 pm during the fifth phase of the West Bengal Assembly elections, as per ANI. The voting will continue till 6 pm.

TMC MP Mimi Chakraborty on Saturday (April 17) cast her vote at a polling booth in Jalpaiguri, in the fifth phase of West Bengal Assembly election.

West Bengal: TMC MP Mimi Chakraborty casts her vote at a polling booth in Jalpaiguri, in the fifth phase of the State's Assembly election pic.twitter.com/0YoRFyH4Fj

West Bengal elections: 54.67 per cent voter turnout recorded till 1 pm in 45 seats where polling is underway for fifth phase.

West Bengal elections: 54.67 per cent voter turnout recorded till 1 pm in 45 seats where polling is underway for fifth phase.

TMC alleged that a polling booth in the Bardhaman Uttar constituency was captured by the BJP. The allegation was denied by the opposition party, while poll officials said that no such incident has happened.

In Siliguri, a scuffle broke out between TMC and CPI (M) supporters outside a polling booth.

In Santipur in the Nadia district, the Trinamool Congress alleged that personnel of the central forces were asking voters to go back, a charge rubbished by the authorities.

Bidhanagar violence during 5th phase polling: Trinamool MLA Sujit Bose and BJP candidate Sabyasachi Dutta visited the spot to take stock of the situation. A huge contingent of the central force was also rushed to the spot to control the situation

At least 8 people were injured in the violence in Bidhanagar in West Bengal during fifth phase of polling. Bricks and stones were hurled during the clash, officials told PTI.

Clash breaks out between Trinamool and BJP supporters in Shantinagar area of Bidhanagar with both sides accusing each other of stopping the voters from going to the polling booths.

As far as the authenticity of the tape is concerned, Derek O'Brien and Sukhendu Sekhar Roy confirmed it in a conversation with media. The only goal of the tape was to create further polarisation: Shishir Bajoria, BJP after meeting Election Commission in Kolkata.

Two of our people were injured in stone-pelting by BJP supporters at booth numbers 265 & 272. We have informed the election observer and police. The situation is normal now: TMC's Sujit Bose, Bidhan Nagar

Election Commission has sought a report over the sudden death of a BJP polling agent at booth number 107 in Kamarhati. West Bengal today "His name is Abhijeet Samant. Nobody helped him, there is no facility for treatment here," says brother of the deceased BJP polling agent

The fifth phase of the West Bengal assembly elections has seen a goood turnout.

I've full authority to enter a polling booth. They (Central forces) even searched my pocket in which I was carrying pictures of my goddess.This is a democratic country. I'm going to meet Chief Election Commissioner: TMC leader &candidate Madan Mitra,at booth no. 165/166 Kamarhati.

Defence Minister Rajnath Singh appealed to the people of WB asking them to step out to vote.

Fifth phase of the West Bengal polls takes place today. Requesting all eligible voters of this phase in the State to exercise their franchise.

TMC leader Madan Mitra casts his vote at a polling booth in Kamarhati.

"It looks like 'khela shesh' so far. We're keeping a watch. As far as the Hills & our problems are concerned, we want that this government be changed; we want BJP govt, we want justice": Gorkha National Liberation Front (GNLF) president Mann Ghising, in Darjeeling.

Voters queue up outside Hiralal Mazumder Memorial College for Women - designated as a polling booth - in Dakshineswar, Kolkata. Voting for the fifth phase of #WestBengalElections2021 is underway today. pic.twitter.com/h9uYFp9xC7

Siliguri gears up for a busy polling day.

Visuals from a polling booth in West Bengal's Siliguri, ahead of fifth phase polling in the state#WestBengalElections2021 pic.twitter.com/QmFB4KjhUB

The people of Kamarhati step out to cast their votes as the polling begins.

Voters queue up to cast their votes as 5th phase of polling begins; visuals from Kamarhati, West Bengal#WestBengalPolls pic.twitter.com/UO0ZrQWOCP

Polling begins for 45 seats in fifth phase of West Bengal Elections amid tight security, over one crore voters to decide fate of 342 candidates.