Will make all necessary arrangements for protesting farmers in Delhi, says AAP

Farmers from Punjab gathered with their tractor-trailers and are on their way towards the national capital in protest against the Centre's new farm laws. 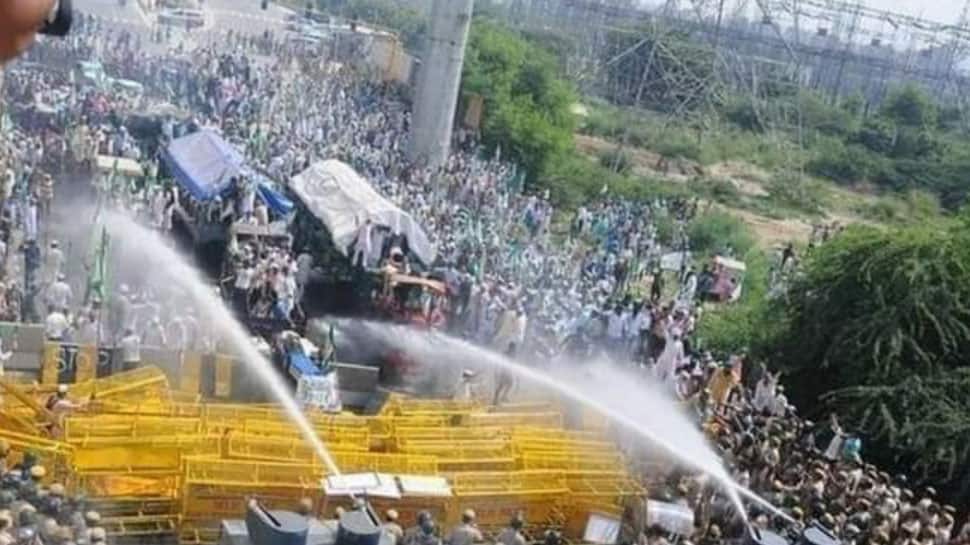 New Delhi: Thousands of protesting farmers assembled at various places along the Haryana-Punjab borders on Thursday morning for their `Dilli Chalo` protest. Farmers from Punjab amassed with their tractor-trailers and are headed for the national capital.

Meanwhile, Haryana has put up road barricades to seal its borders with Punjab for the next two days, to stop the farmers from their onwards march to Delhi.

Haryana police used water cannons on the protesting farmers to disperse and stop them from going to Delhi. Also, prohibitory orders under Section 144 of the CrPC wa imposed in several parts of the state to prevent assembly of protesters. The bus service to Punjab from Haryana for November 26 and 27 has been suspended, state Transport Minister Mool Chand Sharma told PTI.

Farmers from Punjab on the 'Delhi Chalo' movement, settle down at Singhu border (Delhi-Haryana), planning for further action. "We've got food rations for 6 months. We'll go back after getting rid of the black agriculture laws which are against farmers," says a protester.

Haryana: Farmers from Punjab on the 'Delhi Chalo' movement, settle down at Singhu border (Delhi-Haryana), planning for further action

"We've got food rations for 6 months. We'll go back after getting rid of the black agriculture laws which are against farmers," says a protester pic.twitter.com/dmesWlMdcH

Delhi Metro resumes normal operations on all lines; to operate normally on Saturday.

Union Minister Tomar urges farmers to withdraw protests, invites them for talks on December 3. "The government has always been ready to discuss issues with farmers. We have invited farmers' organizations for another round of talks on 3rd December. I appeal to them to leave agitation in view of Covid-19 and winter," says Tomar.

The government has always been ready to discuss issues with farmers. We have invited farmers' organizations for another round of talks on 3rd December. I appeal to them to leave agitation in view of COVID-19 and winter: Union Agriculture Minister Narendra Singh Tomar pic.twitter.com/GPfjOBPpIR

Led by Rakesh Tikait, protesting farmers reach Meerut toll plaza. The agitating farmers will stay here tomight and will proceed towards Delhi in the morning. No toll tax will be levied on vehicles passing through this toll plaza tonight.

The police has been removing the barricades put up earlier at the Singhu border. From 3 layers the barricading is down to one. Farmers will now move to the national capital to continue their protest.

Protesting farmers will be allowed to enter the national capital. They will have the permission to protest at the Nirankari Samagam Ground in the Burari area: Delhi Police Commissioner

In view of the farmers protest, security has been increased at Delhi's Jantar Mantar. Traffic is being diverted from all routes leading to Jantar Mantar. Water canon has been installed the area has been barricaded. Personnel of the Delhi Police and Rapid Action Force ahve been deployed.

Haryana Chief Minister Manohar Lal Khattar appealed to the protesting farmers to talk to the Centre and amicably solve the problems. He wrote on Twitter: "The central government is always ready for talks. I appeal to all the farmer brothers to directly talk to the Center for all their issues. Protests are not the right way - the solution will come off a conversation."

Police have made strict arrangements at the Faridabad border. DCP South-East RP Meena is at the scene taking stock of security. Apart from Delhi Police BSF personnel have been deployed too. Police is using drone cameras to monitor the protesters, cement barricades, crane, tear gas shells, and water canons are on site.

Janata Dal (United) leader KC Tyagi said that the Union Agriculture Minister Narednra Singh Tomar should not wait till December 3 to hold talks wiht the farmers. They should immediately resolve the issues. Further, he said that paying less than MSP should be made a punishable offense.

Delhi Police enhanced deployment of security personnel, stationed sand-laden trucks and water cannons and used barbed wire for fencing at the Singhu Border to prevent the protesters from entering the city. Police said they would not allow farmers protesting against the Centre's new farm laws to enter Delhi if they reach the borders.

Heavy police deployment in Uttar Pradesh's Baghpat to stop protesting farmers. The border has been barricaded as BKU announced that will join the agitating farmers to march towards Delhi.

Security has been intensified on the Delhi-Noida border in view of the farmers protest. Delhi Police and Rapid Action Force have been deployed on the border. Although there is no news of any movement on this side, but security arrangements have been made as a precaution.

Police tried to hold talks with the agitating farmers but there was no concensus, after which the police resorted to lobbing tear gas shells to disperse the protestors.

Delhi Police asks Delhi government's permission to use nine stadiums as temporary jails for the protesting farmers who are expected to be arrested as they enter the city.

Thousands of protesting farmers assembled at various places along the Haryana-Punjab borders on Thursday morning for their `Dilli Chalo` protest.

Shiromani Akali Dal General Secretary and spokesman Prem Singh Chandumajra said, "If the government had called the farmers for talks a few days ago, this situation would not have arisen. Our demand is that the MSP should be made a fundamental right and all the three new farm laws be repealed."

Farmers from Punjab's Fatehgarh Sahib move towards Delhi to protest against the Centre's farm laws. (ANI)

Farmers from #Punjab's Fatehgarh Sahib move towards Delhi to protest against the farm laws passed by the Centre pic.twitter.com/jWkaK7RA5K

The Delhi Noida Direct (DND) Flyway has been barricaded and a cache of police team has been deployed in view of the farmers protest. 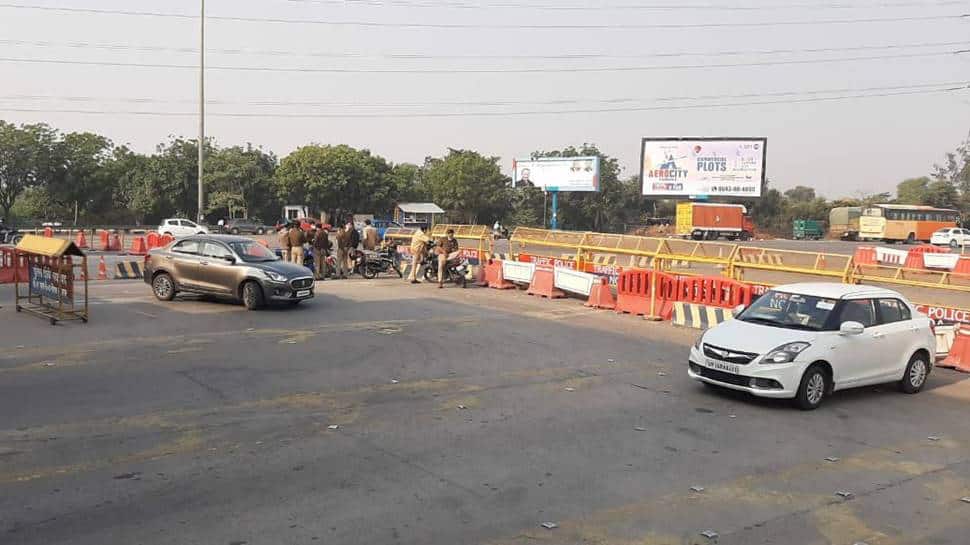 According to the Delhi Police, a large number of police force has been deployed on the Singhu border, about 500 - 600 protesters have reached a village in Karnal. 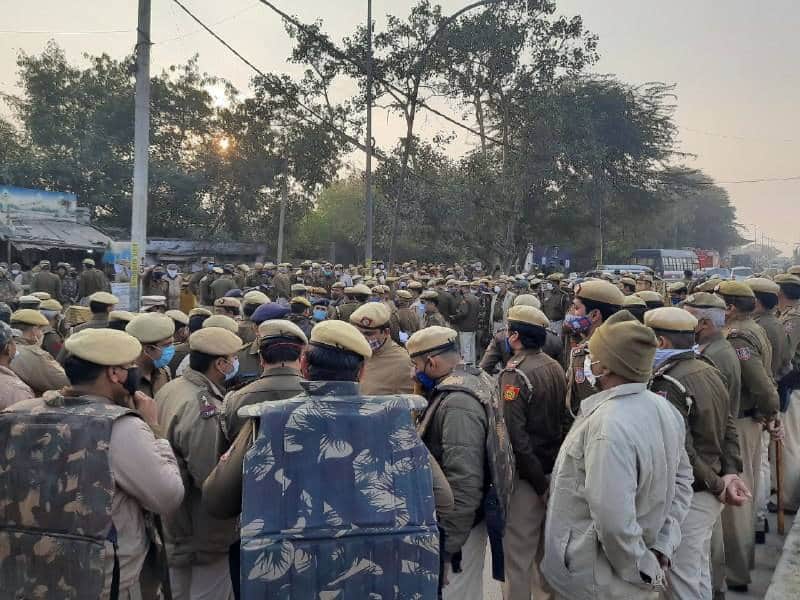 The Haryana Police put up multi-layered barricades and boulders on roads from Punjab, officials said. Police are keeping vigil over farmers with drones. A Punjab Police official on duty at Sangrur's Khanauri told reporters that the Haryana Police used cranes to put boulders on roads and the movement of traffic to the other side has been stopped. "We are diverting traffic to alternate routes now. We are also ensuring that the movement of essential goods is not affected," he said. (PTI)

In a statement, the Delhi Metro Rail Corporation said no metro services will be available from Anand Vihar to Vaishali and New Ashok Nagar to Noida City Centre on Thursday till 2 pm in view of the Kisan Rally in Delhi. Read more here

More than 500 farmer organizations have come together to take part in the demonstration. The protest mainly constitutes All India Kisan Sangharsh Comittee, Rashtriya Kisan Maha Sangharsh and Bhartiya Kisan Morcha.

Delhi Police deploys force everywhere, a large cache of police force is deployed on all Delhi borders. No large gathering of people to be allowed for farmer's demonstration.