While voting in fourth phase of Lok Sabha election 2019 has been largely free of hurdles so far - barring a few cases of EVM glitches, clashes have erupted in West Bengal between BJP and TMC workers. 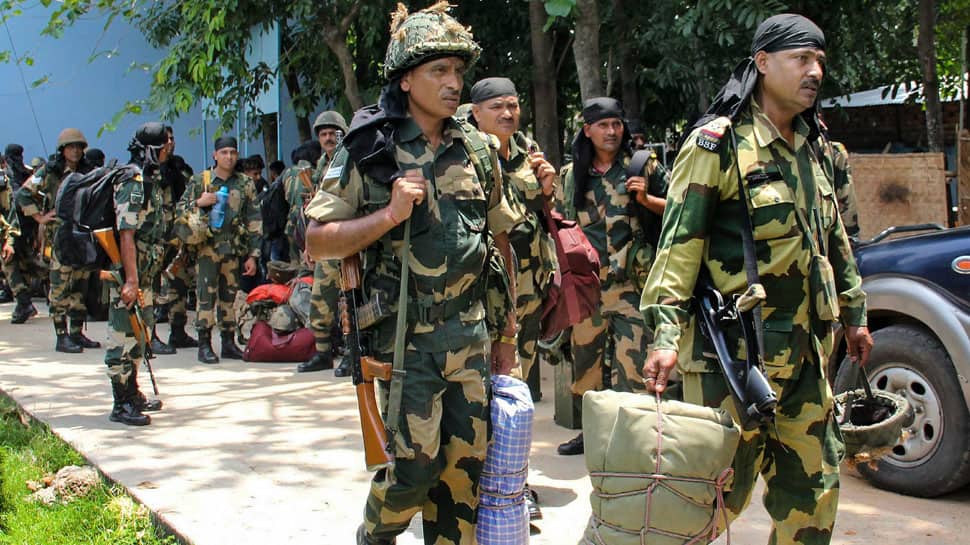 After weeks of hectic campaigning, 943 candidates had their fates decided on Monday (April 29) in the fourth phase of voting in the Lok Sabha election 2019.

Voting took place in 71 parliamentary constituencies in eight states and also in Jammu and Kashmir's Anantnag, where voting is happening in three phases due to security reasons. There are a total of 17 seats in Maharashtra, 13 in Rajasthan and Uttar Pradesh each, eight in West Bengal, six in Madhya Pradesh and Odisha each, five seats in Bihar and three in Jharkhand.

A total of 12 crore 79 lakh voters exercised their franchise with the Election Commission urging everyone to be part of the democratic process.

Leonard Lakda, a polling official who was on duty at a polling station in Sarango of Gumla, suddenly collapsed and started bleeding. After first aid, Anil Sharma, a CRPF constable took the polling staff on his shoulders and shifted him to nearby Health Centre and saved his life, reports ANI

61.97% votes were polled in the fourth phase of Lok Sabha elections 2019 till 7 PM, according to official data on Election Commission’s Voter Turnout App.

The total number of first-time voters in the seven phases of 2019 Lok Sabha election is 1.91 crore, which is 20% more than that what was recorded in 2014, said EC while addressing a press conference after the fourth phase of polling.

Polling agent dies at an election booth in Rajasthan's Udaipur after he complains of chest pain.

Reliance Industries chairman Mukesh Ambani and his family cast their votes at a polling booth at Villa Theresa High School on Peddar Road in Mumbai.

Estimated voter turnout till 5 PM for the 4th phase is 50.6%. Voting is currently underway in 72 constituencies, across 9 states.

Estimated voter turnout till 5 pm for the 4th phase of #LokSabhaElections2019 is 50.6%. Voting is underway in 72 constituencies, across 9 states. pic.twitter.com/l1ckiEM6fa

According to ANI, the Election Commission has directed the police to register an FIR against Babul Supriyo, Union Minister and BJP candidate from Asansol Lok Sabha seat, for allegedly trespassing into booth number 199 and threatening a polling agent and an officer.

EC registers FIR against Union Minister and BJP candidate from Asansol, Babul Supriyo. A video came to light when Supriyo had entered a 199 booth in Bonabani and threatened the TMC polling agent. The presiding officer confirmed to EC of intimidation by Supriyo.

Bollywood superstar Shah Rukh Khan and his wife Gauri Khan leave after casting their votes at a polling booth in Bandra, Mumbai.

Mumbai: Shah Rukh Khan and his wife Gauri Khan leave after casting their votes at a polling booth in Bandra. #LokSabhaElections2019 pic.twitter.com/h85W4vzCxL

TMC's Derek O'Brien reacts to PM Modi's "40 TMC MLAs in contact with me" remarks, says, ''Expiry Babu PM. Nobody will go with you, not even one councillor. Are you election campaigning or horsetrading, your expiry date is near. Today, we are complaining to EC. Charging you with horsetrading.'' 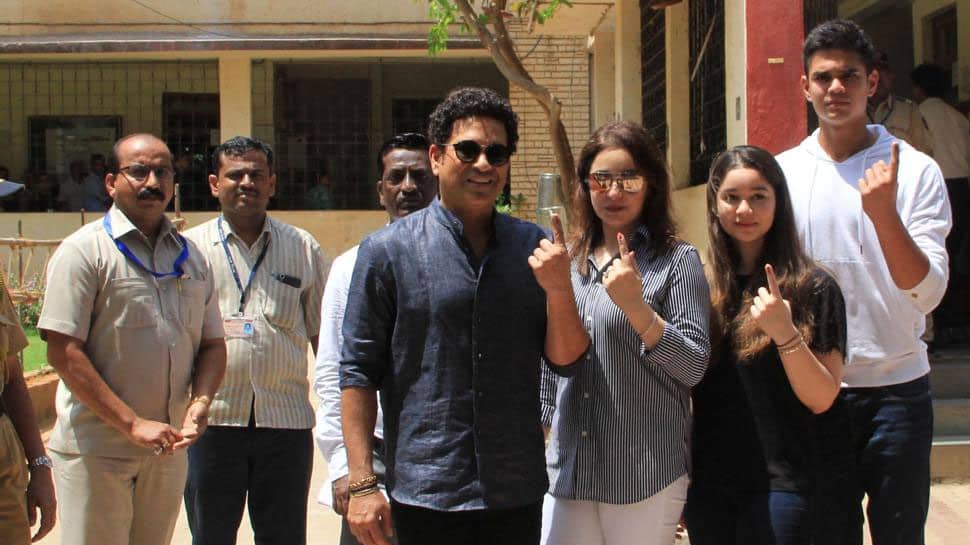 Voting ends in Jharkhand's Chatra, Lohardaga and Palamu. Polling was held here between 7 AM to 4 PM.

The overall voting percentage in Jharkhand recorded at 56.37%.

Here are some more visuals of polling which is underway at polling booth number 63 in Bumthan, Qazigund in J&K.

The pace of polling has fallen in many states as the afternoon wears on. This is especially in the states of Rajasthan and Madhya Pradesh where temperatures soar post noon and stay high till dusk.

Naresh Goyal, former chairman of Jet Airways, casts his vote. He refused to take any questions on the cash-ridden airlines which has stopped all operations. 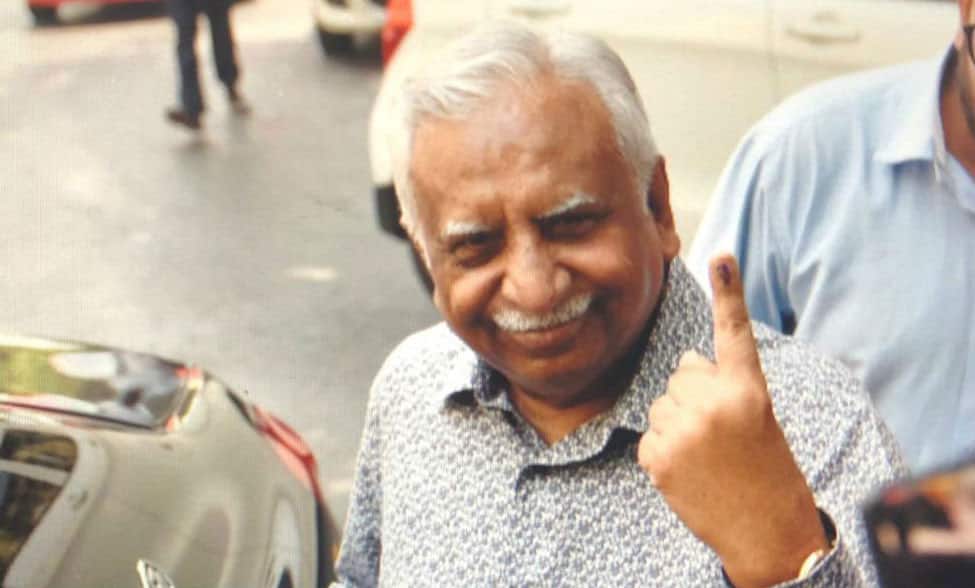 It is reported that locals appealed to cops for help but no action was taken. The bombs may have been hurdled for booth-capturing purposes. Locals also accuse cops of helping the culprits - who had covered their faces - escape. 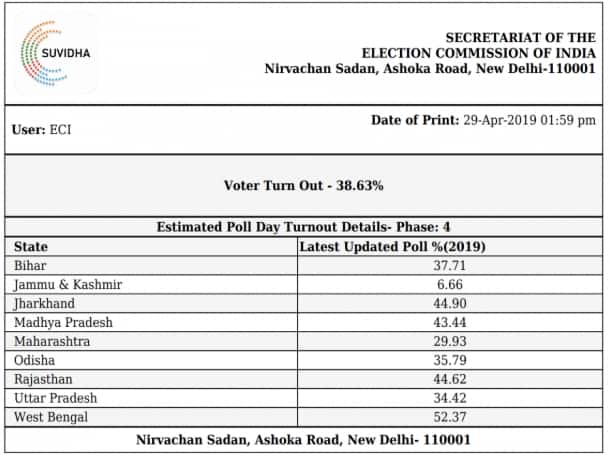 Bollywood actor flashes his inked finger after casting his vote: 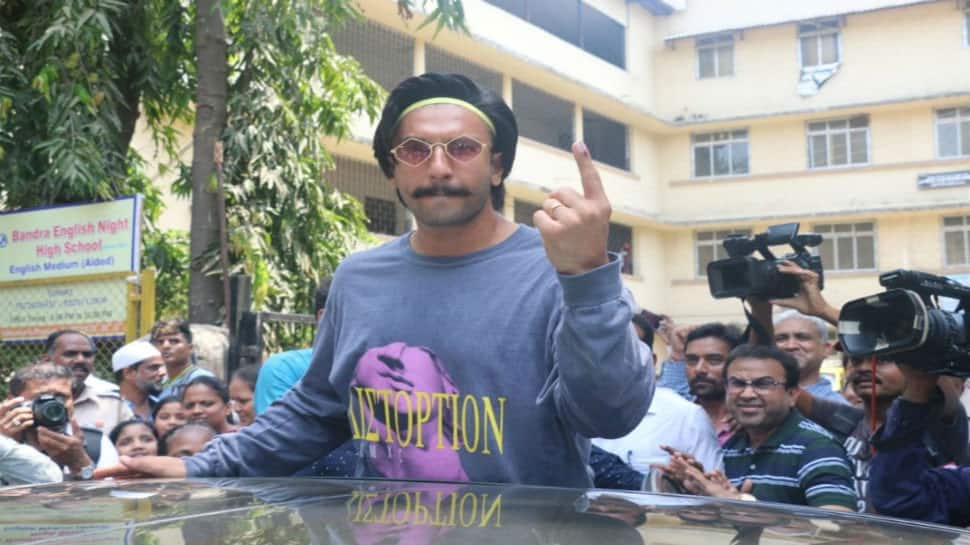 Scuffle at booth no. 82 of Rampurhat in Birbhum (West Bengal):

Man comes to vote on a horse in Sirohi district's Aamthala in Rajasthan: 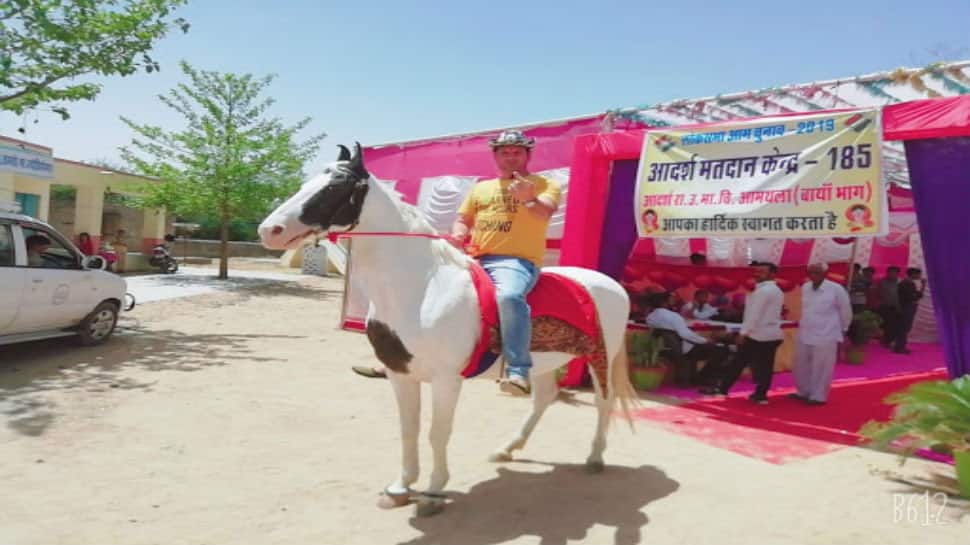 The delegation reportedly accused state machinery in the state of forcing people to vote in favour of certain political parties. 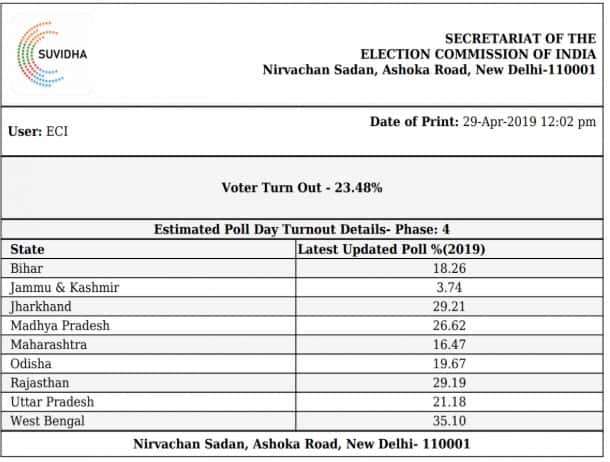 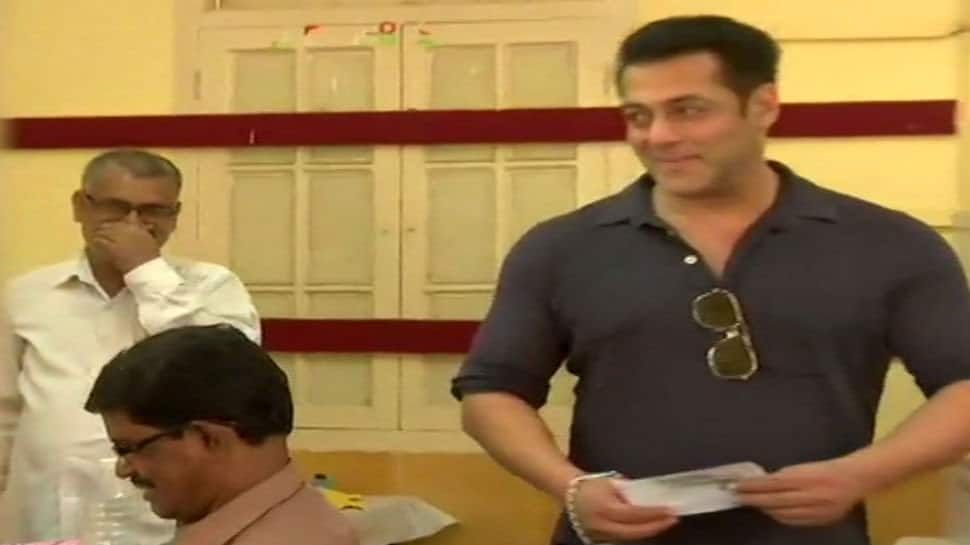 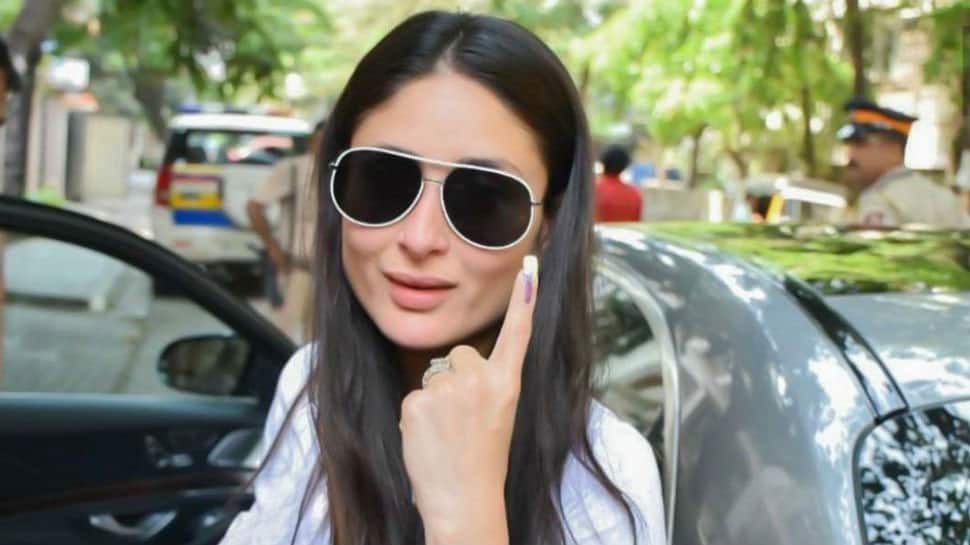 Congress' Priya Duty with husband Owen Roncon after they cast their vote in Mumbai. (PTI Photo) 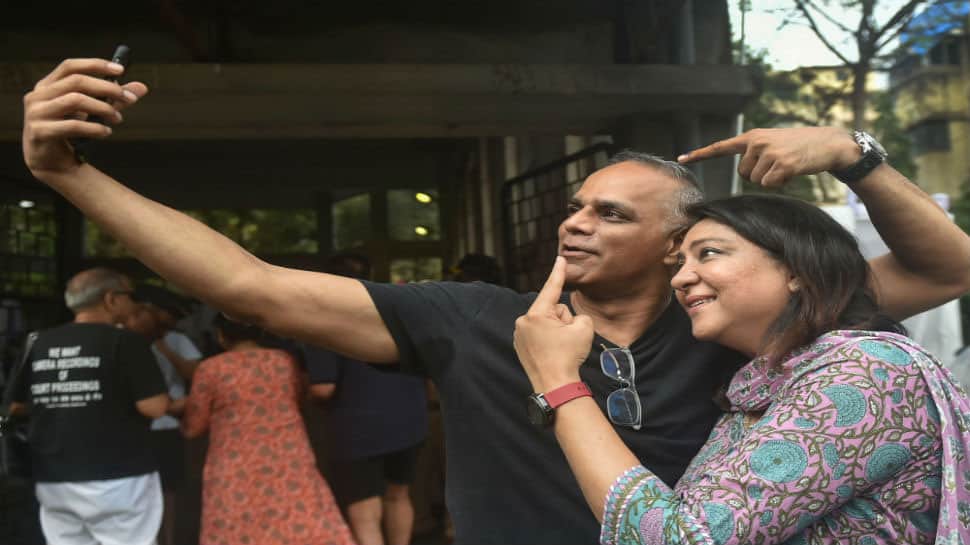 Zee News' Pooja Mehta reports on the attack on media by locals in Asansol earlier today:

107-year-old Deepa Gurjar joins family members in casting her vote in Rajasthan's Hajjam Kheri village in a booth six kilometers from her home: 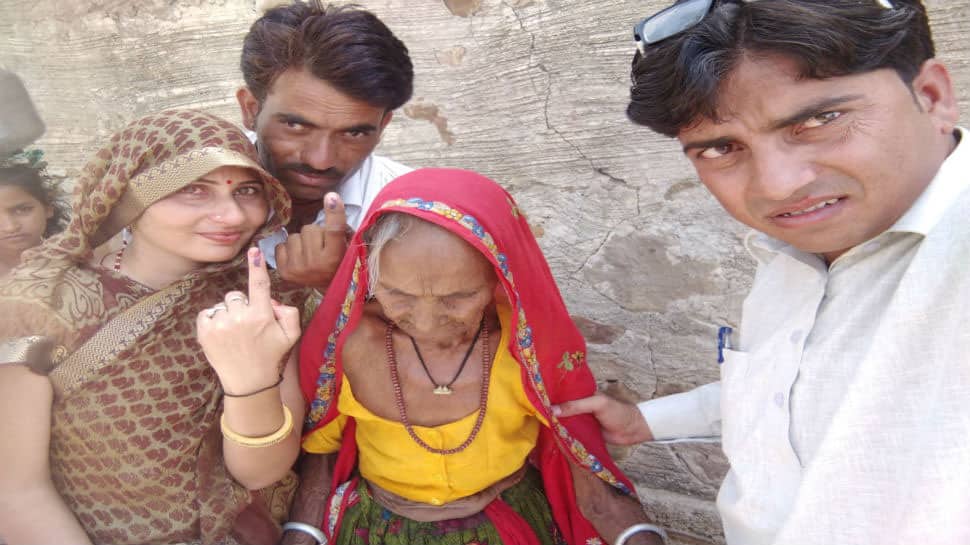 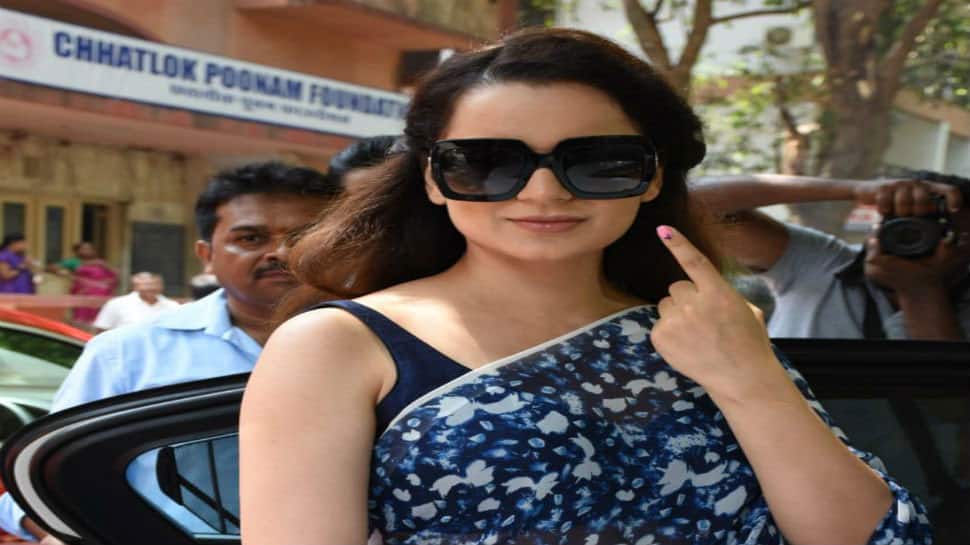 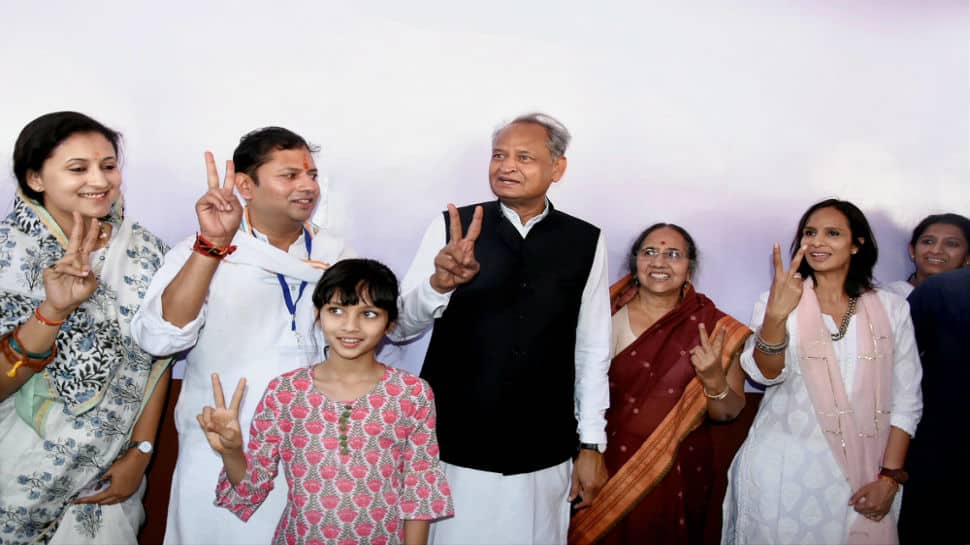 TMC files a written complaint against Babul Supriyo and alleges that the BJP MP from Asansol misbehaved with TMC polling agent in Jemua. 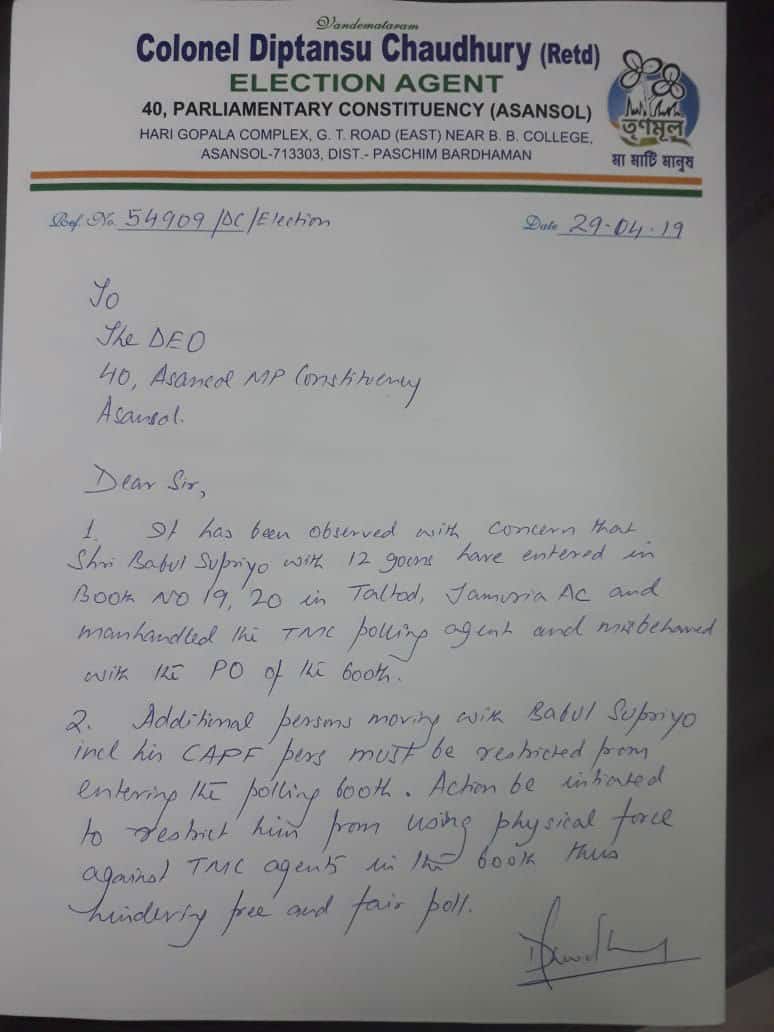 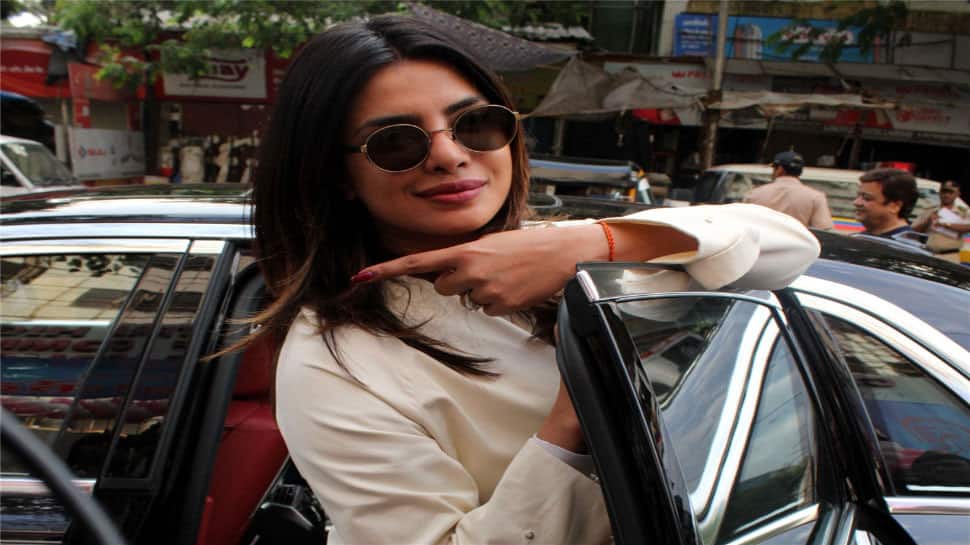 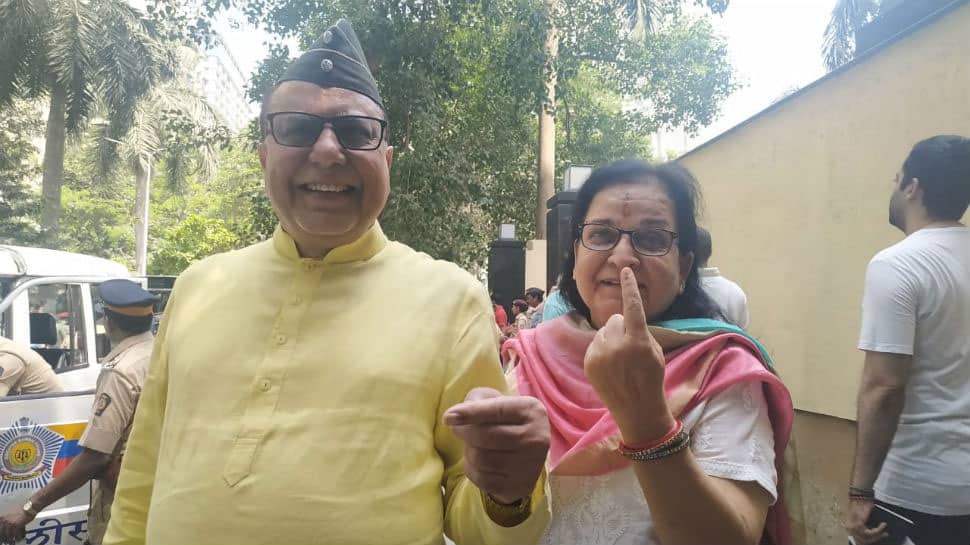 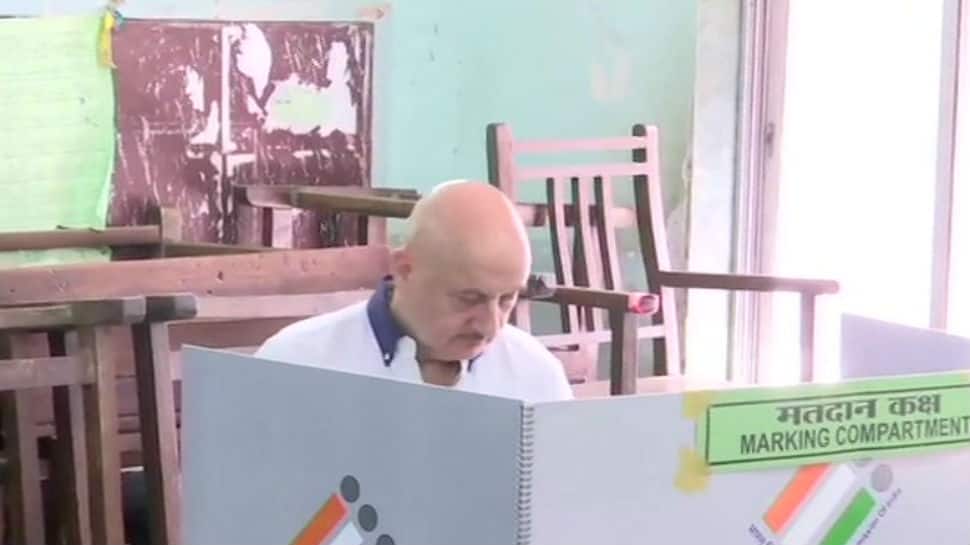 "I urge everyone to come out to vote. It is absolutely necessary, each vote counts," she says. 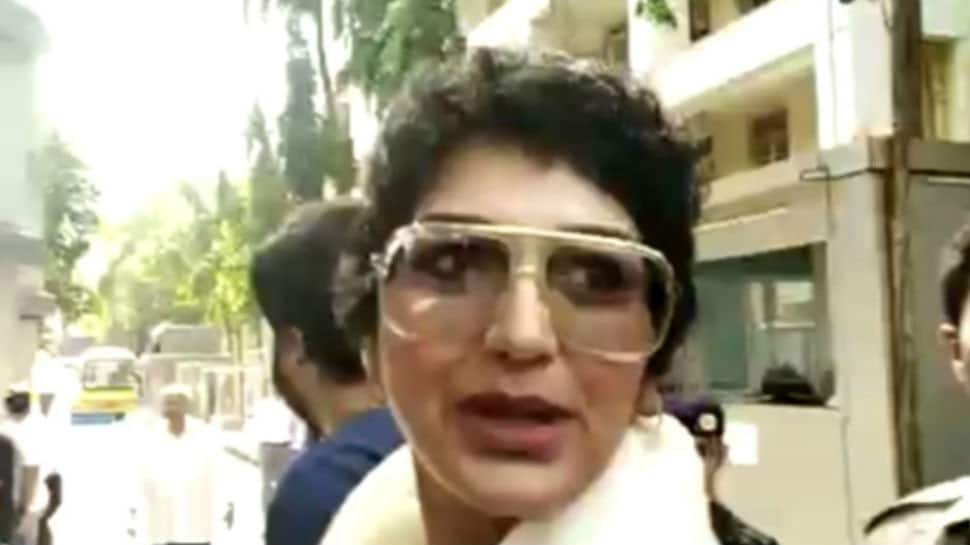 "The people of West Bengal are showing tremendous courage in coming out to vote despite the state government's efforts to create an atmosphere of fear and panic. The state government there has completely failed. I won't be surprised if BJP wins more than 30 seats here."

BJP MP Babul Supriyo alleges that TMC workers have been trying to influence voters in Asansol.

"There is enough proof that voters here were either being influenced to vote in a particular way or being forced to. TMC workers have also been stopping some people from voting when they refused to be directed," he says. "This is happening all over West Bengal but mostly in Asansol. Here, polling agents have not been allowed to leave their homes." 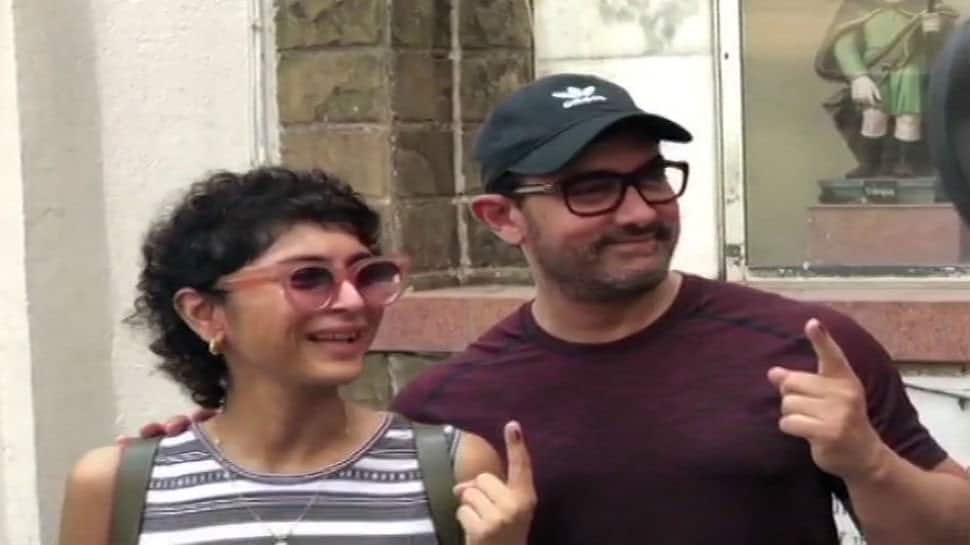 Zee 24 Ghanta reports that the Election Commission has asked for a report on the clashes between TMC and BJP workers in West Bengal's Jemua earlier today. The situation here is still extremely tense even as violence has erupted in Asansol.

Overall estimated voter turnout till 9am is 10.25%. 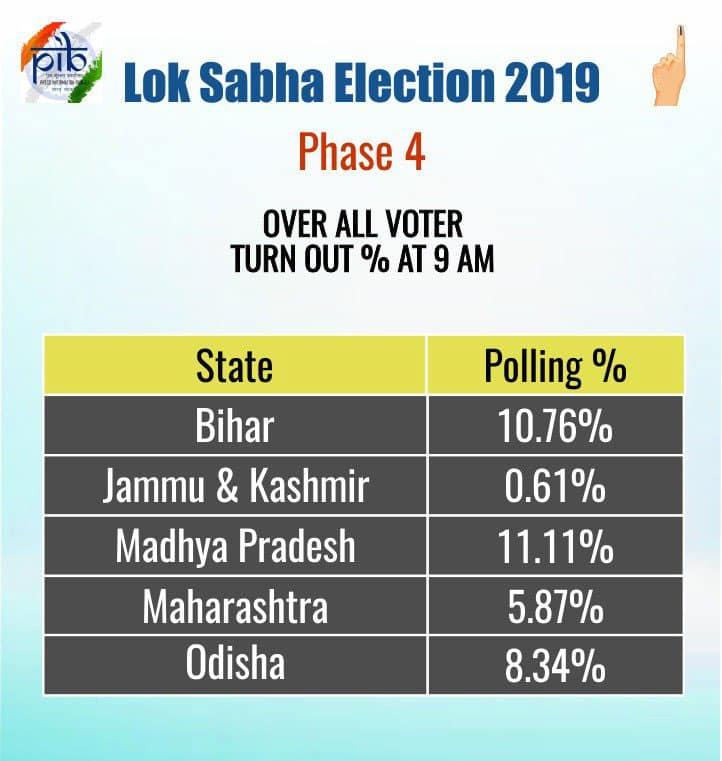 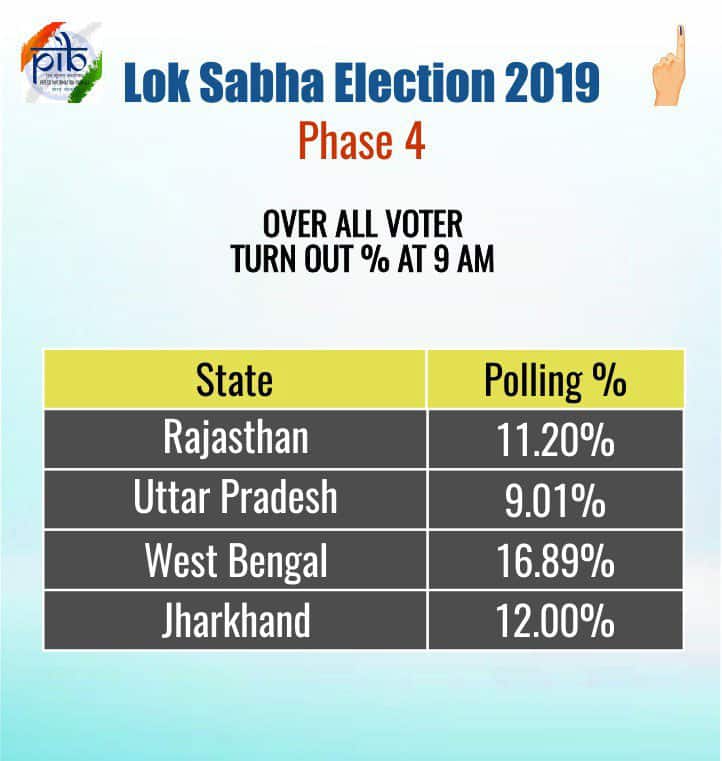