Union Home Minister Amit Shah on Friday moved a statutory resolution in the Lok Sabha to extend President's Rule in Jammu and Kashmir for a period of six months. It is essential that the President's Rule be extended for another six months with effect from July 3, 2019, said Shah. 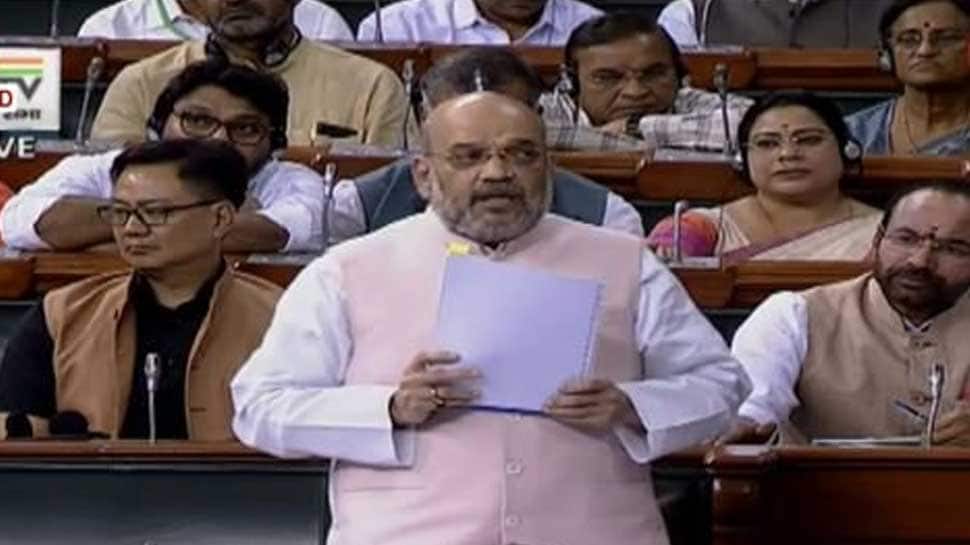 NEW DELHI: Union Home Minister Amit Shah Friday moved a statutory resolution in the Lok Sabha to extend President's Rule in Jammu and Kashmir for a period of six months. It is essential that the President's Rule be extended for another six months with effect from July 3, 2019, said Shah.

There was a time when there was no sign of India in Kashmir. State Bank of India signboard was seen with a cloth covering 'India' word. Murli Manohar Joshi and Narendra Modi risked their lives and unfurled 'triclour' at Lal Chowk. We were not in power then: Shah

Some say there is an atmosphere of fear there. Those who are against India should have fear in their hearts. We are not part of ''tukde tukde'' gang. We are not against common people of J&K, we have started the process of providing them jobs and implementing all govt schemes there: Amit Shah.

Be it panchayat or Lok Sabha polls, not a drop of blood was shed in J&K, we are in full control: Shah.

We want to remove fear from the minds of J&K residents, says Shah.

In 1953 when Dr SP Mukherjee entered Kashmir protesting against the two Prime Ministers in a country rule he was thrown in jail. His death was also not probed. Why? Was he not a senior opposition leader? A leader from Bengal, a former Union Minister: Shah

Govt should probe the death of Dr Shayama Prasad Mukherji because he was an opposition leader, hailed from Bengal and fought for the nation, demands Amit Shah.

We are facing the scourge of terror because of the mistakes that were made by Congress: Shah

It's because of PM Modi and Rajnath Singh that pro-Pakistan channels are banned now, says Amit Shah in Lok Sabha.

Things have changed in J&K now, terrorism is in its last stage here, says Shah

We are monitoring the situation in Jammu & Kashmir. Construction of bunkers in border areas will be done within the time limit set by the previous home minister Rajnath Singh Ji. Life of every individual is important to us: Shah

Who called for ceasefire back then? It was Jawaharlal Nehru who did it and gave that portion (PoK) to Pakistan. You say we don't take people into confidence, but Nehru ji did it without taking the then Home Minister into confidence. So Manish (Tewari) ji don't teach us history: Shah.

Shah attacks Congress, says Jawahar Lal Nehru ignored Sardar Patel and created Kashmir problem which resulted in the killing of thousands of people since then.

They are saying we are trampling democracy in J&K. Before this time, till now 132 times, article 356 has been imposed (President's Rule), out of which 93 times Congress has done it. Now these people will teach us democracy? Shah

It is not possible to hold elections in Jammu and Kashmir now. The Election Commission has decided to conduct the elections by the year-end. For the past several decades, the elections have not taken place in the state during these months: Shah

Manish Tiwari told the house said that the war should be fought above ideology. Our ideology is in the interest of Bharat Mata: Amit Shah

They are saying we are trampling democracy in J&K.  Before this time, till now 132 times, article 356 has been imposed(President's rule), out of which 93 times Congress has done it. Now these ppl will teach us democracy?

Pro-Pakistan groups were given protection for vote-bank politics: Amit Shah in Lok Sabha

Jammu and Kashmir is an integral part of India. We were the ones who banned the JKLF: Amit Shah in LS

I want to assure all the Members and the people of the country through this House that the Narendra Modi Government is following zero-tolerance policy against terrorism: Amit Shah

Rajya Sabha: Samajwadi Party demanded compensation for people killed by stray cattle and insurance cover for crops damage caused by them. Raising the issue during Zero Hour, Ravi Prakash Verma (SP) said stray cattle has become a menace in Uttar Pradesh and other northern states because of lack of an appropriate policy. He said stray cattle was clogging highways, damaging standing crops and in many cases also killing/injuring people.

"Today situation is such that we have to extend President's rule in Jammu & Kashmir every 6 months, its roots are in the alliance of PDP & BJP in 2015. If you have a tough policy against terrorism, we don't oppose it, but there is a need to keep in mind that the fight against terrorism can only be won if people are with you," Congress' Manish Tewari in Lok Sabha.

In the second proposal, some new areas will be added by amending Section 5 and 9 of Jammu and Kashmir Constitution, which deal with the provision of reservation: Amit Shah

The state has seen bloodshed in previous elections, but things have changed. This time, there was an election for 40,000 posts, but not a single person lost his life. There was no violence in Parliamentary elections too. This shows that the law and order in Jammu and Kashmir is better: Amit Shah

In Jammu and Kashmir, Panchayat elections were not held for many years. But in the last one year, our Government conducted elections in more than 4000 panchayats and more than 40,000 Panch Sarpanchs are serving the people today: Amit Shah

In the past one year, this Government has done a lot of work to root out terrorism from Jammu and Kashmir: Amit Shah

The Election Commission has held talks with the Central Government and all political parties and decided that it would be possible to hold elections at the end of this year: Amit Shah

President's rule in Jammu and Kashmir will continue for six months from July 3, 2019: Amit Shah

Amit Shah moves resolution to extend President's rule in J&K: "This bill is not to please anyone but for those living near the International Border."

"We are monitoring the situation in Jammu & Kashmir. Construction of bunkers in border areas will be done within the time limit set by the previous home minister Rajnath Singh. Life of every individual is important to us," Amit Shah in Lok Sabha.

Home Minister Amit Shah sought a six-month extension of President's Rule in J&K and suggested that polls be held after Amarnath Yatra.

The government is trying to push for the passage of Jammu and Kashmir Reservation (Amendment) Bill, 2019 today itself. The legislation is likely to be taken up in the Rajya Sabha on July 1. The Bill, which amends the Jammu and Kashmir Reservation Act, 2004. was introduced in Lok Sabha on Monday. It paves the way for the people living near the International Border in Jammu and Kashmir to get the benefit of reservation in jobs, promotion and educational institutions on par with those living along the Actual Line of Control (ALoC).On June 12, the Union Cabinet had approved the extension of President`s Rule in Jammu and Kashmir for a further period of six months. The present term of President`s rule in the state is expiring on July 2.The President`s rule was implemented in the state in June last year following the collapse of the PDP-BJP alliance. The State Assembly, initially kept in suspended animation was dissolved by Governor Satya Pal Mali