Live: Both houses of Parliament adjourned till November 20

Here are the latest updates on Winter Session of Parliament.

The Winter Session of the Parliament began on Monday with PM Narendra Modi addressing the Rajya Sabha and praising the Nationalist Congress Party (NCP) and the Biju Janata Dal (BJD) for adhering to Parliamentary norms. Former Prime Minister Manmohan Singh raised red flags over undermining the role of the Upper House. Proceeding in the Lok Sabha on Monday began on a stormy note with the opposition attacking the government over the detention of MP Farooq Abdullah.

The second day of Parliament, on Tuesday, is once again expected to be action-packed with Lok Sabha set to hold discussions on the economy and air pollution the country is facing. Several crucial bills are also expected to be tabled in the Parliament today.

Both houses of Parliament adjourned till November 20.

Here are the highlights of the day

Speaker adjourns Lok Sabha till tomorrow (November 20) after proceedings of the day concluded.

BJP MP Gautam Gambhir expressed his view on Delhi pollution crisis in Lok Sabha and said that pollution is a topic which affects everyone irrespective of our caste, creed, age & religion. He further said, '' Pollution is affecting us while we stand and talk about it in Parliament. It's high time we stop politicising this issue.'' 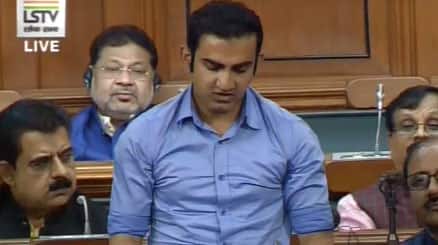 Cricketer-turned-politician Gautam Gambhir speaks on Delhi pollution in Lok Sabha, said, ''The state is that of a climate emergency - Delhi is the worst affected. The state can no longer get away with gimmick like Odd-Even & banning construction sites. We need long term sustainable solutions&stop the blame game. It's time to own up&act responsibly.''

BJP leader Sudhanshu Trivedi, on Jallianwala Bagh National Memorial (Amendment) Bill said, ''Thousands of people sacrificed their lives at Jallianwala Bagh. In future, it should be never said that we attained independence without shedding a single drop of blood. We'll never have to say that we gained freedom without 'khadag, dhaal', the freedom struggle began when thousands of people faced bullets and shed their blood.''

Lok Sabha Speaker Om Birla expresses displeasure over absence of Parliament officers and staff during important discussions in the House.

Amid discussions on pollution in Lok Sabha, TMC leader Kakoli Ghosh Dastidar said, ''When we have a 'Swachh Bharat mission', can't we have a 'Swachh hawa mission'? Shouldn't we be ensured the right to breath clean air?...In Delhi we might be staring at a situation of mass asphyxia.''

Lok Sabha: TMC leader Kakoli Ghosh Dastidar said during the discussion in pollution that out of the 10 most polluted cities in the world, 9 are in India. It is quite unnerving that a foreign Premier of a country who was on a visit to India, made an adverse comment. She said that the government should draw their attention towards it.

Lok Sabha discussion: Manish Tewari said, ''It's important that today this House gives a message to the nation that this (House), comprising the people whom they chose as their representatives, is sensitive&serious about this issue. It's not only about air pollution, our rivers are also polluted today.''

Congress leader Manish Tewari said in Lok Sabha ''When the pollution issue occurs every year in Delhi then why is it that no voice is raised from government and this House over this? Why do people need to knock the doors of the Supreme Court every year over this issue? It is a matter of grave concern.''

Parliament will now holding discussion on pollution while the debate on Chit fund bill has been scheduled for some other time.

Ministry of Home Affairs (MHA) in Lok Sabha on being asked if there is decline in stone pelting cases since the abrogation of Article 370 in Jammu & Kashmir: Yes, there has been a decline.

Next meeting of Parliamentary Standing Committee of Urban Development over air pollution in Delhi to be held tomorrow. The representatives of Ministry of Housing & Urban Affairs, Environment Ministry, municipal corporations and others will attend the meeting.

Owaisi hits back at Mamata over extremist remark:

By making allegations against me you are giving the message to Muslims of Bengal that Owaisi's party has become a formidable force in the state. Mamata Banerjee is showcasing her fear and frustration by making such comments.

BJP MP from Godda in Jharkhand, Dr Nishikant Dubey, in Lok Sabha: Pakur, Deoghar, Godda, Sahebganj, Dumka and Jamtada have become a hub for cyber-crime. It is going to be a concern for the whole country. National Investigation Agency should have an office in this area.

All India Trinamool Congress MP Pratima Mondal in Lok Sabha: Toilets are a basic necessity.Use of public toilets is one of the most common things but it isn't easy for transgender/3rd gender people.Finding gender neutral toilet in India is next to impossible.Request govt to provide infrastructure for it.

The Parliamentary Standing Committee on Information Technology to meet tomorrow to discuss issues of invasion of privacy and WhatsApp.

BSP MP Kunwar Danish Ali raises alleged use of police force on students, says, "It is condemnable how the students were lathicharged by the police. The government should apologise. A probe should be launched into the incident.'

After Lok Sabha, discussion on pollution is slated to take place in Rajya Sabha on Thursday.

Congress MPs from Assam protest against privatisation of Numaligarh Refinery:

Congress MPs from Assam, including Ripun Bora protest in front of Mahatma Gandhi statue in Parliament premises against the privatisation of Numaligarh Refinery.

Delhi: Congress MPs from Assam, including Ripun Bora protest in front of Mahatma Gandhi statue in Parliament premises against the privatisation of Numaligarh Refinery. pic.twitter.com/k9ef7HXq34

Secretariat of the Rajya Sabha after considering various suggestions came out with a new dress code for the marshals. But we've received some observations by some political as well as well-meaning people. I've decided to ask Secretariat to revisit the same: Rajya Sabha Chairman

Visual: Slogans of 'Tanashahi bandh karo, bandh karo' raised by Opposition as Question Hour gets underway in Lok Sabha. The first question in the House is on doubling of farmers income by 2022.

Delhi: Slogans of 'Tanashahi bandh karo, bandh karo' by Opposition as Question Hour gets underway in Lok Sabha. The first question in the House is on doubling of farmers income by 2022. pic.twitter.com/yUx2M64HaD

BJP parliamentary party meeting ends. The meeting was chaired by Home Minister Amit Shah in absence of PM Narendra Modi. The issue of India's decision to withdraw from the Regional Comprehensive Economic Partnership (RCEP) was also said to have been discussed in the meeting.

Harsh Vardhan to move for leave to withdraw a Bill further to amend the Indian Medical Council Act, 1956.

Harsh Vardhan to move The Surrogacy (Regulation) Bill, 2019 that the Bill to constitute National Surrogacy Board, State Surrogacy Boards and appointment of appropriate authorities for regulation of the practice and process of surrogacy and for matters connected therewith or incidental thereto, as passed by Lok Sabha, be taken into consideration.

Ashwini Kumar Choubey to lay on the Table, a Statement (in English and Hindi) correcting the answer to Unstarred Question 753 given in the Rajya Sabha on the 24th July, 2018 regarding Recruitment in CGHS Dispensaries.

Ravi Prakash Verma is to present the 325th Report (in English and Hindi) of the Department-related Parliamentary Standing Committee on Science and Technology, Environment, Forests and Climate Change on "An Expanded Role for the Department of Atomic Energy (DAE) in Cancer Treatment in India through an Enlarged Network of the Tata Memorial Centre (TMC)"

The Communist Party of India give notice in Rajya Sabha over JNU showdown, seek to discuss alleged police assault on JNU students.

Discussion on air pollution is expected to be tabled in Lok Sabha at 4 pm today.

On the second day of the Winter Session of Parliament, a discussion on the air pollution crisis will be held in the Lok Sabha. Congress’ Manish Tewari and BJD’s Pinaki Misra will initiate the discussion, which will conclude with a reply from Environment Minister Prakash Javadekar.