People in the country have given a massive mandate to the BJP-led NDA to lead India once again. The process of government formation has begun with Narendra Modi promising to continue his work for the progress of India and the welfare of Indians. Meanwhile, Congress is in a huddle. 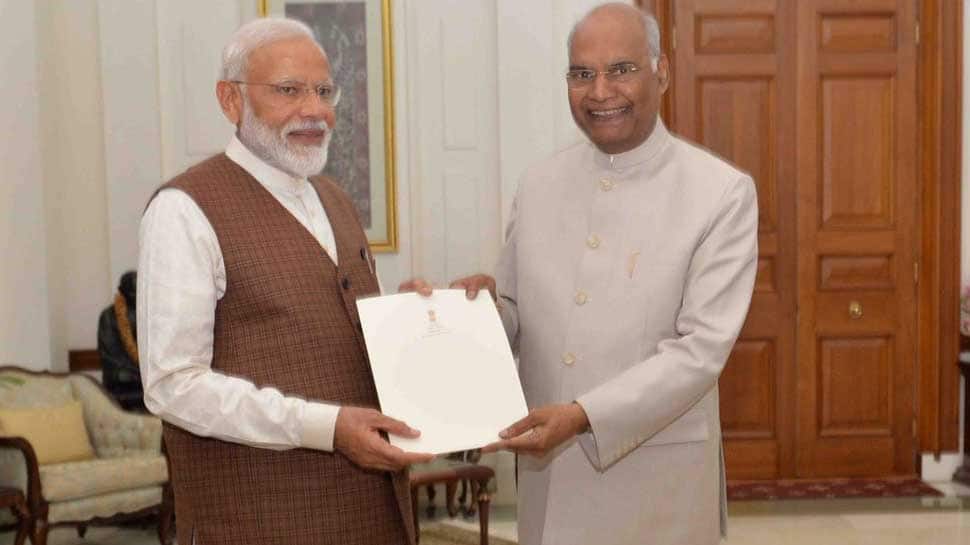 New Delhi: After receiving a thumping mandate in Lok Sabha election 2019, the Bharatiya Janata Party (BJP) is all set to form the new government along with members of National Democratic Alliance (NDA). While there has been no official announcement on when the oath-taking ceremony would take place, it is expected to be held next week.

On Friday, Prime Minister Narendra Modi met his cabinet ministers and the resolution to dissolve the 16th Lok Sabha was passed. Newly-elected NDA MPs met on Saturday and unanimously elected Narendra Modi as their leader, paving way for him to stake claim to form the new government.

THANK YOU FOR JOINING US, DO COME BACK AGAIN ON SUNDAY FOR LIVE UPDATES ON 2019 POLLS

Congress chief Rahul Gandhi continues to be adamant on his resignation, wants a non-Gandhi to be elected as the president of the party, say sources.

'Sabka saath, sabka vikas, sabka vishwas' is a mantra that shows the path to development for every region of India. I once again thank the people of the nation and assure them that the new govt will leave no stones unturned to fulfill your dreams and expectations, says PM Modi

President today gave me a letter designating me as the Prime Minister...The country has given me a huge mandate and the mandate comes with the expectations of the people: Narendra Modi

The President requested Narendra Modi to advise him about the names of others to be appointed members of the Union Council of Ministers; and to indicate the date and time of the swearing-in-ceremony to be held at Rashtrapati Bhavan, says another tweet from President's Twitter handle

Exercising powers vested in him under Article 75 (1) of the Constitution of India, President Kovind today appointed Narendra Modi to the office of Prime Minister of India, tweets President's Twitter handle.

Swearing-in ceremony of Narendra Modi as the Prime Minister likely on May 30, reports news agency ANI.

Our mothers and daughters have done a wonderful job in these elections. It is only due to them that for the first time in Independent India that such a large number of women MPs are sitting in the Parliament: Narendra Modi

NDA is moving forward on two tracks. One on regional aspirations and the second on national ambitions, says Narendra Modi

I'm talking to you after bowing before the Constitution, there can not be a 'bhed-rekha' (discrimination) for a people's representative. We are for those who were with us, we are also for those who will be with us: Modi

This is for the first time in Independent India that such large number of women MPs are sitting in the Parliament. This has been made possible due to women power: Modi

2019 election was like a pilgrimage for me: Narendra Modi.

During my campaign, I felt many times that neither I or the BJP were fighting these elections. It felt like it was being fought by the people. When journalists asked me then why am I campaigning, I told them that I was just going around thanking them: Modi

It is natural for us to feel proud about coming back to power but as the elected MP, we cannot hold on to this pride. We have to work for the ones who voted for us and the ones who didn't and we have to hope that our work will convince them: Modi.

These elections were pro-incumbency. This pro-incumbency wave is tied with the thread of trust...The trust was not only between people and govt but also among people themselves. This gave birth to that trust: Narendra Modi

2019 elections have worked towards breaking down walls and connecting hearts. In a way, they had become a way to unite the society...This gave a new height to these elections. The people have started a new era and all of us are a witness to it: Narendra Modi

You all have elected me as the leader, I think of it as a part of the system, I'm one of you, equal to you: Narendra Modi

People have accepted us due to our 'seva bhav'. One has to prepare oneself to be always ready to help people even when you move through the lanes of politics and power: Modi.

You all deserve greetings but those elected for the first time deserve an even bigger one. I offer all of you my greetings. Narendra Modi

Narendra Modi bows before the Constitution before starting his address at the NDA parliamentary meeting.

Narendra Modi addresses NDA meeting, thanks newly-elected MPs for electing him as their leader.

Narendra Modi seeks blessings from party stalwart LK Advani after being elected as the leader of BJP and NDA.

Senior BJP leader Murli Manohar Joshi greets Narendra Modi after he was elected as the leader of BJP parliamentary board and NDA at the meeting in Parliament's Central Hall.

I thank all the allies and the MPs who have unanimously chosen Narendra Modi as the leader of the NDA and the new Prime Minister of the country: Amit Shah.

Amit Shah thanks BJP allies and newly-elected MPs for electing Narendra Modi as the leader of NDA.

Amit Shah proposes Narendra Modi's name as the leader of BJP's parliamentary board. Party leaders Rajnath Singh, Nitin Gadkari and others support it.

PM Narendra Modi present during the NDA Parliamentary board meeting.

Meeting of newly-elected NDA MPs underway at the Central Hall of Parliament.

The central forces worked against us. An emergency situation was created. Hindu-Muslim division was done and votes were divided. We complained to the EC but nothing was looked into: Mamata

I told at the beginning of the meeting that I don't want to continue as the Chief Minister: Mamata Banerjee.

Narendra Modi ji has worked very hard and he has impressed the entire country. As I have also won, I'm happy that I delivered some good work in my constituency, that is why I got here: Newly-elected BJP MP from Mathura Hema Malini.

Newly elected MPs and other leaders arrive for the NDA Parliamentary Board meeting in the national capital.

Delhi: Newly elected MPs and other leaders arrive for the NDA Parliamentary Board meeting. pic.twitter.com/NgglC9aCaS

There is no need for Rahul Gandhi's resignation, he works hard, says Ashok Chavan.

All the state Congress chief should give mass resignation from their post taking responsibility for the party's defeat, says Ashok Chavan.

Congress leader Ashok Chavan offers to resign from the post of MPCC chief taking responsibility of the party's debacle in Maharashtra.