Locals protest cutting of 14,000 trees in Delhi, AAP and Centre pass the buck

Delhi High Court has questioned if the city can afford trees being cut for the sake of roads and buildings. 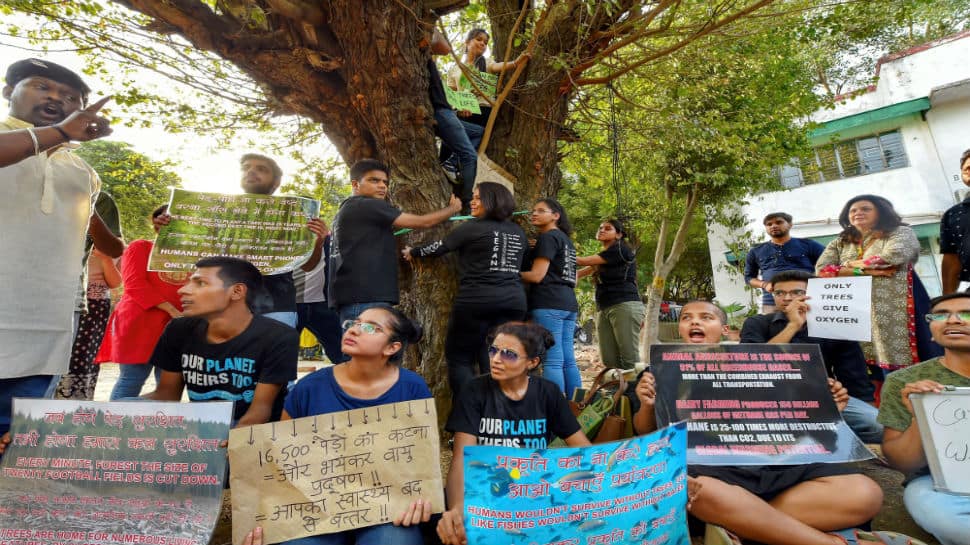 New Delhi: Even as Delhi continues to be one of the most polluted cities in the world, trees are being cut in the name of development projects here. Now, local residents and environmentalists have come out strongly against a move to axe 14,000 trees in south Delhi - forcing the AAP government and the Centre to blame each other.

Close to 16,500 trees face the axe in areas in south Delhi's areas of Sarojini Nagar, Nauroji Nagar, Netaji Nagar, Thyagraj Nagar, Mohammadpur and Kasturba Nagar. of these, 1500 trees have already been felled. The trees are being cut to make for government quarters in these areas. While agencies have promised to plant 10 saplings for every tree cut, environmental bodies are up in arms against the move to cut trees - especially in a city which has the notorious distinction of being one of the most polluted in the world - if not the most polluted.

Local residents and green bodies have come out on streets to protest against the decision to cut trees and have pointed out how it could further deteriorate the air quality in the city. That these trees are in residential areas means that cutting them could have a deep impact on health quality of people living here. It is a known fact that trees filter the air - apart from their numerous other benefits, and environmentalists have termed axing of thousands of trees as nothing short of a criminal offence. They further question the justification of planting 10 saplings for each tree cut and have pointed out that there is no mechanism to check where, when and by whom would these be planted.

An online campaign to halt the cutting of the trees gained a lot of momentum last week.

Meanwhile, the anger among people and green bodies has once again resulted in AAP and Centre blaming each other over who authorised the felling of trees. While AAP on Sunday held a protest against the cutting of trees, union minister Hardeep Singh Puri said the green cover in the areas where the trees would be cut, would be expanded three times. It was an assurance for which he was massively trolled on Twitter.

Be careful with your tone. Just because I am a public servant, you cannot take the liberty of being offensive. All this predates me. The decision taken will ensure that at no point of time will there be even one less tree in the area. Read r press release, if you have interest.

The issue has snowballed into a massive controversy with many now urging PM Narendra Modi to step in.

On Monday, the Delhi High Court reserved its order till July 4 even as it asked if the city can afford trees being cut. "Can Delhi afford cutting of trees for the development of roads and buildings. Don't cut anymore trees till 4th July (next date of hearing in the case)," the court said.