Pakistan PM had said he sees "zero" political or military role for India in Afghanistan, weeks after US President Donald Trump sought more help from New Delhi in Afghanistan 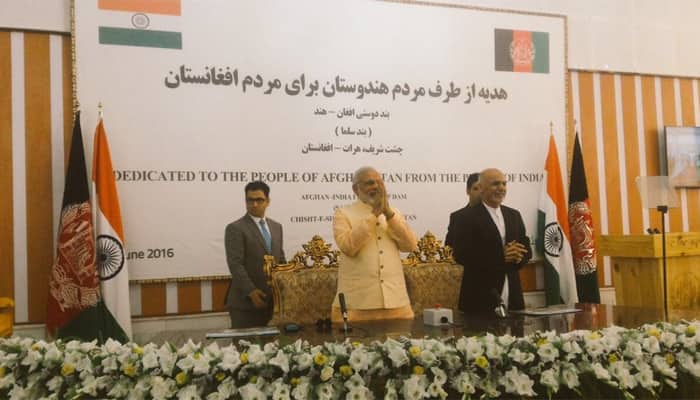 NEW DELHI: Hitting back at Pakistan Prime Minister Shahid Khaqan Abbasi`s statement on India's role in Afghanistan, the External Affairs Ministry on Thursday said New Delhi is clear about it's part in the war-torn nation.

We do not agree with Pakistan Prime Minister Shahid Khaqan Abbasi`s statement about no role of India in Afghanistan, said MEA spokesperson Raveesh Kumar.

"Our position is very clear and consistent as we do not differentiate between good and bad Taliban. There are several forums for meetings on Afghanistan. We are members of some of them," said Kumar.

The MEA was briefing the media on the recently concluded Shanghai Cooperation Organisation (SCO) meet in Moscow.

India has expressed interest in working closely with the SCO member states (China, Kazakhstan, Kyrgyzstan, Russia, Tajikistan, Uzbekistan, Pakistan) in working towards a peaceful and stable environment in Afghanistan.

"India has conveyed its readiness to work closely with the Shanghai Cooperation Organisation (SCO) member states in efforts to bring peace, prosperity and stability in Afghanistan," said the MEA.

The SCO recently concluded its first meeting held after inducting India and Pakistan as its fulltime member in June.

"The Indian side also stressed on the need for an Afghan- led, Afghan-owned and Afghan-controlled national peace and reconciliation in an environment free of terror and violence, continued assistance for socio-economic development based on priorities of the people of Afghanistan, and ensuring greater connectivity and regional integration for Afghanistan,” he added.

Secretary (West) in the Ministry of External Affairs, Ruchi Ghanashyam led the Indian delegation to the meeting of SCO-Afghanistan Contact Group Meeting that was held in Moscow on October 11, 2017.

In September, Pakistan PM Shahid Khaqan Abbasi had said that he sees "zero" political or military role for India in Afghanistan. The statement came weeks after US President Donald Trump sought more help from New Delhi to bring peace and stability in the war-torn country.

Earlier this month, US Defence Secretary Jim Mattis had said that India's decision not to send its troops to Afghanistan in view of Pakistan's considerations will bring new complexities in the region.