Pained at what happened in Rajya Sabha today, it was very shameful, says Rajnath Singh

Hours after the unruly scenes unfolded in the Upper House of the Parliament on Sunday, six Union Ministers held a press meeet in the national capital to condemn the behaviour. 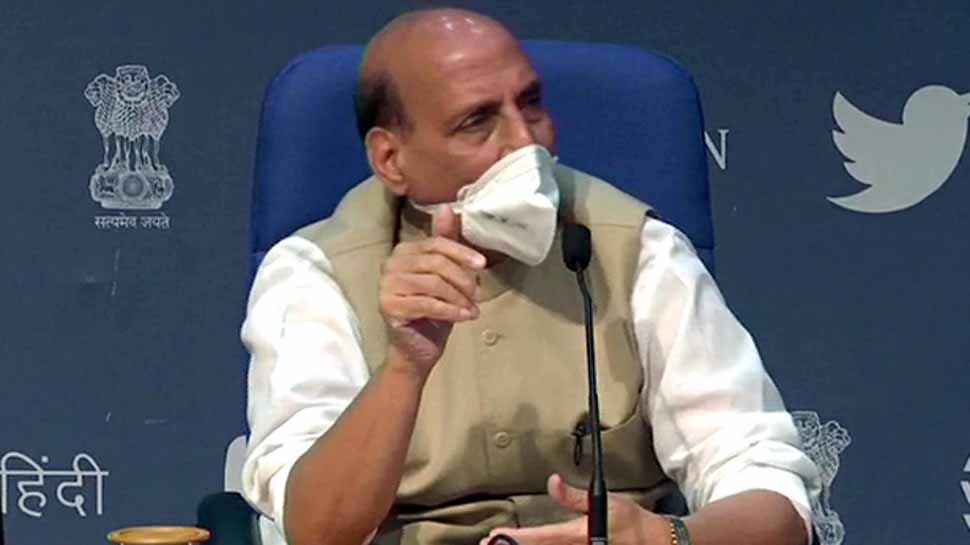 New Delhi: Hours after the unruly scenes unfolded in the Upper House of the Parliament on Sunday (September 20, 2020), six Union Ministers held a press meeet in the national capital to condemn the behaviour.

He said, "What happened in Rajya Sabha today was saddening, unfortunate and shameful. It is the responsibility of the ruling side to enable discussions in the House but it is also the duty of the Opposition to maintain decorum. There are some political reasons behind every such decision. I don't want to comment on why did she take this decision."

The commotion took place as Opposition parties protested the two farm bills; The Farmers` Produce Trade and Commerce (Promotion and Facilitation) Bill, 2020, and The Farmers (Empowerment and Protection) Agreement on Price Assurance and Farm Services Bill which were moved in the Rajya Sabha today.

Condemning the incident, Singh said, "The whole country witnessed the misbehaviour done with Dy Chairman Harivansh. Tearing rule book and hindering the chair's path is unprecedented. The pride of Parliament was hurt today."

On the farm bills Singh said, "I am also a farmer and was the agriculture minister and I can never believe that the government of which we are part of will take any step against the interest of the farmers."

Singh said that attempts are being made to mislead the farmers and assured that the Centre will not end the system of Minimum Support Price (MSP) and Agricultural Produce Market Committee (AMPC) Act.

"When the discussion was taking in Rajya Sabha over two agriculture bills, it was saddening, unfortunate and shameful. I know that it is the responsibility of the ruling side to run the House smoothly. The support of the Opposition is also expected. The confusion was created among farmers for their vested interests. It is not good for healthy democratic values," the Defence Minister said.

Meanwhile, Vice President and Rajya Sabha chairman M Venkaiah Naidu held a high-level meeting at his residence expressing his displasure at the ruckus created in the Raya Sabha as the agriculture bills were being moved in the House, ANI reported.

Naidu held the meeting with Rajya Sabha Deputy Chairman Harivansh, Union Minister Piyush Goyal and Parliamentary Affairs Minister Pralhad Joshi in attendance. Details of the meeting have not be revealed yet.

According to sources, Naidu is mulling action against the unruly legislators, though, nothing has been confirmed offcially.

Mukhtar Ansari is in 'depression' due to the fear of Yogi?