It is prerogative for the international human rights defenders to take cognizes of the continuous genocide against religious minorities in Pakistan. 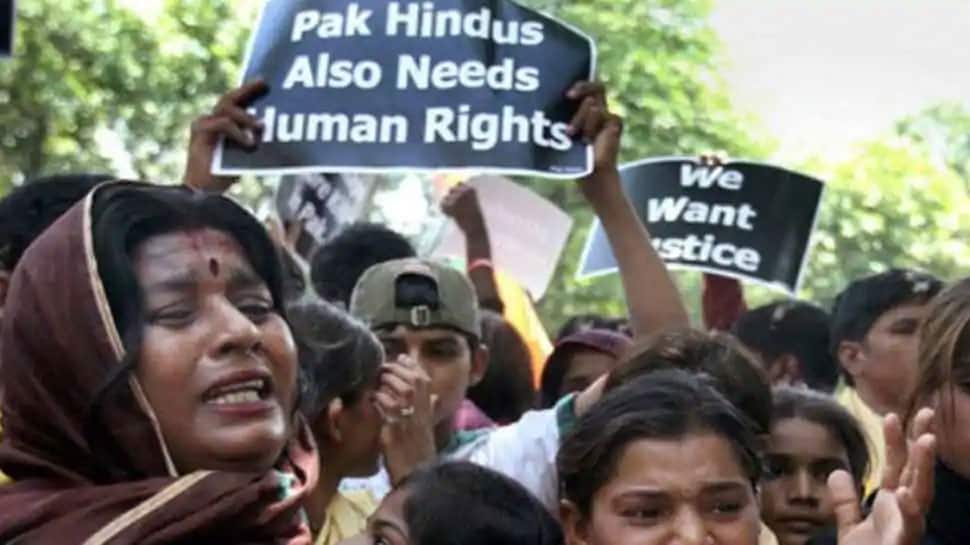 NEW DELHI: In a comprehensive onslaught on marginalized communities, simultaneous attacks have been launched on minorities of Pakistan. In the most recent case, a 17-year-old Sikh girl was abducted from her home and was forcibly converted.

The girl was kidnapped from her home in Hassanabdal city of Attock district on August 31. However, it took more than two weeks for the news to surface in the media as the Pakistani press was hardly bothered to cover the unfortunate incident.

As soon as this news surfaced in the media, Pakistani envoy to India was summoned by the Indian government over the issue, followed by a protest by the Sikh groups in front of the Pakistani embassy in New Delhi.

Sikhs who inhabited the landmass known as Pakistan in millions during the partition now number below 10,000. The silence of pro-Khalistani forces in the West raises serious questions on their intentions and reinstates the fact of Pakistani-Khalistani nexus highlighted by veteran Canadian journalist Terry Milewski in his latest report 'Khalistan: A project of Pakistan'.

Amidst all this, it is Sikhs who face continued genocide in Pakistan.

The Christian community has also come under numerous attacks and abductions by radical Islamists in the past few weeks. According to media reports, an underage Christian girl Sanesha Kinza Iqbal on her way to the local church in Faisalabad was abducted by 30-year-old Saeed Amanat on July 22. It took almost a month for the girl's family to get a police complaint filed.

The girl was converted to Islam and forcibly married to her abductor, who continue to roam free and threat the minor's family to go through dire consequences in case they demand their daughter's return.

On 4 August, the Lahore High Court ordered Maria Shahbaz to return to her abductor Mohammad Nakash, who abducted  her at gunpoint. The court also asked her to get married to the abductor. However, it was later reported that the girl managed to escape from her abductor’s house and fled to Faisalabad along with her mother and siblings.

According to International Christian Concern — an organisation looking after human rights issues of the Christian community, reported that policemen attacked a Christian youth Younis Masih and his sons on 21, June on false charges and looted the house. Masih’s sons were also forcibly detained by the police and taken away. Younis Masih went through a heart attack after a couple of hours and left the world soon after.

Musclemen from the Muslim community have now occupied the land and tied their cattle to it. Law enforcement agencies have seemingly refused to act on the issue and it is believed the land has been permanently lost by the Christian community.

Christian workers with vulnerable economic status are facing the biggest heat from radical Islamists of Pakistan. Last month, an 18-year-old Christian domestic maid was tortured and exploited by her Muslim employer in Lahore for refusing to forcibly convert to Islam.

She claimed that she often got beaten up and abused for touching utensils of the family as a part of her routine work as she came from a different faith. In the same month, a sanitation worker belonging from the Christian community was attacked by a Muslim mob in Gujranwala district of Punjab for pushing his garbage trolley through a Muslim area while they were celebrating Eid-al-Azha festival.

In a similar incident, a Christian autorickshaw driver was beaten up by a Muslim mob after he was barred from picking up Muslim passengers because of his religion. The auto driver - Nasir Parvaiz told Pakistani media that he was not allowed to take passengers in the front of a clinic in Phoolnagar of Punjab province. He claimed that often rickshaw wallahs teased him because of his name and he was chased away from picking up passengers because of his religious identity. He also argues that people have been calling him names and terming him as an ‘untouchable’.

Similarly, radical Islamists are also exploiting economic distress to convert Christians to Islam. In August 2020, a Christian elderly couple from Khanewal district of Punjab was forced to convert in order to clear off debts. The couple, Sultan Masih and Sofia Bibi, borrowed a loan from a Muslim merchant to run their business. However, due to economic distress and ongoing pandemic, they were facing difficulties clearing off their debt. The merchant asked the couple to either convert to Islam or face consequences. Consequently, the couple had to convert to Islam during a ceremony organised by the merchant.

Collectively, there were over two dozen incidents of attacks, abductions and forced conversions of the Christian minorities by radical Islamists in Pakistan in the past two and a half months. This highlights the intensity of the persecution being faced by the Christian community in Pakistan.

Besides attacks on Sikh and Christian communities, a senior citizen from the persecuted Ahmadiyya community was shot at by two assailants in Peshawar on August 14 - Independence Day of Pakistan. A spokesperson of the community termed it a targeted attack and a hate crime against the community member. He also argued that the families of deceased senior citizens were also receiving death threats from radical Islamists on religious grounds.

Recently, on International day of Enforced Disappearances (30"August), the Human Rights Commission of Pakistan (HRCP) asked the Pakistan government to criminalize the offense of enforced disappearances through a full-fledged law. Currently, several activists and civilians have been missing for quite a lot of time — as long as over a decade. The locations and whereabouts of activists like Dr. Deen are still unknown even after over a decade of their disappearance.

Similarly, Pakistan is also coming under immense pressure from international human rights defenders for the enforced disappearance of a prominent human rights activist from Khyber Pakhtunkhwa late last year. Pakistani media had exposed that he was detained by the government and was charged under the Official Secrets Act and was being tortured. His current location and status are yet unknown.

According to Pakistan's own claims, currently, 2,113 cases of enforced disappearances are yet to see progress. However, many human rights defenders believe that the actual number could be fourfold of what Pakistan has been officially claiming.

Recently on August 17, relatives and acquaintances of involuntarily disappeared Shias under the banner of 'Joint Action Committee for Shia Missing Persons' launched a vigorous protest in front of the Governor's house in Karachi. They demanded the immediate release of 149 Shia community members who were arbitrarily detained. The protesters were determined and refused to back off. The protest ended only after Federal Minister Ali Haider Zaidi met the protestors and went into a dialogue with them.

It is prerogative for the international human rights defenders to take cognizes of the continuous genocide against religious minorities in Pakistan. It is also important for researchers to document the incidents and tabulate in order to highlight the magnitude and intensity of attacks on minorities. Many believe that besides United Nations Agencies, the Special Procedure Mandate Holders of the UN need to be apprised about these incidents and requested to take cognizance, thereby pressurizing the Pakistani government to check the ongoing massacres. Hence the need for the hour for the civil society to reach out to Special Procedure Mandate Holders recurrently, in large numbers, urging them to take action on the ongoing genocide.