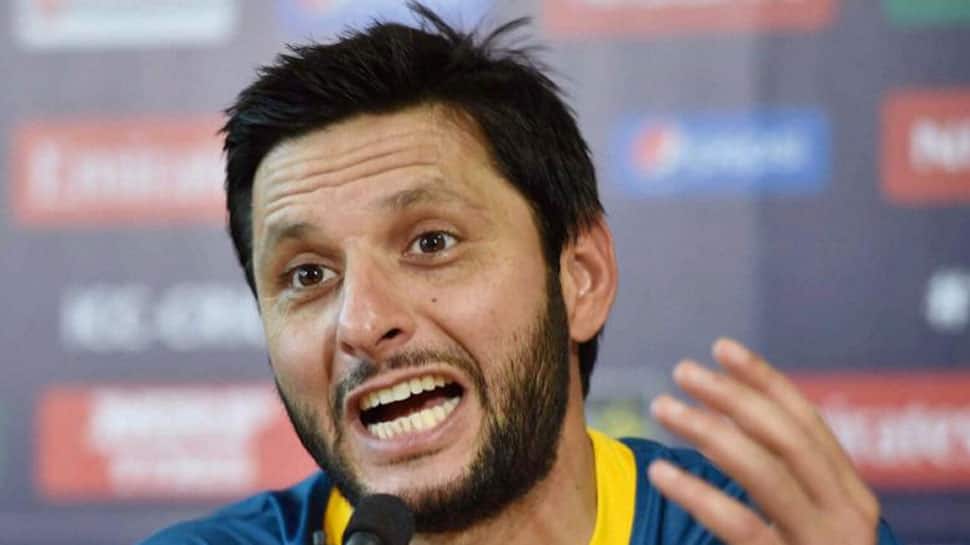 New Delhi: Former Pakistani cricketer Shahid Afridi on Tuesday raked up the 'Kashmir issue' and pitched for 'self-determination and independence' of the valley. The player took to Twitter and posted, "Appalling and worrisome situation ongoing in the Indian Occupied Kashmir. Innocents being shot down by oppressive regime to clamp voice of self -determination and independence. Wonder where are the UN and other international bodies and why aren't they making efforts to stop this bloodshed?"

Appalling and worrisome situation ongoing in the Indian Occupied Kashmir.Innocents being shot down by oppressive regime to clamp voice of self determination & independence. Wonder where is the @UN & other int bodies & why aren't they making efforts to stop this bloodshed?

Two of the killed terrorists were identified as Rayees Ahmad Thoker and Ishfaq Ahmad Malik. The duo was responsible for shooting Indian Army officer Lieutenant Ummer Fayaz dead in May 2017 when the officer was at his home on a holiday.

Afridi was trolled on the social media for his remarks by Indians, though there were some from the Pakistani side who backed him.

Just a Correction : it's a "Pakistan Occupying Kashmir" .. KASHMIR WAS, IS AND WILL BE A INTEGRAL PART OF INDIA.

Even Pakistani's wanted to be in India, feel lucky to be Indian

Being a respected man and cricketer you should not be too much indulged in political situation of other countries and focus on wellbeing of Pakistan!!!

Man do you know in other countries like UK ,China, US, Russia if you pelt stone against their army they will kill you, contrary to this we use pellet first then if the situation goes berserk we use bullets

Afridi i respect you as a cricketer and you have a right to express your views. The situation you are talking about is due to terrorists trained, funded and infiltrated by your very own country. I hope u give a msg to your Army as Govt ur mere puppet. Also talk of Baloch massacre

Afridis comment is based on fake local newspapers?
Its for world to see who is epicenter of terrorism. Forgot Osama, Kasab? Pakistan must stop instigating, brain washing and training Kashmiri and Paki youths for terrorism. If you r serious you must ask ur rulers to stop it.

Hahaha You must be kidding man. You need to change the tv news channel that you follow. If not you need to rather study again from a diff. school coz all the info that ur shooting r baseless.They feed you all fake stuff.

Lala bhai Indian army is prepared to occupy POK, inshallah will do that very soon, till then pakistan may keep sending jihaadis , will keep sending them to 72 vergins ..

This is not the first time that Afridi has raised the 'issue of Kashmir'. During the World Twenty20 match against Australia in Mohali in March 2016, he had thanked 'fans from Kashmir' for supporting Pakistan.

“I want to thank people who came and supported us from Pakistan and Kashmir," Afridi had said in the post-match presentation in Kolkata after a 21-run loss to Australia that knocked his team out.

I want to thank people from Calcutta. I thank people who came and supported us from Pakistan and Kashmir: Shahid Afridi

Reacting to his comments, the then BCCI secretary Anurag Thakur had said that the Pakistani cricketer's remark was “not politically correct”. "A player should stay away from all this," he had added.

Afridi's remarks had come after he was criticised in Pakistan for saying a couple of days back he had received more 'love from Indian fans than cricket lovers in his country'.

“I’ve not enjoyed playing anywhere as much as I have in India. We have not got this much love even from Pakistan,” he had said. After facing criticism, he had said that his remarks were for those who are educated.

Afridi retired from international cricket in 2017 and played 27 Tests, 398 ODIs and 98 T20Is for Pakistan. He led his country in the ICC World Cup 2011. Afridi holds the record of having hit the most number of sixes in the history of ODI cricket.

No plan to change reservation policy: Rajnath Singh on row over dilution of SC'ST Act