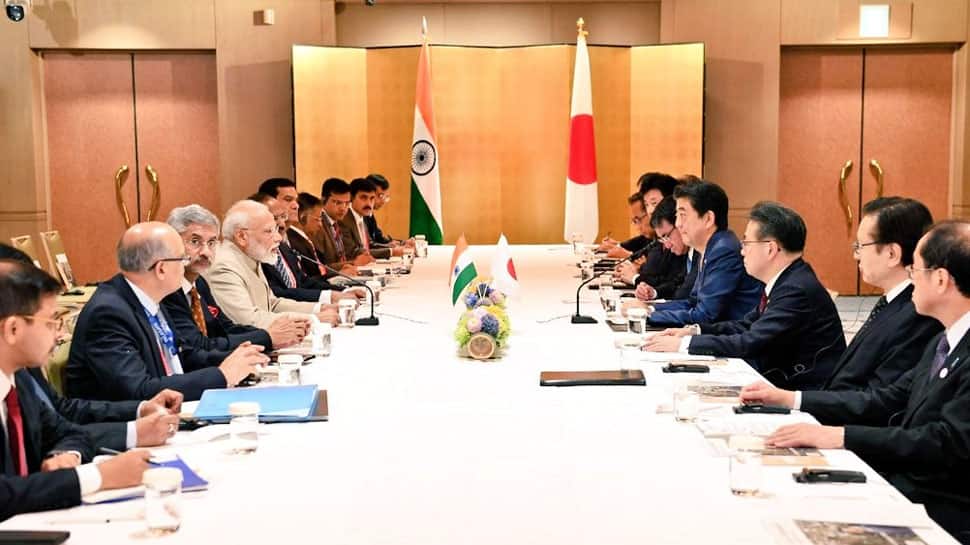 PM Modi thanked PM Abe for calling him and congratulating on his recent victory and said, "Shinzo Abe was the first friend to congratulate me. I would like to thank PM Abe for this."

Appreciating the G20 Summit, the Prime Minister said, "Your work as G20 Chairman is appreciable and congratulatory."

PM also congratulated the people of Japan and PM Abe for the new Reiwa era – which began on May 1, 2019, after Emperor Akihito's eldest son Naruhito ascended the throne as the 126th Emperor of the island nation. Former Emperor Akihito abdicated the Throne on April 30, 2019. President Ram Nath Kovind will represent India at the enthronement ceremony of Naruhito as the Emperor of Japan on October 22, 2019.

During the bilateral meet, both sides discussed connectivity issue, Indo-Pacific and infrastructure projects. "Connectivity issue was touched upon. First was Act-East Forum, both agreed on Jt. Operations in thrid countries like Sri Lanka, Bangladesh and Myanmar. Indo Pacific is essentially a connectivity issue. The seamless connectivity of two major oceans,” Foreign Secretary Vijay Gokhale said in a press conference later on Thursdau.

PM arrived in Japan for a three-day visit on Thursday morning and was received by Japanese Parliamentary Vice-Minister for Foreign Affairs Kenzi Yamada and Mayor of Osaka city at Kansai Airport. On his arrival he tweeted, "Reached Osaka to join the #G20 Summit. Grateful to the dynamic Indian community for the warm welcome!".

Indian Prime Minister's three-day visit is packed with 10 bilateral meetings and more than five pullasides. He will be meeting US President Donald Trump on Friday. The meeting comes a day after US Secretary of State Mike Pompeo met PM Modi in Delhi.

President Trump ahead of his meeting with PM Modi has said he will be talking about high tariffs India has been imposing on US. "I look forward to speaking with Prime Minister Modi about the fact that India, for years having put very high Tariffs against the United States, just recently increased the Tariffs even further. This is unacceptable and the Tariffs must be withdrawn!" tweeted Trump.

President Trump has been very vocal about tariffs especially from India. He has been referring to India as a "tariff king" and demanding to reduce tariffs on Harley Davidson motorbikes.