Prime Minister Narendra Modi will turn 69 on Tuesday, September 17. Not taking any break for his birth anniversary, PM Modi's schedule is packed with events and public meetings in his home state Gujarat. 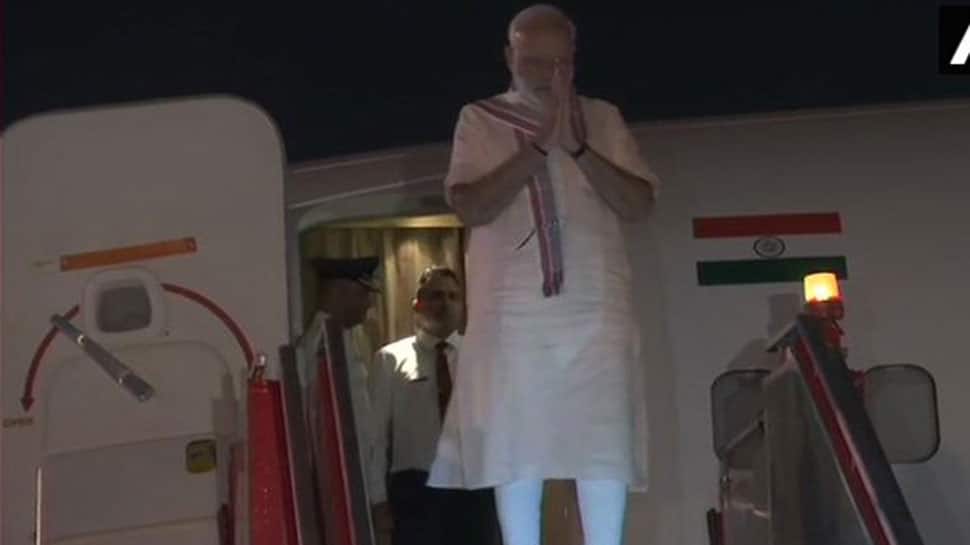 Ahmedabad: Prime Minister Narendra Modi will turn 69 on Tuesday, September 17. Not taking any break for his birth anniversary, PM Modi's schedule is packed with events and public meetings in his home state Gujarat.

PM Modi reached Ahmedabad airport at 11 pm on Monday, from where he would directly proceed towards Raj Bhawan and spend the night. He was received by Chief Minister Vijay Rupani and Governor Acharya Devvrat.

On September 17, PM Modi will begin his day by taking blessings of his mother Heeraben Modi.

Following this, PM Modi would depart for Narmada river bank at 8 am from Gandhinagar Secretariat. He would perform Narmada Aarti to river Narmada and take part in 'Namami Devi Narmade festival', which is being organised across the state to mark filling up of the Sardar Sarovar dam to its full capacity.

The water level of the dam has reached the historic height of 138 metres, just 68 centimetres short of its full capacity mark. It is expected to reach the full capacity mark on September 17, coinciding with PM Modi's birthday. PM Modi will be present at Sardar Sarovar dam to witness the milestone of achieving full reservoir capacity of 138.68 metres.

PM Modi would also meet the top officials of Jungle Safari and Tourist park constructed near the dam to boost the tourism in Narmada district. Later PM Modi will address a public meeting in the district, on the occasion of his birthday.

After this, PM Modi would visit Garudeshwar Dutt Mandir in Narmada's Kevadiya and offer his prayers. After wrapping up his visit, PM Modi would depart for Delhi at 12 pm on Tuesday.