During the same conversation, PM Modi had raised the issue of violent protests that took place outside the Indian High Commission by Pakistani and Khalistani groups on August 15 with the British Prime Minister. 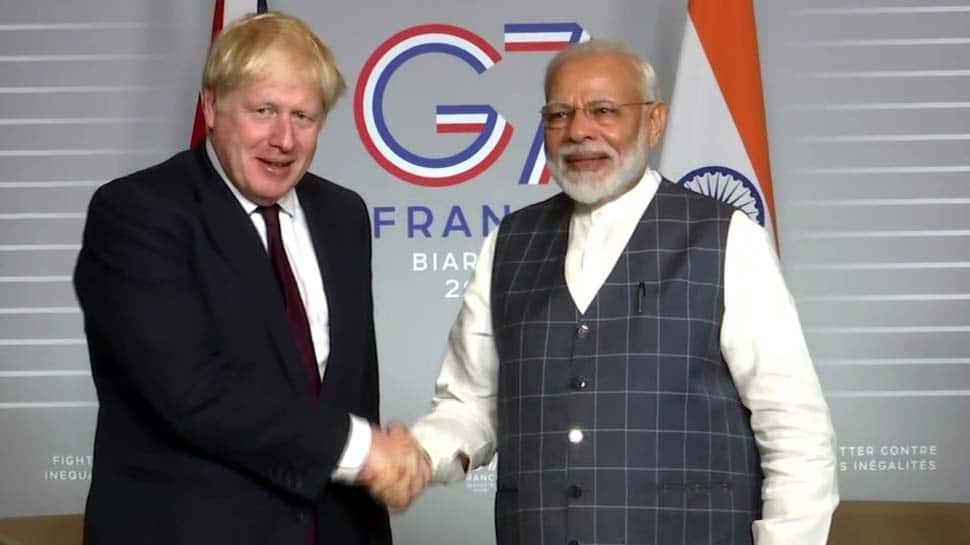 New Delhi: Prime Minister Narendra Modi held bilateral talks with the British Prime Minister Boris Johnson on the sidelines of G7 summit in France on Sunday. This is the first meet between the two leaders since Boris Johnson took charge of office and it took place lasted for 30 minutes. Both the leaders had a conversation last week in which PM Modi congratulated him on assuming charge as the British PM.

During the same conversation, PM Modi had raised the issue of violent protests that took place outside the Indian High Commission by Pakistani and Khalistani groups on August 15 with the British Prime Minister.

A government readout said, that Prime Minister Modi "drew attention to the challenges posed by vested interests pursuing their motivated agenda, including by violent means". "In this context he referred to the violence and vandalism perpetrated by a large mob against the High Commission of India in London on the last Independence Day of India," it added.

The British Prime minister has regretted the incident and assured the safety of the Indian High Commission. The UK has also made it clear that Kashmir is a bilateral issue between India and Pakistan.

A UK government readout on the same telephonic conversation said, "The Prime Minister and Prime Minister Modi discussed the current situation in Kashmir. The Prime Minister made clear that the UK views the issue of Kashmir is one for India and Pakistan to resolve bilaterally. He underlined the importance of resolving issues through dialogue."

The UK has also cleared that that it did not support any statement from the United Nations Security Council (UNSC) during the consultative meet, called at the behest of China on August 16 at the backdrop of India removing the special status for the erstwhile state for Jammu and Kashmir.