Prime Minister  Narendra Modi will inaugurate Kashi-Vishwanath Corridor on December 13 which will be attended by CM Yogi and 3000 saints and dignitaries. This program will be shown live in 51,000 places, mostly the Mandal unit of Bharatiya Janata Party. It will also be shown in big famous temples, monasteries, and educational institutions. 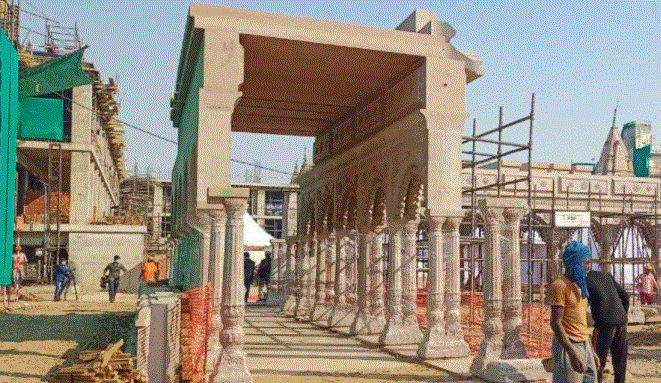 Sharing the outline of upcoming programmes, Reddy said, "This is a step towards fulfilling Prime Minister Narendra Modi`s dream. Since childhood, we all have been hearing that Kashi is a Mokshadayini city. We want to present its beautiful picture in front of everyone so that people can sit anywhere and see the cultural city of Kashi."

Tarun Chugh said, "It has been almost 100 years since repair and reconstruction work of Kashi Vishwanath temple was undertaken. Every devotee who visits Kashi wonders how the cultural city of India would have been. When Prime Minister Narendra Modi visited here, he took a pledge to rebuild it."

"Today`s Kashi is an example of great work done by our Prime Minister keeping in mind the grandeur of culture, heritage, prayer and dialogue with the people," said Chugh, adding "Prime Minister will inaugurate Kashi-Vishwanath Corridor on December 13 which will be attended by CM Yogi and 3000 saints and dignitaries. This program will be shown live in 51,000 places, mostly the Mandal unit of Bharatiya Janata Party. It will also be shown in big famous temples, monasteries, and educational institutions."

Sharing details of scheduled programmes, Chugh said, "It has been planned to show this program in at least one district centre of every district of the country. Chief Ministers and Deputy Chief Minister of BJP ruled states will come to attend the programme on December 13, 14 and 15. A meeting will be held where Chief Ministers will discuss the welfare schemes for the poor which will be attended by PM Modi, JP Nadda, Organization Minister BL Santosh."

He said, "A programme will be organised every day after December 14. On December 17, a conference of mayors from all over the country will be held in Kashi," adding "On December 23, a huge program will be held on organic farming which will be attended by farmers and scientists from all over the country. January 12 is the birthday of Swami Vivekananda. On that day there will be a Bharatiya Janata Yuva Morcha Youth Conference in Kashi, in which thousands of youth will gather."

According to the BJP leader, "On December 10 and 11, workers of Bharatiya Janata Party will conduct a cleanliness drive in all temples and monasteries across the country. From tomorrow (Dec 8) there will be dialogue programs which will go on till December 12 and for this, Bhajan Mandals will come up in thousands."

Accordingly, a dialogue programme that initiated from Wednesday will go on till December 12. Bhajan Mandlis will tour the city to energise the environment.

He said, "Entire Kashi will be decorated so that December 12 looks like Diwali. Light and sound show and other programmes will go till December 14," adding "After December 13, the work dedicated to Lord Vishwanath ji Dham will start. History books will be distributed in the form of `prasad` in every household. A separate committee has been formed which will look after the program organised till December 14."

"A separate committee for Kashi has also been formed by BJP UP. We have also formed a dedicated committee under the aegis of Divya Kashi Bhavya Kashi so that we reach each and every household. This program will be shown live in 27,000 places of UP. The temple of Sarnath has also been added in it. Through this festival, we will connect the grandeur of Kashi, the divinity, the mythological history of Kashi, with the digital medium," the BJP leader added.