Leading the attacks on the Governor were former chief ministers Mehbooba Mufti and Omar Abdullah, who have been arch rivals in the polity of the state. 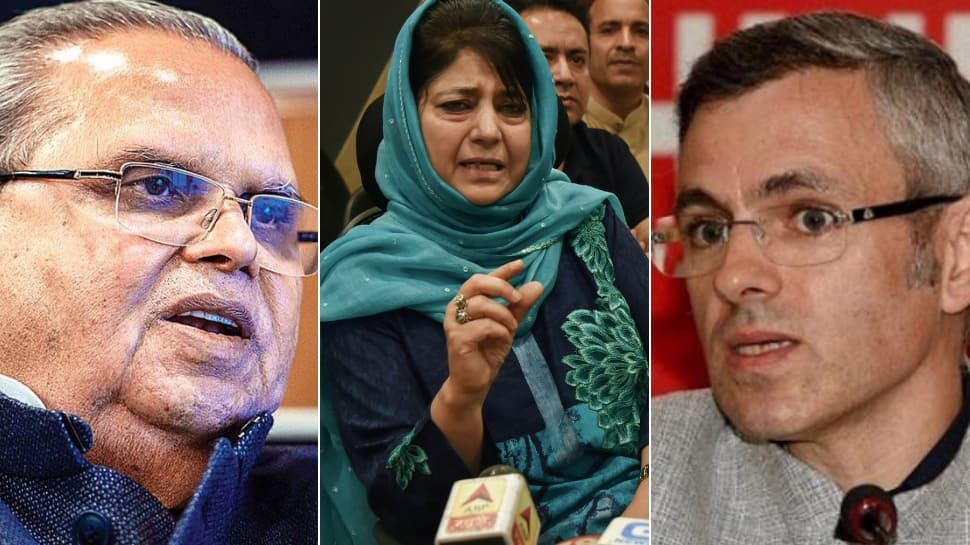 A fresh political storm erupted in the Jammu and Kashmir on Wednesday as Governor Satya Pal Malik dissolved the Assembly even as former chief minister Mehbooba Mufti-led Peoples Democratic Party (PDP) staked claim to form government with the support of the National Conference and the Congress party.

The decision of the Governor did not go down well with the PDP, the National Conference and the Congress party, who decided to form an unprecedented alliance in Jammu and Kashmir. Leading the attacks were former chief ministers Mehbooba Mufti and Omar Abdullah, who have been arch rivals in the polity of the state.

Expressing shock over the decision of the Governor to dissolve the Assembly in a sudden manner, both Mehbooba and Abdullah claimed that they had been demanding the same for the past five months but their repeated requests were not paid any heed to.

Taking to microblogging site Twitter, the PDP chief said, “In my twenty six year old career as a politician, I thought I had seen it all! But like they say never say never! Nevertheless, I would like to express my heartfelt gratitude to @OmarAbdullah and @Ambikasoni4 ji for helping us achieve the seemingly impossible.”

Mehbooba said that the “grand coalition” had given “jitters” to the Bharatiya Janata Party (BJP)-led central government. “Since the past five months, regardless of political affiliations, we shared the view that the state assembly be dissolved immediately to avert horse trading & defections,” she tweeted.

“Oddly enough our pleas fell on deaf ears. But who would have thought that the very idea of a grand coalition would give such jitters.”

She also raised question on the Governor’s House fax allegedly not receiving her fax, “but swiftly issued one regarding the assembly dissolution.”

Her sentiment was echoed by Omar Abdullah, who retweeted her tweets and said it cannot be a “coincidence” that the decision to dissolve the state Assembly emerged soon after Mehbooba shared the letter to stake claim to form the government.

“JKNC has been pressing for assembly dissolution for 5 months now. It can’t be a coincidence that within minutes of Mehbooba Mufti Sahiba letter staking claim the order to dissolve the assembly suddenly appears,” he said.

Retweeting Mehbooba, Abdullah further said, “And I never thought I’d be retweeting anything you said while agreeing with you. Politics truly is a strange world. Good luck for the battle ahead. Once again the wisdom of the people will prevail.”

The Congress termed the move of the Governor as “unconstitutional” and “undemocratic”. Senior Congress leader Saifuddin Soz said that Mehbooba must move the court, alleging that the development was on the instructions of the central government.

Former J&K chief minister Ghulam Nabi Azad also attacked the BJP over the issue, saying, “I said this afternoon also that it's a suggestion & no final decision has been taken yet (on PDP-NC-Congress alliance). BJP dissolved the assembly even though only a proposal was made.”

The BJP on its part defended the move, terming the new partners of the rival alliance as “terror-friendly parties”. Citing the security situation in Jammu and Kashmir, the BJP tweeted that “the best option in such a scenario is to go in for a fresh election at the earliest. This assembly cannot produce a stable government.”

“The proposed alliance between the INC and the PDP broke up even before it was formed. They have taken contradictory positions on dissolution. One supports it and the other opposes it.

“Keeping the security scenario of J&K in mind, can it afford horse-trading and instability? J&K needs a firm administration to deal with terrorism and not a combination of terror-friendly parties,” the BJP further said in a tweet.