SC said while providing dry ration, the authorities of the states “shall not insist on an identity card for those migrant labourers who do not possess for the time being and on self-declaration made by the stranded migrant labourers dry ration be given to them.’’ 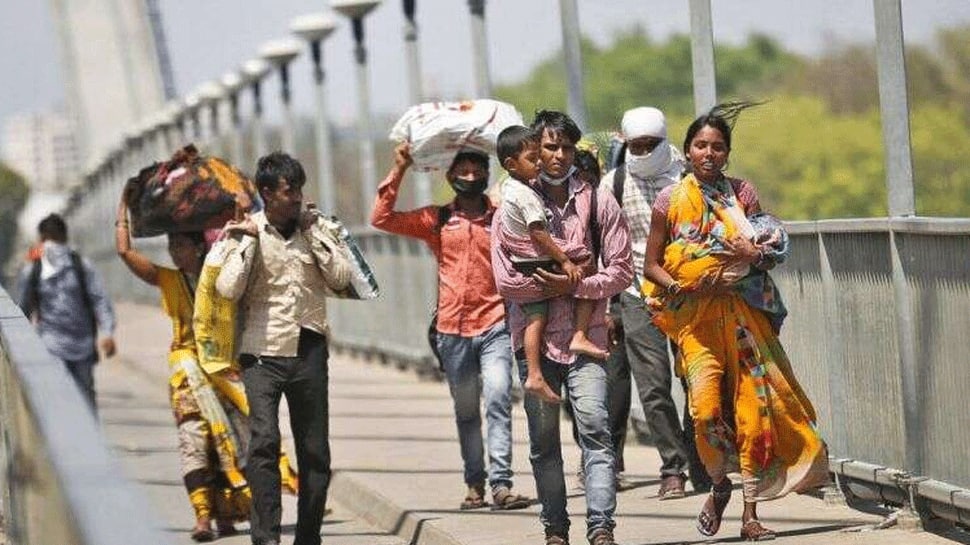 New Delhi: The Supreme Court has directed the governments in Delhi, Uttar Pradesh and Haryana to open community kitchens in the NCR for stranded migrant workers amid the current wave of COVID-19 pandemic and facilitate transportation for labourers who want to return home.

It said while providing dry ration, the authorities of the states “shall not insist on an identity card for those migrant labourers who do not possess for the time being and on self-declaration made by the stranded migrant labourers dry ration be given to them.’’

Passing a slew of interim directions to ameliorate the miseries of migrant workers facing difficulties in wake of the recent surge in COVID-19 cases and restrictions imposed in several parts of India, the apex court on Thursday directed that dry ration be provided to them in the national capital region (NCR) under Atma Nirbhar Bharat Scheme' or any other scheme by the Centre and governments of Delhi, Uttar Pradesh and Haryana.

A bench of Justices Ashok Bhushan and M R Shah said the Centre may also issue instructions to the Ministry of Railways to take necessary and adequate measures to cater to the need of migrant workers.

The top court passed the order on an application filed by three activists who sought directions to the Centre and states to ensure food security, cash transfers, transport facilities and other welfare measures for migrant workers who are facing distress due to the curbs clamped in several parts of the country amid the pandemic.

“NCT of Delhi, state of UP and state of Haryana (for the districts included in the NCR) shall open community kitchen at well-advertised places (in the national capital region) for stranded migrant labourers so that they and their family members who are stranded could get two meals a day,’’ the bench said.

“NCT of Delhi, state of UP and state of Haryana (for the districts included in the NCR) shall ensure that adequate transport is provided to stranded migrant labourers (in the national capital region) who want to return to their home,” it said. It directed that district administration, in coordination with police, may identify such stranded migrant labourers and facilitate their transport either by road or train.

“Dry ration to migrant workers in National Capital Region under Atma Nirbhar Bharat Scheme or any other scheme be provided by the Union of India, NCT of Delhi, state of UP and state of Haryana utilising the public distribution system prevalent in each state with effect from May 2021,” the bench said.

It directed the Centre as well as the governments of Delhi, Uttar Pradesh and Haryana to file their replies to the application suggesting means and measures by which they shall ameliorate miseries of stranded migrant labourers.

The bench noted in its order that when the nationwide lockdown was imposed on March 24 last year amid the COVID-19 pandemic, the migrant labourers were the great sufferers because of cessation of their employment and they being left with no financial support to sustain themselves, there was large exodus from metro cities like Delhi and Bombay.

In May last year, the top court had taken suo motu cognizance of problems and miseries of migrant labourers amid pandemic and had passed a slew of directions, including asking the states not to charge fare from migrant workers and provide them food for free till they board trains or buses.

In its order passed on Thursday, the bench referred to the June 9 last year order passed by the top court in which it had dealt with issues, including on taking care of those migrant workers who had returned to their native places after cessation of their employment.

The apex court noted that it had granted two-week time to all the states and Union Territories (UTs) to submit affidavits in response to various aspects highlighted in the order and the Centre was also directed to bring on record different schemes which can be taken by migrant labourers for their welfare.

The bench noted that by its September 1 last year order, it had granted further two-week time to states and UTs to file their responses and the steps taken on the issues raised earlier by the court. “It appears that most of the states have not filed their specific responses on the aforesaid issues and if filed, they are inadequate," it said.

The bench said as the last chance, it is giving further 10-day time to NCT of Delhi, states of Uttar Pradesh, Haryana, Bihar, Gujarat, Maharashtra and Orissa to file their specific responses on the issues more particularly referred in its earlier orders and also the steps taken or to be taken and within how much time.