ccording to the IMF, Indian economy with a size of USD 2.69 trillion is the seventh largest in the world. 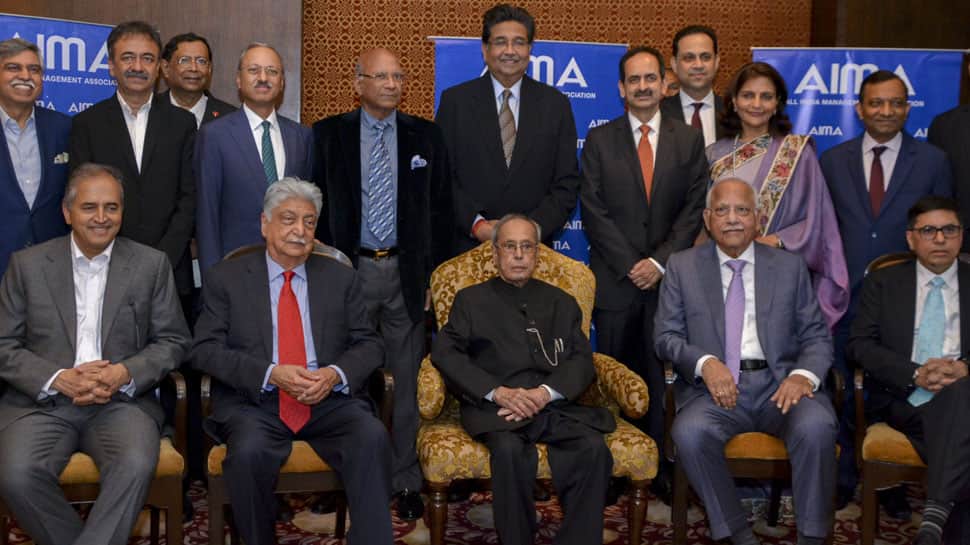 Former president Pranab Mukherjee on Monday said that 'quixotic heroism' cannot lead India as the nation needs leaders who can work for the people and meet their ever-increasing rising expectations.

Addressing corporates at AIMA Managing India Awards, Mukherjee, who was bestowed Bharat Ratna on Republic Day said, "Quixotic heroism cannot lead this nation. India needs leaders who can help them meet the nation's ever rising expectations. The country still has a long way to go before it is completely rid of poverty."

Expressing concern over the fact that just 1 per cent of Indians have control over 60 per cent of the total wealth of the country, the former president urged the corporates to take measures aimed at removing poverty from the country.

"The situation become all the worrisome if one looks at figure that more than 60 per cent wealth is held by just 1 per cent India's population. While such figure are definite burden on our national conscience, they also indicate that our growth needs to more inclusive then equitable. The one who are left behind drag others in the developmental narratives," Mukherjee said.

According to the IMF, Indian economy with a size of USD 2.69 trillion is the seventh largest in the world. As per a UN report, the GDP growth of India would jump to 7.6 per cent in 2019-20, Mukherjee said.

He added that over 270 million Indians have moved out of poverty line in the decade since 2005-06 and the poverty rate has also declined by half over the previous period. Mukherjee, however, noted that 269 million people are still living below poverty line.

According to the former president the profits which are focused at only adding to the wealth of only create vast inequalities in the society thus making the production becoming untenable, PTI reported.

Mukherjee remarked that India still needs to counter the growing distress in the agricultural sector. "We still need to put into place quality and affordable healthcare infrastructure in every area, nook and corner of the country. We need to put more young people to work in order to become a truly prosperous and proud nation. While india has made lot of progress on the quantitative side a lot of work is still needed on the quality aspect," Mukherjee noted.

The former president appealed the corporates to for the development of human capital of India. "The demographic dividend needs to be leverage which can only happen when their qualitative development of the education sector in the country. In addition to this we need to enhance quality of skill development. Not many of the IITs/IIMs alumni are passing on their knowledge and skill to next generation or even creating new knowledge through research. That needs to be changed," he said.