The Congress leader reiterated his support to farmers who have been protesting against the three new farm laws. 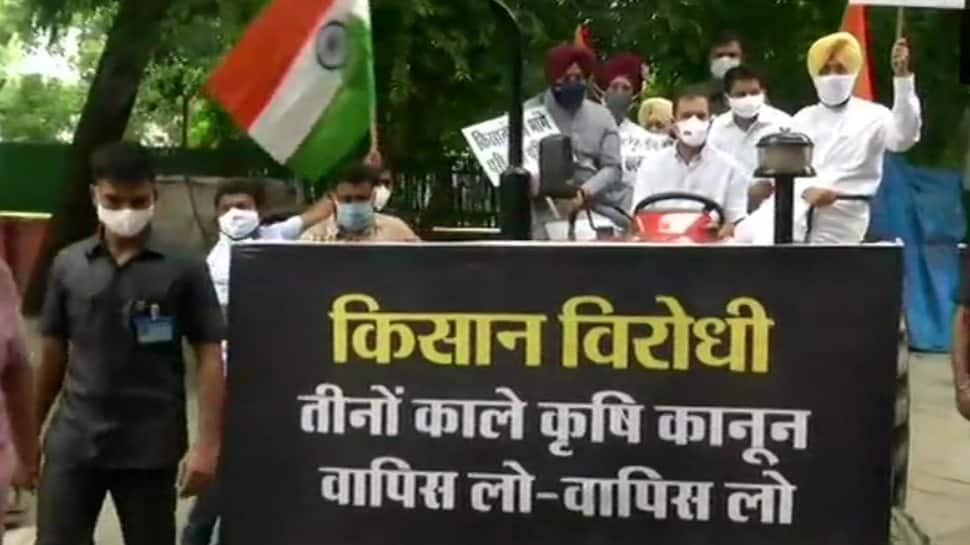 "They (Centre) are suppressing voices of farmers and not letting a discussion take place in Parliament. They'll have to repeal these black laws. The entire country knows these laws favour two-three big businessmen," Rahul Gandhi told reporters after driving a tractor to Parliament.

He added that as per the Centre, farmers are very happy and the protesting farmers are terrorists.

"But in reality, farmers' rights are being snatched away," said Rahul Gandhi.

As per Govt, farmers are very happy and those (protesting farmers) sitting outside are terrorists. But in reality, farmers' rights are being snatched away: Congress leader Rahul Gandhi after driving a tractor to Parliament pic.twitter.com/GGee9POAvC

Meanwhile, the Samyukt Kisan Morcha (SKM) has said that women will conduct the ongoing 'Kisan Sansad' at Jantar Mantar in Delhi on Monday as the farmers' protest against the three contentious farm laws completes eight months.

ALSO READ | Will not allow any minister to unfurl national flag: Haryana farmers warn ahead of tractor rally on Independence Day

The collective of over 40 protesting farmer unions said in a statement that several convoys of women farmers were reaching the Delhi borders to join the 'Mahila Kisan Sansad'.

The umbrella body of farmer unions has been protesting at Jantar Mantar since July 22.

The three laws -- The Farmers' Produce Trade and Commerce (Promotion and Facilitation) Act, 2020, The Farmers (Empowerment and Protection) Agreement of Price Assurance and Farm Services Act, 2020, and The Essential Commodities (Amendment) Act 2020 -- were passed by the Parliament in September in 2020. The farmer groups claim that these laws will end the mandi and MSP procurement systems and leave the farmers at the mercy of big corporates, an allegation that has been continuously refuted by the central government.