Noting that the trust has been formed on the instructions of the Supreme Court, Priyanka Gandhi said she demands on behalf of the people of the country that "the Supreme Court should get the entire scam investigated under its supervision". 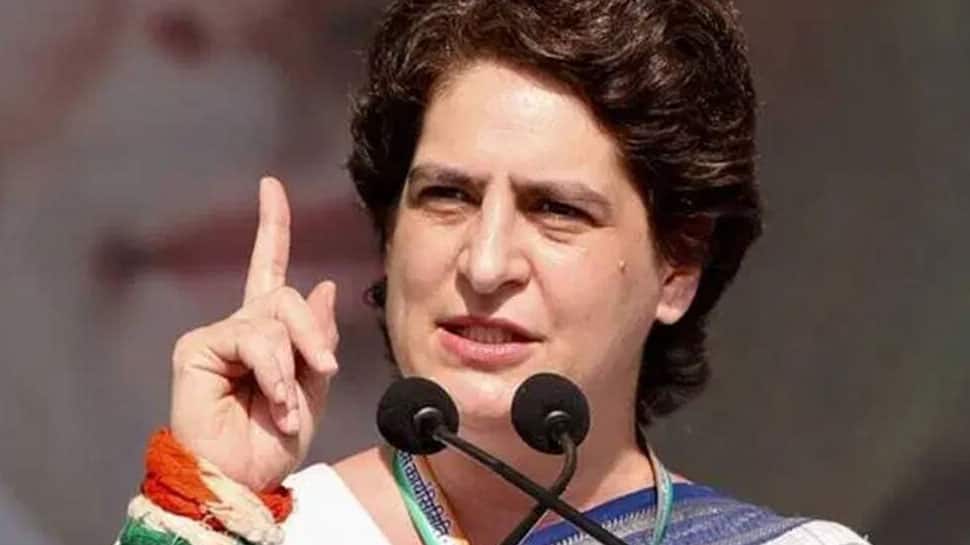 New Delhi: Congress general secretary Priyanka Gandhi Vadra has now demanded a probe under the supervision of the Supreme Court into allegations of corruption in a land purchase deal done by Ayodhya's Ram temple trust.

The Congress leader posted a statement on her Facebook page in which she said that any attempt to find an "opportunity in faith" is an assault on the faith of crores of Indians and a "big sin".

She highlighted that the Shriram Janmabhoomi Teerth Kshetra Trust was formed by none other than Prime Minister Narendra Modi and has people close to him as trustees.

"It is the responsibility of the prime minister that every penny of the offerings by the devotees in the name of Lord Ram should be used in the collective work related to faith and not in any scam," Priyanka said in a statement in Hindi. 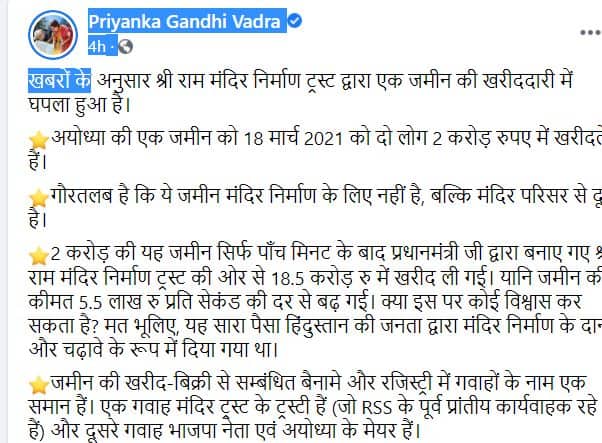 Noting that the trust has been formed on the instructions of the Supreme Court, Priyanka Gandhi said she demands on behalf of the people of the country that "the Supreme Court should get the entire scam investigated under its supervision".

Refuting the allegations of corruption and financial misconduct, trust general secretary Champat Rai had on Monday asserted that the organisation is committed to full transparency.

"We are applying full transparency in the purchase of land," he said, adding that the money is transferred online into the bank accounts of the sellers. The trust is in charge of the construction of the Ram temple.

Countering him, Priyanka Gandhi said that according to reports there is a "scam" in the purchase of land by the Shriram Janmabhoomi Teerth Kshetra Trust. "On March 18, 2021, two people bought land in Ayodhya for Rs 2 crore. It is worth noting that this land is not for temple construction, but is away from the temple premises," Priyanka Gandhi Vadra said.

This land of Rs 2 crore was bought after just five minutes by the Trust set up by the prime minister for Rs 18.5 crore, Priyanka Gandhi alleged that means that the price of land increased at the rate of Rs 5.5 lakh per second, she pointed out.

"Can anyone believe this? Don't forget, all this money was given by the people of India in the form of donations and offerings for the construction of the temple," the Congress leader said.

She claimed that the names of the witnesses in the deed and registry related to the sale and purchase of land are the same. One witness is a trustee of the temple trust who has been a former high-level functionary of the RSS and the other is a BJP leader and mayor of Ayodhya, she said.

In a statement issued by the secretary of the trust, it has been said that the rates of land have increased, and that is why this much payment has been made, Priyanka Gandhi said. If calculated on circle rates, the price of land in the area will be around Rs 5 crore, she added.

"Inspired by faith and devotion, crores of people of the country made offerings to the temple of Lord Ram. Many of our sisters in reverence towards Lord Ram and Mother Sita offered their deposits at their feet," Priyanka Gandhi said.

In a historic verdict on November 9, 2019, the Supreme Court had cleared the way for the construction of a Ram temple on the disputed Ram Janmabhoomi- Babri Masjid site in Ayodhya.