Jaswant Singh, who passed away on Sunday morning, held Defence, External Affairs and Finance portfolios in Atal Bihari Vajpayee`s government. He was one of the founder members of the BJP. 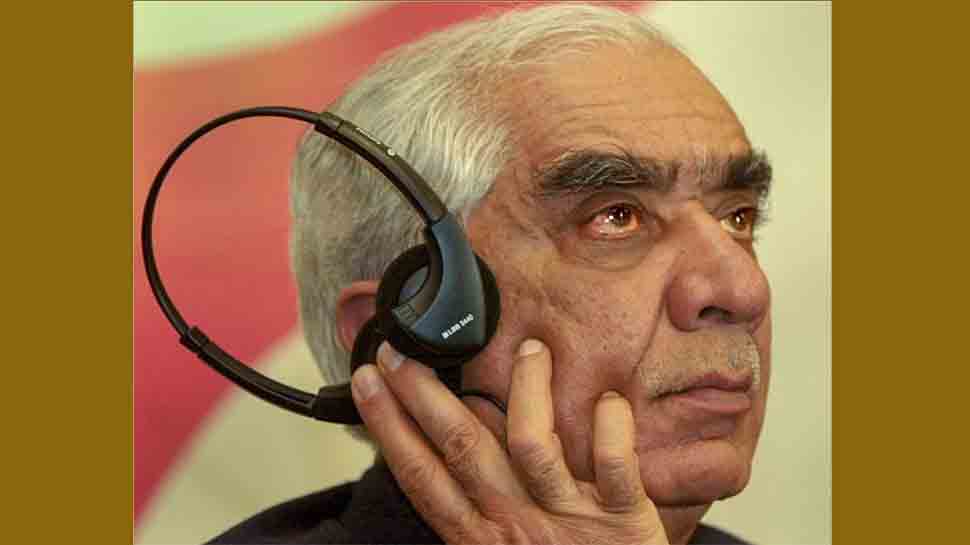 NEW DELHI: In coma for the last six years, former Union Defence Minister Jaswant Singh breathed his last on Sunday. He was 82 and died after a prolonged illness.

In 2014, he was admitted to the Army (Research and Referral) Hospital in Delhi following a severe head injury after he suffered a fall at his residence.

Indian Army Research and Referral hospital in Delhi stated that Singh had a cardiac arrest on Sunday morning. "Despite the best efforts of the attending team of specialists to resuscitate him, he could not be revived and passed away at 6.55 a.m. on September 27 2020."

Jaswant Singh held Defence, External Affairs and Finance portfolios in Atal Bihari Vajpayee's government. He was one of the founder members of the BJP.

Given that he had retired as a Major-rank officer from the Indian Army, it was no surprise that he was very punctual in his meetings with different people. And even though he was from an Army background, he not only handled the porfolios of defence, but also finance and external affairs in the Atal Bihari Vajpayee governments. He was one of the key Ministers who were in the forefront when Vajpayee's government was in power at the Centre at different points in time.

Jaswant Singh, who hailed from Rajasthan, first served as the Union Finance Minister in the shortlived Vajpayee government in 1996. He became the External Affairs Minister in the next Vajpayee-led government (1998-2002). Later, he was again given the charge of finance in 2002. The veteran leader was also Deputy Chairman of then Planning Commission at one point in time.

Considered close to Atal Bihari Vajpayee and LK Advani, the BJP leader was made the Defence Minister following the resignation of George Fernandes after the latter's name cropped up in a defence scam.

An astute politician, Jaswant Singh hogged media limelight the world over when he was tasked to hold talks with the Taliban for the release of passengers of an Indian Airlines flight hijacked in December 1999. He even escorted three terrorists, accused of various crimes that included the 2008 Mumbai terror attacks, to Afghanistan to swap in lieu of the safe release of 190 passengers.

After the 1998 nuclear tests by India, Jaswant Singh was deputed by then Prime Minister Vajpayee to engage the US in strategic talks.

After the BJP party lost power at the Centre in 2004 to the United Progressive Alliance, Jaswant Singh served as Leader of the Opposition in the Rajya Sabha from 2004 to 2009.

The veteran leader stirred a controversy after the BJP suffered its second successive defeat in the 2009 Lok Sabha elections by circulating a note to demand a thorough discussion on the poll debacle.

He again faced a backlash in 2009 from certain quarters after a book authored by him on Pakistan leader Muhammad Ali Jinnah, entitled 'Jinnah: India-Partition-Independence' was released. He had written sympathetically about the founder of Pakistan. Later, the BJP leader was marginalised within the party and subsequently expelled.

He was reinducted into the party after 10 months but faced a second expulsion a few years later. In 2014, he had a bitter fallout with the party after he ws denied a Lok Sabha ticket to contest from Barmer in Rajasthan. He, however, decided to challenge the BJP decision and fought the election as an Independent candidate but lost to Colonel Sona Ram, fielded by his former party. This was the last election he contested as an Independent.

In the 2014 Lok Sabha polls, Singh had declared his assets in an affidavit, according to which he owned a herd of 51 Tharparkar cows and 3 Arabian horses among other movable assets.

He told that he has 51 cows and three Arabian horses. They have cows of the Tharparkar variety which are cows of the local species and are kept in their farm in Jaisalmer and Jodhpur. While two horses were gifted to him by Prince of Saudi Arabia, one was born in India, said the affidavit submitted by him to the election commission. Singh owns one tractor, one fiat car, one Tata Safari and one Tata Marina car and his wife has three vehicles, including two Toyota Innova, it said.

Bihar polls: What the recent crossovers from one alliance to another indicate