Satish Mishra stressed that the BJP was rattled by the SP-BSP alliance and the leaders of saffron party have lost their mental balance fearing defeat in the upcoming Lok Sabha polls. 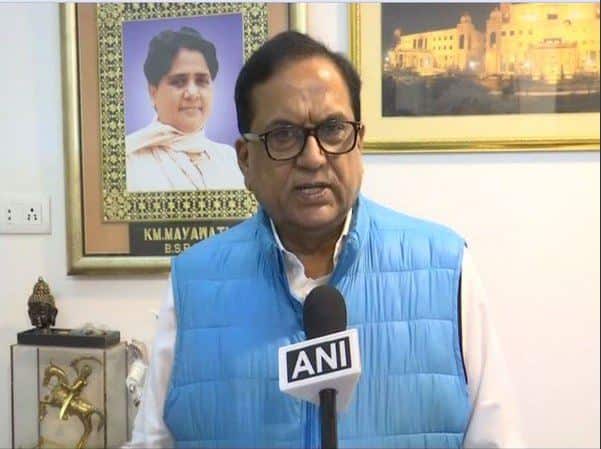 LUCKNOW: Responding to BJP MLA's Sadhana Singh's remark that Mayawati is "a person worse than an eunuch", senior BSP leader Satish Chandra Mishra on Saturday night said that the BJP MLA from Mughalsarai is "mentally ill".

Singh had made the distasteful remark while addressing a public gathering. Though she did not directly mention the infamous Lucknow guest house incident, where BSP supremo Mayawati and some other BSP leaders were attacked by Samajwadi workers, Singh said that a woman who underwent a `chirharan` (disrobe) is now compromising with the perpetrators, "she is worse than an eunuch.

Mishra stressed that the BJP was rattled by the SP-BSP alliance and the leaders of saffron party have lost their mental balance fearing defeat in the upcoming Lok Sabha polls.

"The language used by BJP leader Sadhana Singh against our party President Mayawati shows the level of the BJP. This shows that BJP is disappointed and frustrated with the SP-BSP alliance. They have no strength to win even a single seat in Uttar Pradesh. The level of language shows their mental illness. Such people should be admitted to the mental hospital of Agra or Bareli. The people of this country this time will show BJP its real place. They have lost their mental balance in fear of losing the election in Uttar Pradesh," Mishra told ANI.

SC Mishra(BSP) on Sadhna Singh's (BJP) remark on Mayawati: The words she used for our party chief shows the level of BJP. After the announcement of this coalition (SP-BSP), BJP leaders have lost their mental balance & they should be admitted to mental hospitals in Agra & Bareilly pic.twitter.com/py4L7c2z9c