Salman Khurshid posted a message on social media on Saturday in which he repeated that Rahul Gandhi should once again take charge as Congress president and he also advised his party colleagues to face the truth and take steps in order to resurrect the party. 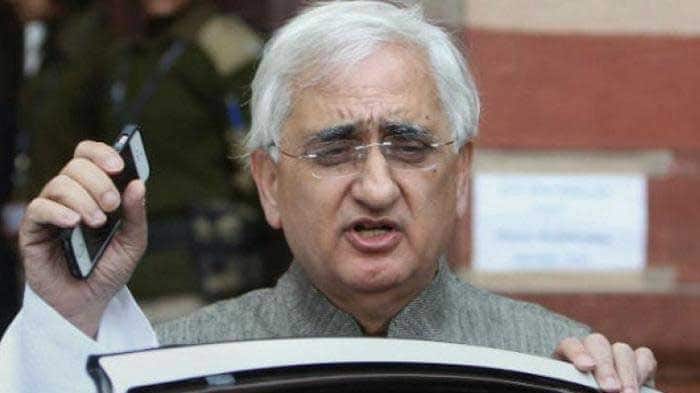 Senior Congress leader Salman Khurshid, who is facing severe criticism from his party colleagues for his statement on former Congress president Rahul Gandhi, on Saturday slammed his critics, saying those criticising him are either "hypocritical" or "heartless machines".

Khurshid posted a message on social media in which he repeated that Rahul Gandhi should once again take charge as Congress president. He also advised the Congress leaders to face the truth and take steps in order to resurrect the party.

The former Union Minister is facing flak from party colleagues for his earlier remark in which he had said that Congress president Rahul Gandhi decided to "walk away" after facing defeat in 2019 Lok Sabha poll.

"Some colleagues in the party said these remarks hurt the party. It will hurt to say let us find out why we are hurt! It will not hurt if we continue to suffer hurt caused to us by the adversary? To show courage and fortitude and not cry is character but to pretend we have no pain is silly and may be even fatal," Khurshid wrote.

"My critics are either hypocritical to deny pain or plain simple impervious, heartless machines that know not the spiritual dimension of pain," he added.

Khurshid reiterated that Rahul is Congress' leader and said, "He should return as President of our grand party that Soniaji will continue to inspire. We have taken a blow but we will rise again to rule over the hearts and minds of our beloved people."

He said that Congress "can give India the life of freedom and fulfillment where the head is held high by one and all without fear and favour. Each post along the path will be approached to conquer."

The senior Congress leader said, "Victories will not cause arrogance, defeats will not cause doubt in our cherished values. But convenience and adversity, far less the machinations of the BJP, must not force compromise on our values."

He said it`s time to do away with "symbolism and adopt Satyagrah."

"Undoubtedly, liberal parties have become self-conscious about the methods used by the BJP to win the landslide mandate. This is sadly feeding the monster of misrepresentation and deceit because there is no alternative narrative. Caution is understandable, but psychological retreat will be disastrous. Gnawing fear of further defeats will almost certainly deliver us to defeat," Khurshid said.

"We must not retreat from our convictions because of contrived notions of the mood of the nation. To bide time may be good strategy, but to be afraid to speak is simple cowardice. I have been taught to be a Congress soldier, not to be a coward," the former Union Minister said.

Khurshid also raked up Kashmir issue and said, "All who love India dearly cannot be mute spectators of the plight of J&K. There is no gain saying that Pakistan has chosen to be our enemy but that applies to them more forcefully vis a vis the people of J&K," he wrote.

"It matters not that our brothers and sisters of Kashmir have consistently disappointed us and stymied opportunities to bond with the rest of India. But we do not tire saying that it is our problem. "Be that as it may, it is a problem nevertheless. We have no option or duty other than solve the problem but that does not mean that we crush the protagonists. Extraordinary situations call for extraordinary steps and endeavour but then it needs extraordinary hearts and minds too as well," he added.