Save Constitution, save India: Congress to take out flag marches against CAA on 134th foundation day

Congress president Sonia Gandhi will unfurl the party's flag at the AICC headquarters in Delhi today to mark the occasion. 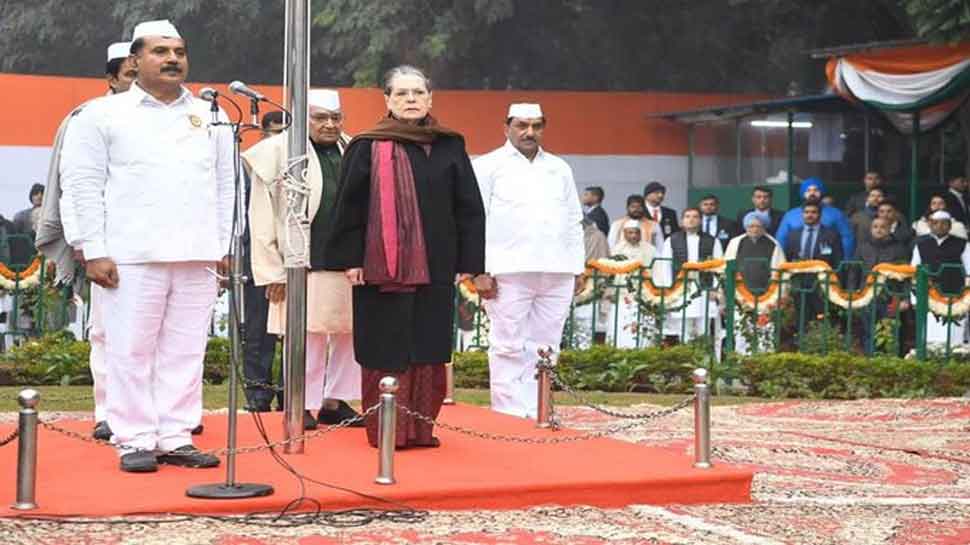 New Delhi: Amid raging protests against the Citizenship Amendment Act, the Congress Party will on Saturday (December 28) take out protests marches across the country on its 134th foundation day to convey its 'Save Constitution-Save India' message to the people.

Congress president Sonia Gandhi on Saturday morning unfurled the party's flag at the AICC headquarters in Delhi to mark the occasion. Rahul Gandhi, on the other hand, will pay a day-long visit to Assam today to extend the party's solidarity to the people protesting against the contentious Citizenship (Amendment) Act, its senior leader said. The public meeting is due at Khanapara Veterinary Field on Saturday and has been named 'Ashtitwa Rakhyar Samabekh.' Rahul will visit the family of teenager Sam Stafford who was killed in police firing against the new citizenship law. The 17-year-old Stafford was a drummer and a budding musician has become a symbol of anti-CAA protests.

Rahul will also visit the family of Dipanjal Das in Kamrup who also died in police firing during the agitation.

The All India Congress Committee (AICC) General Secretary KC Venugopal told media persons that the party will celebrate its foundation day by hoisting its flag at the AICC headquarters. After flag hoisting in the respective state capitals, Presidents of Pradesh Congress Committees will undertake flag marches. They will also read out the preamble of the Constitution in their respective languages, said Venugopal.

Venugopal accused the Prime Minister and the Home Minister of being contradictory while giving statements on the National Register of Citizens (NRC), the Citizenship (Amendment) Act (CAA) and on the National Population Register (NPR). "The government has put itself in a bind on these issues with the PM (Prime Minister), Home Minister and Raksha Mantri (RM) making contradictory statements on different occasions. The CAA proposes to flout the guarantees of Article 14, in contravention of the Constitution of India," he said.

On Friday, anti-CAA protest rallies rocked Delhi, Mumbai, Ajmer, Assam, Uttar Pradesh and left other hundreds of protesters detained. In Uttar Pradesh, Police took action against nearly 20950 objectionable social media posts and registered 95 cases in the matter, till date. At least 125 people were arrested in connection with the case.