The police took four people into custody on charges of creating disturbances at the CM's rally in Muzaffarpur. 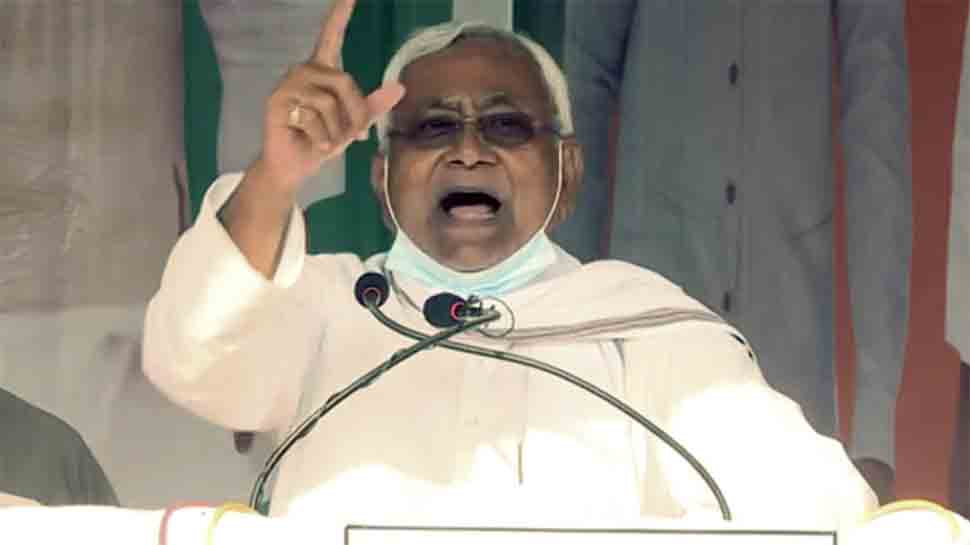 However, CM Nitish wasn't near the chopper and hence the culprits missed their target. The police took four people into custody on charges of creating disturbances at the CM's rally in Muzaffarpur.

The Sakra incident is in the series of protests Bihar CM is facing during his rallies in different parts of the state. At many places, CM Nitish was seen losing his cool and chided the protestors for 'acting on behalf of political rivals' and telling them that nobody is bothered even if they don't vote for him.

Addressing rallies in Sakra and Mahua, Nitish hit out at the RJD for making fake promises during polls to cheat the people. "Some leaders are making lofty promises before polls to cheat people, they have no genuine interest in work, whereas we have translated all our promises into reality," Nitish said taking a swipe at Lalu Prasad's headed party while speaking at Mahua.

He said while the RJD cared for one family (of Prasad) and some caste and community but our successive governments have worked for promoting interests of all caste and creed.

"For some family means wife, sons and daughters for me Bihar is the family for whom we work tirelessly," the chief minister said, taking a jibe at his bete noire RJD supremo Lalu Prasad.

Nitish addressed rallies at Sakra and Kanti in Muzaffarpur district then he moved to neighbouring Vaishali district where he spoke at public meetings in Mahua and Mahnar assembly seats.

Mahua constituency is in the news because Lalu Prasad's elder son Tej Pratap Yadav, who represented it in the outgoing assembly, has relinquished it and moved to Hasanpur constituency in Samastipur district.

Mahnar too is in the media headlines because it includes the native place of veteran socialist leader Raghuvansh Prasad Singh, who had quit RJD before his death last month. His son Satya Prakash Singh has joined JD(U) headed by Nitish Kumar.