BJP has termed the proposed SP-BSP alliance as ''opportunistic and anti-people.' 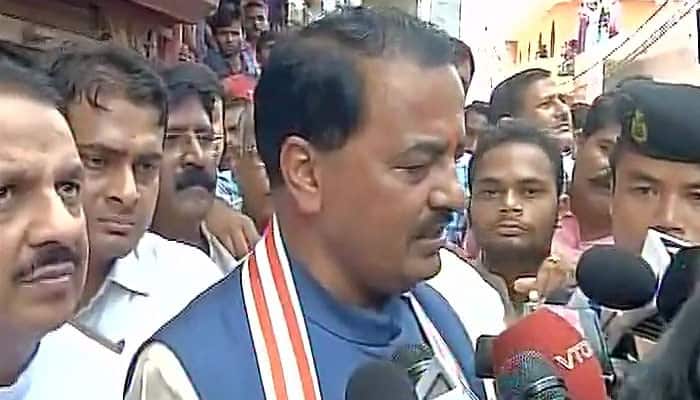 NEW DELHI: Uttar Pradesh Deputy Chief Minister Keshav Prasad Maurya has said that the proposed alliance between Samajwadi Party (SP) and the Bahujan Samaj Party (BSP) will not affect the electoral prospects of BJP as the country is firmly standing behind Prime Minister Narendra Modi.

The senior BJP politician from UP further expressed confidence that his party will get a huge mandate in the 2019 Lok Sabha polls and Narendra Modi will become the Prime Minister again.

''Whether SP-BSP ally or not, we have nothing to say on it nor BJP will we be affected. The country is firmly with Modi ji and people want to see him as the PM again,'' Maurya said.

KP Maurya,UP Deputy Chief Minister: Whether SP-BSP ally or not, we have nothing to say on it nor will we be affected. Country is firmly with Modi ji and people want to see him as the PM again pic.twitter.com/qSU9QytKxq

Attacking the two parties, the ruling BJP has termed the development as ''opportunistic and anti-people.''

Highly-placed political sources claimed on Saturday that the seat-sharing formula between the one-time arch-rivals has been sealed after a meeting of SP chief Akhilesh Yadav and BSP supremo Mayawati in New Delhi late on Friday.

The sources said that so far the Congress had not figured in the discussions for an alliance and that on the table for now were BSP, SP and Ajit Singh's Rashtriya Lok Dal (RLD) in the alliance.

However, there was no official word from both the parties on the alliance talks.

While SP leader Ram Gopal Yadav said reports of keeping the Congress out of the alliance were "fictional", Congress leader PL Punia said the party was preparing for elections in Uttar Pradesh saying "coalition is not important".

The two leaders are said to have decided to equally share 74 of the 80 seats while two seats will be left for the RLD headed by Ajit Singh and two kept "in reserve for last-minute political grasshoppers".

The alliance will also keep out of the contest in Rae Bareilly and Amethi, seats held by UPA chairperson Sonia Gandhi and Congress president Rahul Gandhi.

In 2014 too, the two parties had not fielded any candidates on these two seats.

With the Congress setting eyes on a large "share of the pie", especially after tasting recent electoral successes in Madhya Pradesh, Rajasthan and Chattisgarh, the SP-BSP combine, sources say, was "not too excited about the assimilation of the Congress in the opposition space".

Moreover, with a large chunk of their vote banks being common, the two regional payers don't seem to be too enthused with the Congress being under the 'gathbandhan' umbrella, a senior leader of the SP said.

He added that the Congress too was not okay with the idea of settling for anything less than 20 seats, something which seems impossible.

Congress leaders like Punia (who delivered Chhattisgarh to the Congress as its state in-charge) and UPCC chief Raj Babbar are reportedly of the view that the Congress should not "be sheepish in alliance negotiations any more" and should seek its pound of flesh.

They cite the example of 2009 when the Congress romped home with 22 Lok Sabha seats in UP, surprising many prophets of doom.

They also say that with Rahul Gandhi getting more "combative, direct and effective" in taking on the Narendra Modi juggernaut, the Congress stood better chances in going alone!

Not surprisingly, both the SP and BSP have given enough indications of not continuing their dalliance with the grand old party any longer.

Mayawati, known for her mercurial temperament, had put the Congress recently on notice by threatening to pull the rug from under the newly formed Madhya Pradesh and Rajasthan governments if the cases slapped on Dalits last year were not withdrawn.

She had also admitted earlier that she had reluctantly supported the Congress in both states, just to keep BJP at bay.

Akhilesh Yadav has also recently red-flagged the relations with Congress after the latter did not consider its lone legislator in MP for a ministerial berth. Yadav, in fact, went to the extent of saying that by doing so, the Congress had cleared his way in UP.