Tej Pratap spoke about how to unify and strengthen our party, ahead of 2019 (general election) and 2020 (Bihar assembly election), Tejashwi added. 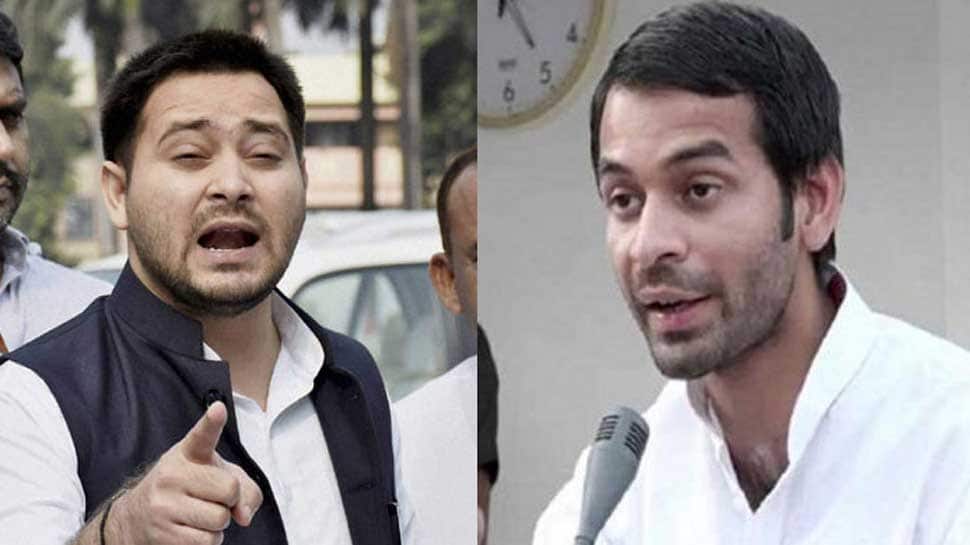 PATNA: Amid speculations over a rift with elder brother Tej Pratap Yadav, RJD leader Tejashwi Yadav on Sunday broke his silence and spoke in the lines of the former. Calling Tej Pratap his guide, the young RJD leader said it is evident that Tej Pratap spoke on the strength of the party.

Tej Pratap talked about how to unify and strengthen our party, ahead of 2019 (general election) and 2020 (Bihar assembly election), Tejashwi added.

"It is very evident Tej Pratap ji spoke on strength of the party. He spoke about how to unify and strengthen our party, ahead of 2019 (general election) and 2020 (Bihar assembly election). Unhone spasht kaha hai Tejashwi kaleje ka tukda hai. He is my brother and guide (He clearly said that I am very dear to him)," Tejashwi told news agency ANI.

Citing crime rates and discrepancies in the education system, Tejashwi said that their focus should be on how students were given 38 out of 35 marks and how 44 young girls were raped. He also mentioned that everyone in the party is working to strengthen it.

"All are working to strengthen the party. We shouldn't make mountain out of a molehill. We must focus on discrepancies in education, how students were given 38 out of 35 marks, how 44 young girls were raped. If you ignore this, Bihar isn't going to benefit at all," Tejashwi added.

Speaking on rift row rumours with younger brother, Tej Pratap had earlier denied the family infighting and claimed the rumours to be false. He clarified that Tejashwi is very close to him and the duo shares a good bandwidth.

Tej Pratap, the eldest son of RJD supremo Laly Prasad Yadav, said that he has no grudge against his family. He, however, expressed unhappiness with party state president RC Purve. The RJD leader accused Purve of ignoring the youth workers.

"All this news of family infighting etc is false, there is no such thing, I have nothing against Tejashwi and Lalu ji but yes some other senior leaders in the party are sidelining youth workers. The state President RC Purve is ignoring workers," Tej Pratap Yadav had said.

On Saturday, Tej Pratap, 29, accused some members of his party of trying to create a feud between the two brothers.

Blaming the party members for not receiving his phone calls, Tej Pratap had said that he was determined to eliminate those anti-social elements from the party.

The 29-year-old RJD leader had also urged senior leaders to identify those people and expel them from the party.

The RJD leader had earlier tweeted hinting at his possible retirement from politics. In a tweet, he referred to epic tale of 'Mahabharata' and mentioned that he wishes to quit and hand over the throne to Arjun (Tejashwi Yadav) and go on a leave.

The party came under heat following the recent conviction of party president Lalu Yadav in several fodder scam-related cases. Tejashwi Yadav, who played a pivotal role after the formation of the grand alliance including RJD, Congress and Chief Minister Nitish Kumar-led JDU ahead of  Bihar Assembly elections, is more active in politics than his elder brother Tej Pratap.

Tej Pratap, who was a Cabinet Minister for Health in the Bihar coalition government, is not seen as the heir apparent to Lalu Yadav's legacy in Bihar where his party RJD was in power for nearly 15 years. Since Lalu has been jailed, Tejashwi is said to be managing the party affairs single-handedly.