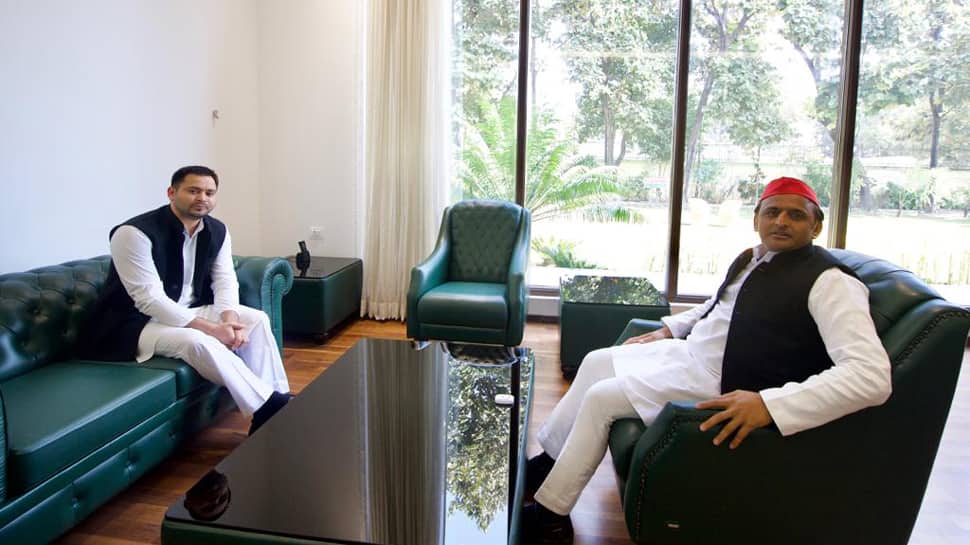 Alleging that the Bharatiya Janata Party (BJP) was imposing the agenda of the Rashtriya Swayamsevak Sangh, the RJD leader said, “If you remember, RSS chief Mohan Bhagwat has always said that caste-based reservation must be abolished. They are trying to replace our Constitution with RSS bunch of thoughts.”

Referring to the alliance between the SP and the BSP, the former Bihar deputy chief minister asserted that the BJP would be decimated in Uttar Pradesh and Bihar. He added, “I am sure people will give full support to the SP-BSP alliance.”

“I congratulate Mayawati ji and Akhilesh ji for forging this alliance in national interest. It was necessary in light of the situation in the country right now. Those who were slaves of British are in power right now,” the Yadav scion said.

He said that the BJP was in power in 115-118 seats in Uttar Pradesh, Bihar and Jharkhand combined, adding that with the newly formed SP-BSP alliance in UP and the Mahagathbandhan in Bihar, “BJP will go down to less than 100 seats in the three states”.

Tejashwi also used the opportunity to target the Central Bureau of Investigation (CBI) and the Enforcement Directorate (ED), saying that the central agencies had become alliance partners of the BJP.

After Tejashwi, Akhilesh Yadav launched a scathing attack on the BJP, claiming that people across the country were angry with the NDA government. He alleged that while traders were facing trouble, youth were not getting jobs.

The Samajwadi Party leader said that people of Uttar Pradesh and Bihar would have been happy had the bullet train been introduced in these states. “We wanted bullet train to go from Delhi to Lucknow to Patna to Ranchi to Kolkata, instead they decided to launch it between Ahmedabad and Mumbai. And therefore people are angry.”

Akhilesh Yadav also targeted Uttar Pradesh Chief Minister Yogi Adityanath, saying, “The language that our Chief Minister uses is disturbing. At first he said ‘thok do’, then they referred to us as saanp-chhachhunder (snake and mole)…But we will never change our language no matter what he says”.