The former finance minister said the step was being taken keeping the upcoming Gujarat elections in mind. 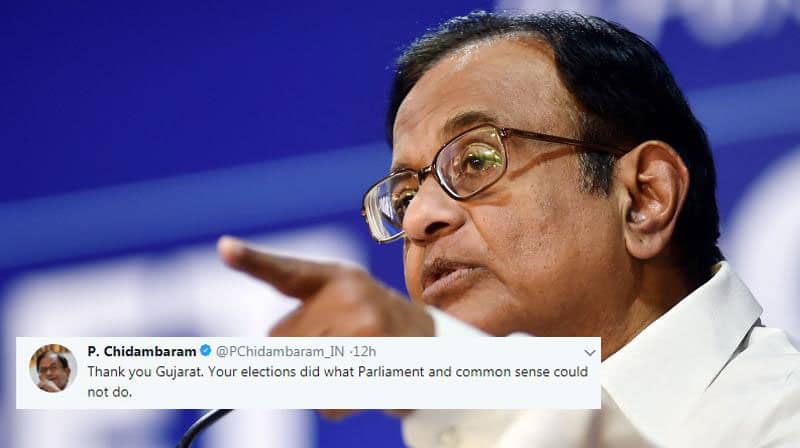 NEW DELHI: Veteran Congress leader P Chidambaram took a sly dig at the Narendra Modi government after the announcement of big changes in the rates for Goods and Services Tax. The former finance minister said the step was being taken keeping the upcoming Gujarat elections in mind.

"Thank you Gujarat. Your elections did what Parliament and common sense could not do," he tweeted.

In a series of tweets, Chidambaram said that the government had learned its lesson belatedly. "Congress is vindicated. I am vindicated. The merit of capping GST at 18% is now recognised," he said.

Ahead of the government decision, Chidambaram had on Thursday said that a "shower of changes" are expected from the GST Council meeting in Guwahati and the "panic-stricken" Modi government has no option but to change the new tax rates.

The GST Council on Friday reduced tax rate on a wide range of mass use items - from chewing gums to detergents -- to 18 per cent from current 28 per cent. The all-powerful Council pruned the list of items attracting the top 28 per cent tax rate to just 50 from 227 previously.

Modi hailed the recommendations made by the GST Council and said that it will further benefit the people and strengthen the tax regime. He also said public participation was at the core of the government's functioning and that all its decisions were "people-friendly and people-centric".

"The recommendations made by the GST Council today will further benefit our citizens and add strength to the GST. These recommendations are in the spirit of the continuous feedback we are getting from various stakeholders on GST," he tweeted.

US to push for India's inclusion into 21-member APEC as Modi, Trump meet in Manila