Union Parliamentary Affairs Minister Pralhad Joshi said that the Prime Minister told the BJP MPs that by using this language, TMC has insulted the Parliament and people of the country who have elected MPs. 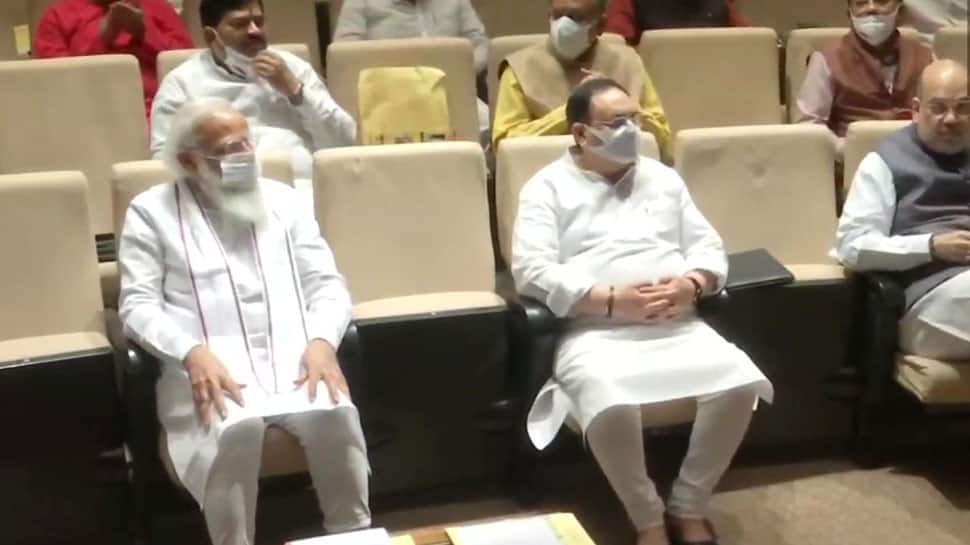 New Delhi: Prime Minister Narendra Modi on Tuesday hit out at the Congress-led Opposition for continuously disrupting the Parliament over the Pegasus alleged snooping scandal.

PM slammed opposition members for tearing papers in Parliament and making "derogatory" remarks on the way the important bills have been passed.

Hitting out at the Opposition during the BJP parliamentary meeting, the PM said, “They (opposition) are insulting the Parliament and the Constitution by not allowing the House to function properly.’’

The PM also took a strong objection to a tweet by Trinamool Congress (TMC) MP Derek O`Brien comparing the passing of legislation to the making of a "papri chaat".

Briefing reporters, Union Parliamentary Affairs Minister Pralhad Joshi said that the Prime Minister told the BJP MPs that by using this language, TMC has insulted the Parliament and people of the country who have elected MPs.

"Prime Minister was anguished at the language used. This happened for the first time as well that these people snatch papers from the minister`s hand and don`t apologize for doing so. This shows arrogance on part of the opposition," Joshi said while quoting the Prime Minister.

Such comments are "derogatory" of parliamentary procedure and esteem of elected representatives, Muraleedharan said quoting PM Modi. The conduct of the Opposition is an "insult" to Parliament and the Constitution, Joshi said, quoting the Prime Minister.

Union Minister V Muraleedharan said though PM Modi started the parliamentary party meeting with happy news of the GST collection of Rs 1.16 lakh crores and medals in the Tokyo Olympics, he was pained and anguished at the actions of the opposition.

"A tweet by senior MP about the passage of bills is derogatory of the proceedings and against the esteem of the elected representatives of the country. The Prime Minister also mentioned that we will not let any stone unturned to fulfil the commitment to the people of the country," the minister added.

Senior MPs under the leadership of J P Nadda felicitated and thanked PM Modi for the allocation of 27 per cent reservation for OBCs and 10 per cent for EWS in medical colleges.