Modi, who is in Seoul on a two-day visit to South Korea, made a veiled attack on Pakistan's continued support to cross-border terrorism. 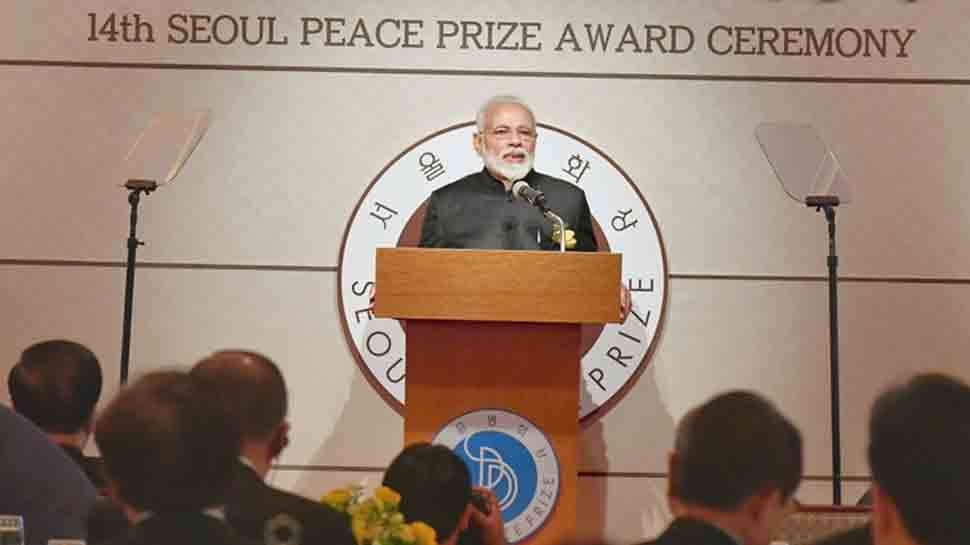 Seoul: Making a veiled attack on Pakistan's continued support to cross-border terrorism, Prime Minister Narendra Modi Friday said the time has come for the global community to "unite and act" to completely eradicate terror networks and their financing supply channels.

Asserting that India has suffered the pain of cross-border terrorism for over 40 years, Modi said the country's endeavour towards peaceful developments has only too often been derailed by this menace.

Modi, who is in Seoul on a two-day visit to South Korea, expressed his gratitude for the host country's support to India after the attack by a suicide bomber of Pakistan-based terror outfit Jaish-e-Mohammad (JeM) that killed 40 CRPF soldiers in Jammu and Kashmir's Pulwama district on February 14.

Addressing the media after his talks with President Moon Jae-in, Modi said that the time has come when the world, going beyond talks, should "unite and act" against terrorism.

Later, speaking at an event after receiving the prestigious Seoul Peace Prize for 2018, Modi said that while India has been the victim of cross-border terrorism for over 40 years, all nations today face this grave threat which respects no borders.

"Our endeavour towards peaceful developments has only too often been derailed by cross-border terrorism," he said in an apparent reference to Pakistan, which is accused of providing safe havens to several terror groups.

"The time has come for all those who believe in humanity to join hands, to completely eradicate terrorist networks, and their financing supply channels and counter terrorist ideology and propaganda. Only by doing so, can we replace hate with harmony, destruction with development, and transform the landscape of violence and vendetta into a postcard of peace," Modi added.

He recalled that a few months before the Seoul Olympics in 1988, an organization called al-Qaeda was formed. "Today, radicalisation and terrorism have become globalised and are the biggest threats to global peace and security," he said.

Modi also expressed his gratitude to President Moon for his condolences and support on the Pulwama attack. "We are committed towards strengthening our bilateral and multilateral cooperation against terrorism," he said.