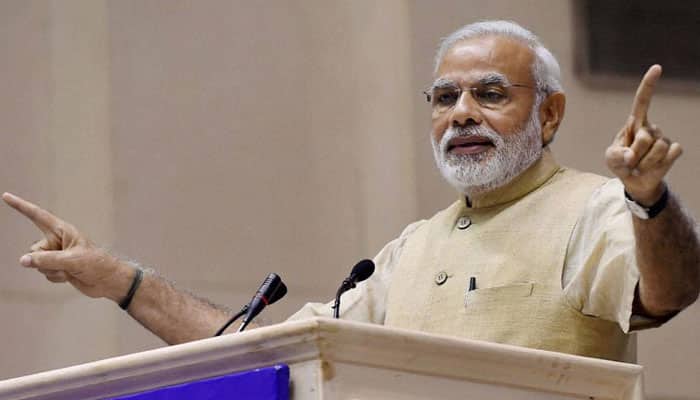 For the first time, since BJP's victory in Gujarat and Himachal state polls, Prime Minister Narendra answered a series of queries on game-changing economic reforms and big electoral wins in an exclusive interview with Zee Media. Talking to Zee News editor Sudhir Chaudhary, the Prime Minister – in an hour-long interview – discussed how his visit to World Economic Forum meeting at Davos in Switzerland is an opportunity for India to showcase itself on a global platform.

Here are highlights of the interview:

1. India at WEF meet in Davos

"Davos is a major platform in the financial world. Top business leaders gather there to deliberate upon the economic future of the world. India is the centre of attraction for the entire world. There are two reasons for that. First, our GDP is growing at a fast pace - and this has been accepted by leading agencies like the World Bank, Moody's etc. Second, due to our strong democratic values. It's a unique combination of both in India. And that's what has evoked everyone's interest. So it's an opportunity for India to showcase itself on a global platform like WEF in Davos," said PM Modi.

"My government has only one agenda for Budget - and that is development. And that's what you will see.”

“If you measure the work done by our government in these four years by only these two parameters, it's unfair. After nationalisation of banks, about 30-40 per cent of the population was out of banking system. We brought them into the system. Isn't that an achievement? Thousands of girls skipped schools because there were no toilets. We built those toilets for them. Isn't that an achievement?” said PM Modi.

“Elections absorb massive manpower. Soldiers are on election duty for 100-200 days in a year. Over 100 top officers from most states are acting as elections observers. With these officers on election duty, how will the state function? Our idea is to create a planned election system where the polling could be held on a certain week across the country at one time,” he said. “Logically speaking, holding different elections in different dates creates a burden on the exchequer. Politicians are always under stress. So I think both Vidhan Sabha and Lok Sabha elections should be organised simultaneously. It will save money and manpower,” he added.

“During UPA time, Gujarat and other states raised issues tax and finance. But none of our concerns were heeded. Hence, we (NDA) were forced to take economic and monetary reforms. GST is the product of that. We worked hard towards building the concept of one nation-one tax.” He further added the transfer to the new indirect tax system may cause some inconvenience to people but it will be hailed as visionary decisions in future.

Hailing the increase of foreign direct investment (FDI) in India, PM said, "Before 2014, the world didn't care about what India had to say. But after we came to power in 2014, the situation changed completely. For the first time in 30 years, India has a government with a full majority. This was noticed by the entire world. I witnessed it during the SAARC and G-20 meet. They are accepting us as a leader now. That's because we have done well on the domestic front. From day one, my government's focus has been on good governance, transparency, and this has given us results. India's ranking in ease of doing business jumped from 142 to 100. This resonated across the world. We have the mandate of world's largest democracy – 1.15 crore citizens."

“In one year, more than 70 lakh provident fund accounts have been added. Over 10 crore people have benefited from Mudra Yojana launched by the Centre has been extremely successful. Government initiatives have empowered small-scale entrepreneurs and informal sectors,” said the Prime Minister.

“If someone opens a 'pakoda' shop in front of your office, does that not count at employment? The person's daily earning of Rs 200 will never come into any books or accounts. The truth is massive people are being employed,” he said, further adding about GEM yojana – an online portal launched in association with all states.

“Every time I stand beside world leaders such as Vladimir Putin or Donald Trump, all I remember is that I am the representative of 1.15 crore citizens. They have given me the mandate to be here,” said Modi. On new world order, he said should not be limited to select subjects but continue to look into everything with a positive attitude. “On one hand, we should connect with the entire world, on the other hand, we should keep in mind our values.”

“This government’s achievements wouldn't be possible without support from the bureaucracy. The government machinery works with you when they see their leaders are working without any malice,” he said.

When asked about his intensive political campaign, PM Modi said, “I campaigned on similar lines during Gujarat Chief Minister days. What's new in this?"

On 2019 Lok Sabha elections, he said, "Over 1.15 crore citizens have given me the mandate to be here. I do not have the time to think about next elections."

Catch the full interview on Zee News on Saturday 8 pm.